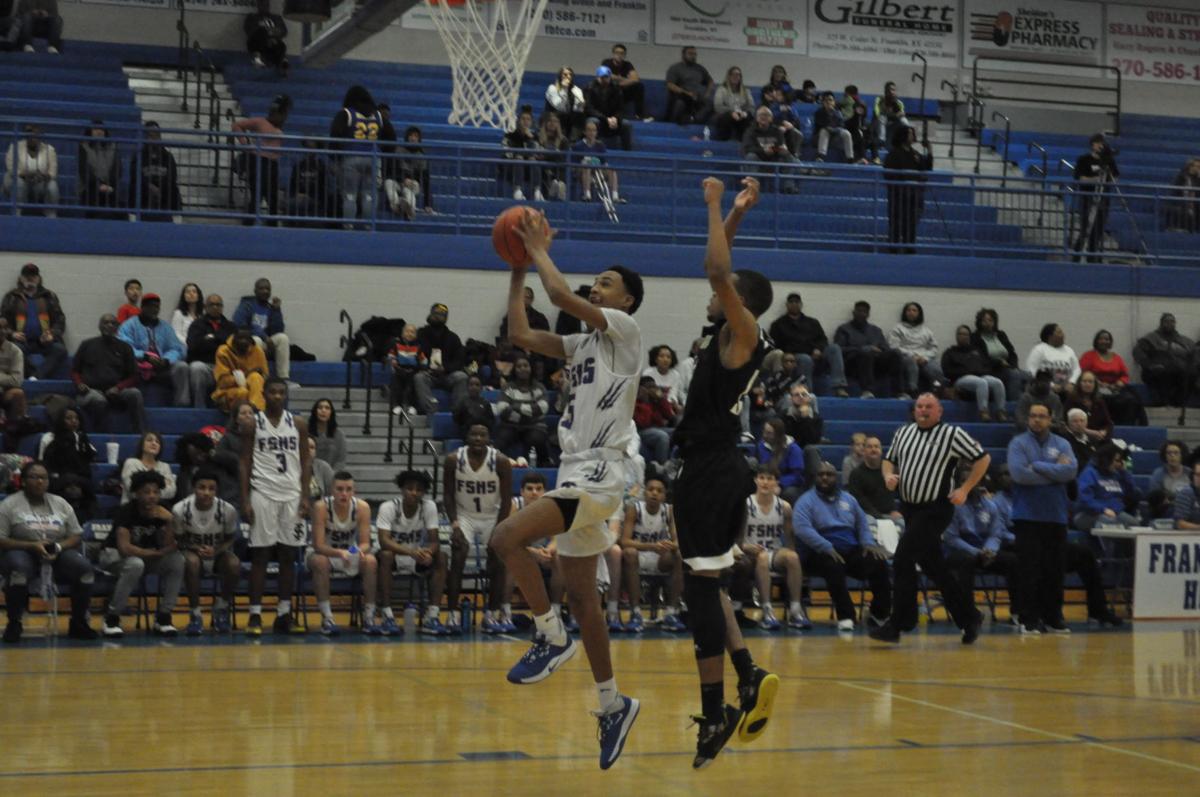 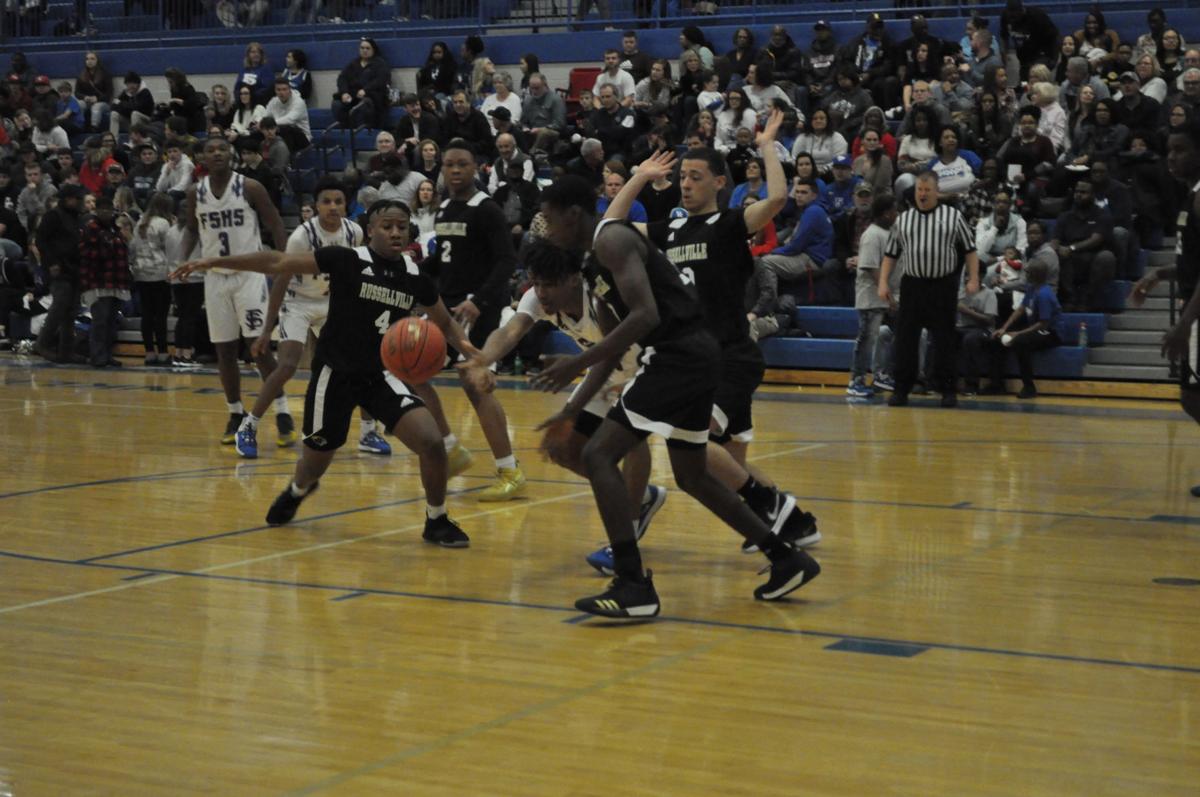 Wildcats’ junior Kyjuan Stutzman (4) battles for a loose ball with a pair of Russellville Panthers in the second half of their 13th District Basketball Homecoming game at the F-S Gym last Friday night. 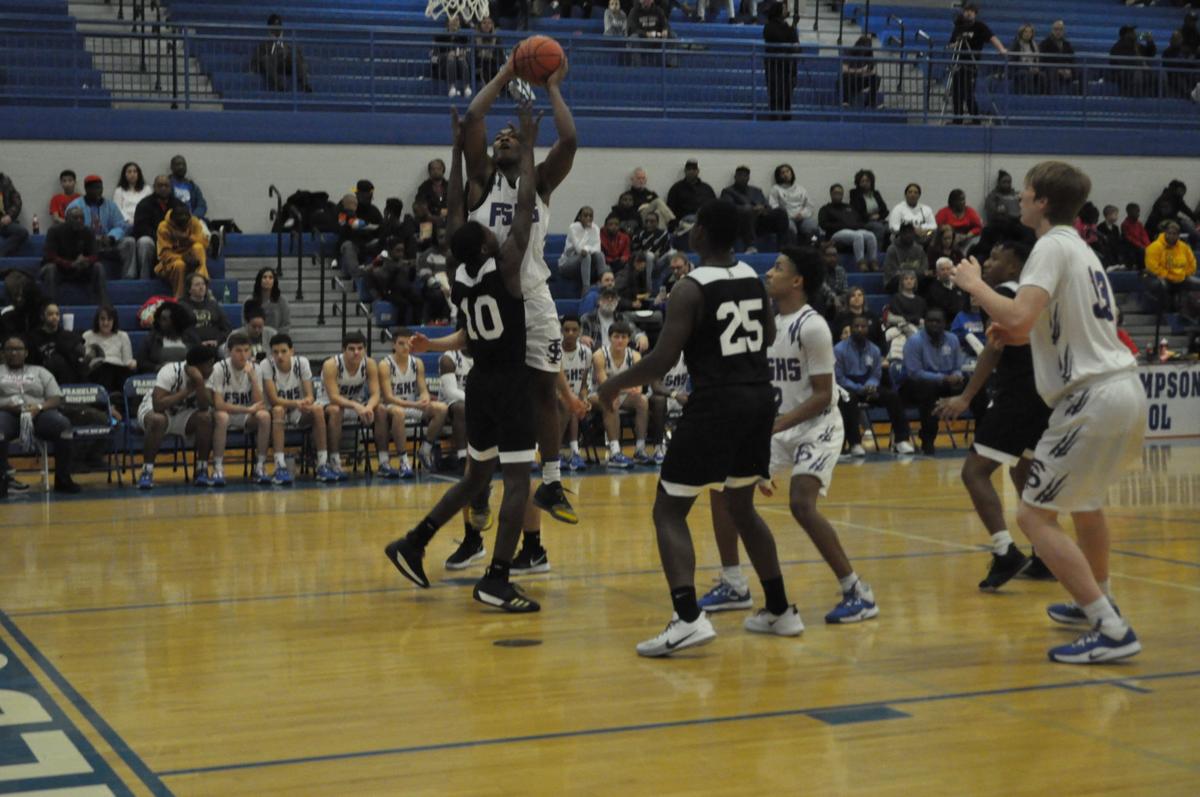 Wildcats’ junior Kyjuan Stutzman (4) battles for a loose ball with a pair of Russellville Panthers in the second half of their 13th District Basketball Homecoming game at the F-S Gym last Friday night.

With their 78-49 victory over the Russellville Panthers last Friday night for Homecoming, the Franklin-Simpson Wildcats secured the number two seed in the prestigious 13th District Boys Basketball Tournament that begins on Feb. 24 at Russellville High School.

The Wildcats finish 13th District play with a record of 4-2 and will play either Russellville or Todd County Central, depending on the outcome of their game on Friday night, in their opening round game of the district tournament.

The Wildcats made it rain in the F-S Gym in the 1st Quarter as they knocked down five 3-pointers, three from senior Dawson Knight and two from junior Kyjuan Stutzman. Knight scored nine points with Stutzman scoring eight points and senior Tedric Partinger, who had a traditional three-point play, added six points. The Panthers couldn’t make shots and were forced into committing turnovers as Franklin-Simpson led 29-9 after one.

“My confidence in shooting the ball has come back,” Dawson Knight said. “It’s the best time actually as we are towards the end of the season.”

The Wildcats made two more 3-pointers rain in the second quarter from senior Demarco Chatman and junior Andreyous Miller. Stutzman scored eight points with Miller pouring in seven points with five points each from Chatman and Partinger. Junior Josh Allen led the Panthers with five points with senior Devan Kimbrough adding four points as Franklin-Simpson nearly doubled up their points from the first quarter as they led 55-23 at halftime.

“We’ve been wanting to shoot the ball like that all year,” Spencer said. “Get the guys comfortable shooting the ball and tonight, it happened.“

The Wildcats extended their lead to as high as 33 points as Chatman scored five points and Stutzman adding three points. Allen led the Panthers with four points with junior Jaquis Todd knocking down their first 3-pointer of the game as Franklin-Simpson led 65-34 at the end of the third.

Both teams exchanged 3-pointers early in the fourth quarter as Wildcats’ Partinger and freshman DeMarcus Hogan knocked down the long distance shots while Panthers’ junior Jackson Hampton and Kimbrough knocked down the shots. Hampton scored five points with Kimbrough adding four points for Russellville. Hogan led Franklin-Simpson with five points with Partinger adding three as they led wire to wire for the 78-49 victory over Russellville.

“This win is huge. It put us back on track,” Spencer said. “Thought the guys shot the ball well which led to playing some great defense. They played well overall, super proud of them.”

Kyjaun Stutzman led all scorers with a game high of 21 points with Tedric Partinger scoring 14 points and Demarco Chatman adding 10 points for the Wildcats.

“It was Homecoming and we came out focused and ready to play,” Kyjuan Stutzman said. “This win is big. The community came out and supported us. We all played as a team and got the win.”

Josh Allen led the Panthers with a team high of 12 points with 10 points each from Xavier Coleman and Devan Kimbrough.

Franklin-Simpson’s final regular season home game will be on Tuesday night against the Warren East Raiders. It will be Senior Night where senior Lady Cat and Wildcats’ basketball players, cheer, dance and pep band seniors will be honored.

Tip-off time for the boys’ game will be at around 7:30 p.m. after the girls’ game at 6 p.m. followed by the Senior Night festivities.

1220 WFKN Franklin radio will broadcast Senior Night beginning at 5:50 p.m. The broadcast will be streamed on the Internet by going to www.network1sports.com and click on the “WFKN link” in the blue toolbar. Then press the WFKN Sports tab and click on the play button.