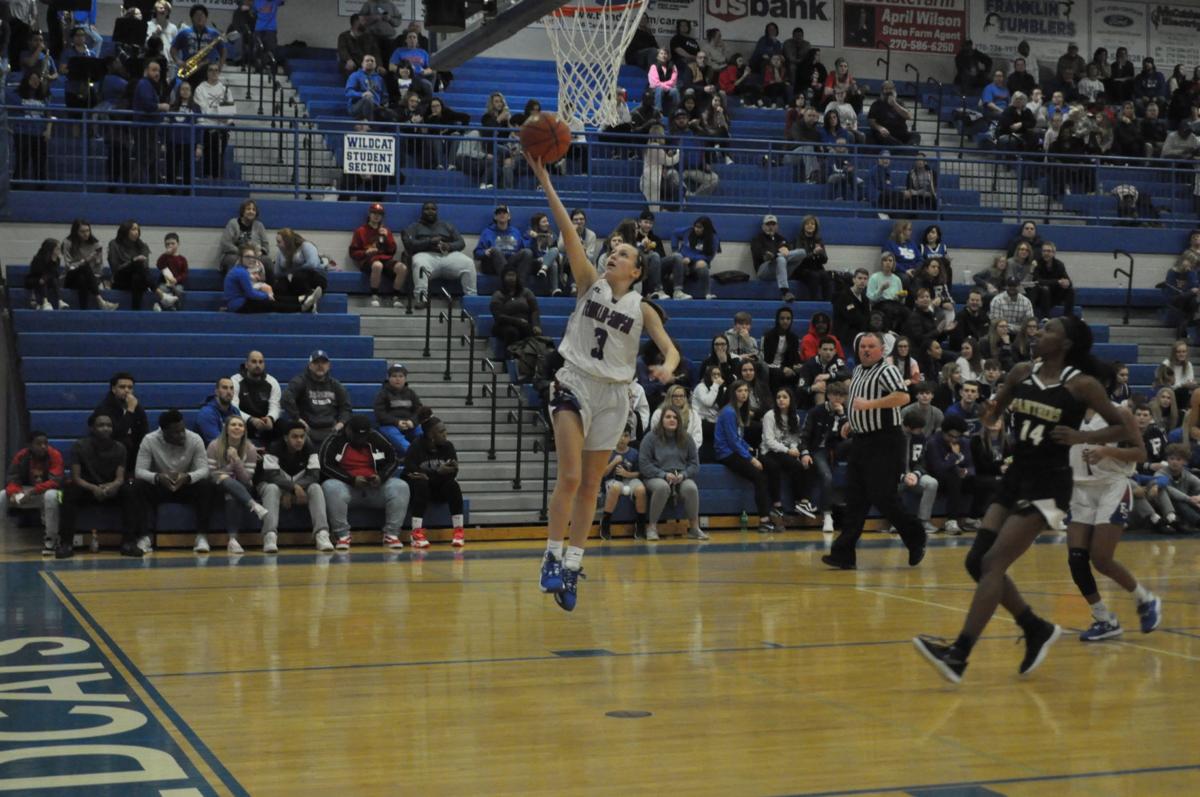 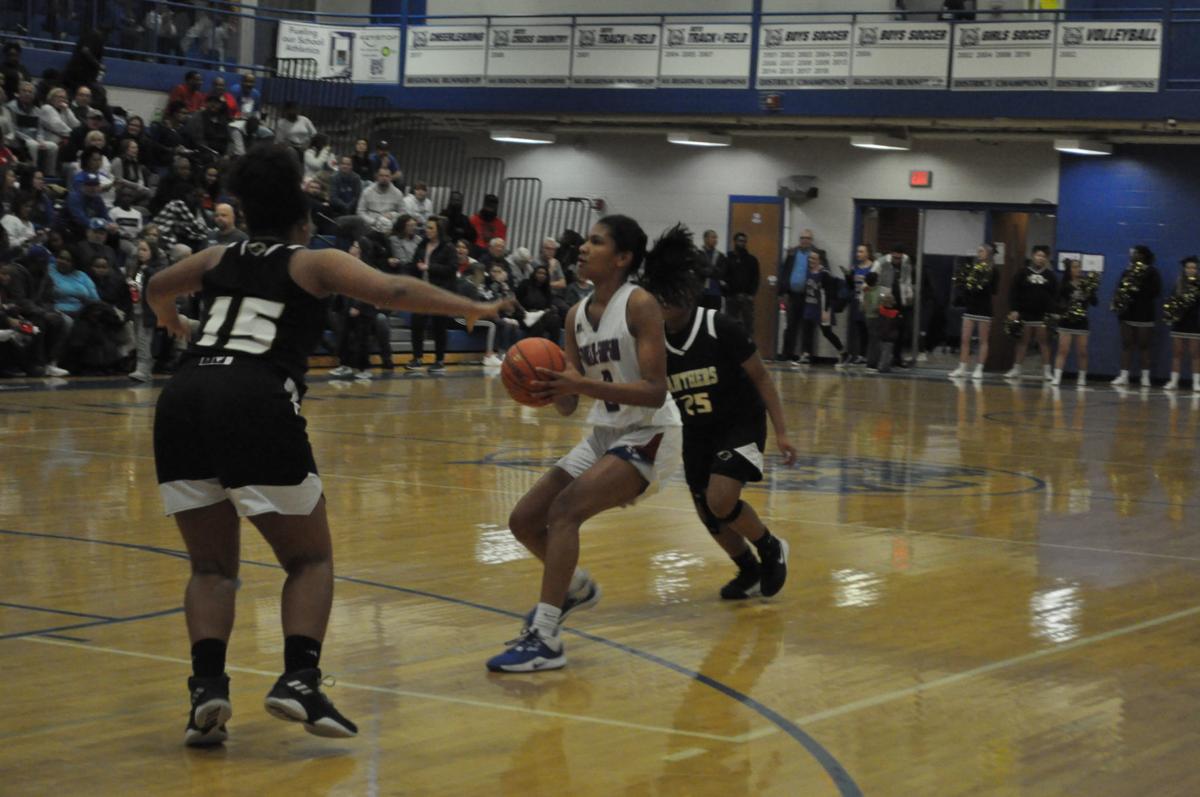 Lady Cats’ junior Alera Barbee (2) is set to take a jump shot between Lady Panthers’ freshman Brinley Mason (15) and junior Macaria Hines (25) during the first half of their 13th District Basketball game at the F-S Gym last Friday night. 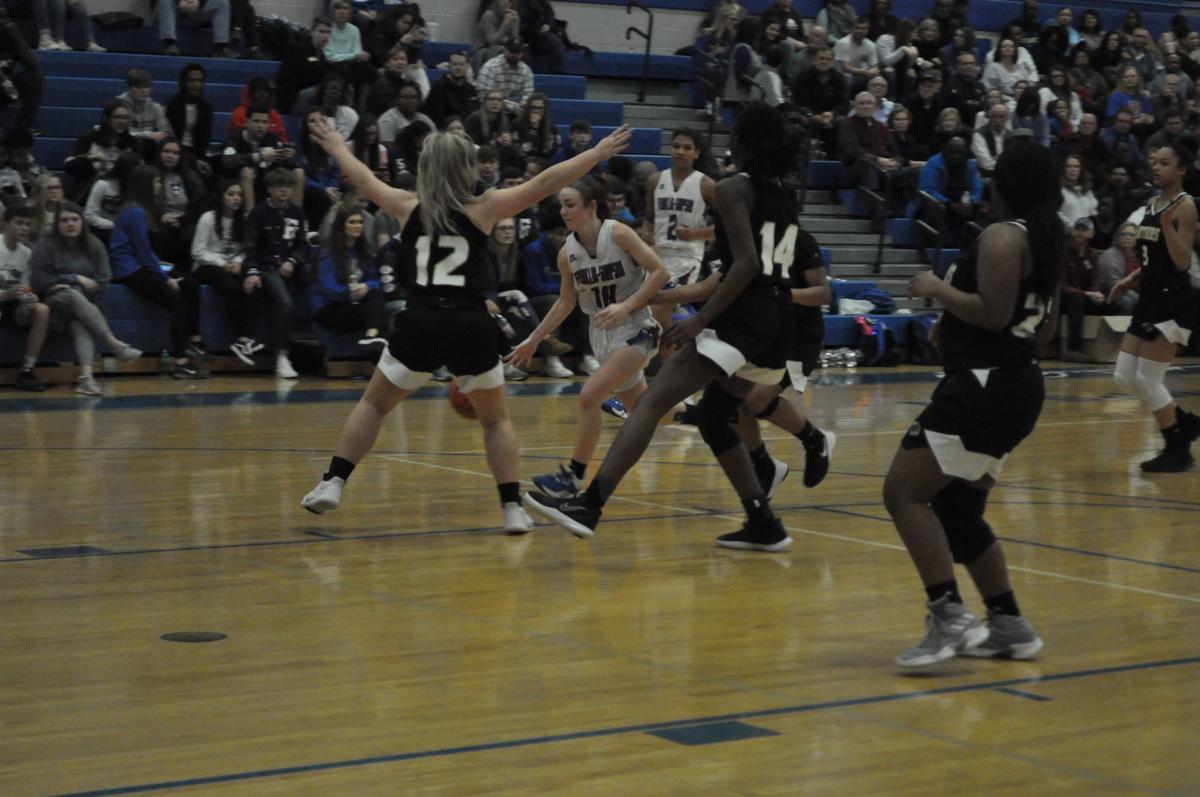 Lady Cats’ junior Alera Barbee (2) is set to take a jump shot between Lady Panthers’ freshman Brinley Mason (15) and junior Macaria Hines (25) during the first half of their 13th District Basketball game at the F-S Gym last Friday night.

“I think we got Russellville’s attention after the first time we played them. They had a chip on their shoulder and their two best players in (Amiyah) Collier and (Anastasia) Dowlen came to play. Hats off to them as they were the better team,” Lady Cats head coach Lex Lindsey said. “We gave up too many offensive rebounds and we have to get better at that and I really don’t know how we can. Dowlen is 6 foot 2 inches and we have four girls on the floor that are basically five foot two inches tall. I wish Hadley’s (Turner) knee was better and DaMyah’s (Hopson) situation was better and it’s one of those deals that we have to keep plugging along and try to do the best we can.”

The Lady Carts finish 13th District play with a record of 3-3 while the Lady Panthers are 2-3 in the district. Their final game is against Todd County Central, who are 0-5 in the district, this Friday night at Elkton.

Russellville jumped out to a 10-4 lead in the first quarter as sophomore Anastasia Dowlen scored six points during that stretch. Franklin-Simpson responded with baskets from juniors Alera Barbee and Kate Norwood. They also got a huge boost with a 3-pointer from eighth grader Katelyn McAlister as they trailed 12-11 at the end of the first.

With five points scored in a row from Norwood, the Lady Cats took their first lead of the game, 16-12 early in the 2nd Quarter. Five more lead changes with two ties occurred with the Lady Panthers taking the lead 26-23 on a 3-pointer from junior Macaria Hines, who scored seven points in the quarter along with five points from freshman Amiyah Collier. Norwood led Franklin-Simpson with seven points with McAlister adding four points as they trailed 32-26 at halftime.

The Lady Cats’ offense consisted of two 3-pointers from Norwood as they had a hard time knocking down shots. Their inability to score gave the Lady Panthers the opportunity to extend their lead as Dowlen scored four points and Hines added three points. Freshman Brinley Mason and Jirdin Morris each scored a basket as Franklin-Simpson trailed 43-32 after three.

Freshmen Le Le Partinger’s basket along with Conleigh Wilson’s 3-point shot got the Lady Cats to within right, 45-37. When Russellville needed a basket to stop Franklin-Simpson’s run, it was Dowlen as she scored seven points in the fourth quarter. Hines along with junior Chloe Whitescarver’s 3-pointers was the back breaker as those baskets put the game out of reach for the Lady Cats. Wilson scored five points along with three points from Barbee would not be enough as they lost a tough district game to the Lady panthers, 62-46.

“Anytime you get a district win, it’s a big win,” Lady Panthers head coach Cameron Jackson said. “Franklin-Simpson is a tough team. It’s unfortunate that they had some players go down but Lex (Lindsey) is a good coach and his team will always be prepared. We’ll see them one more time in the district tournament so it will be another tough game.”

Kate Norwood led the Lady Cats with a team high of 17 points as she was the only player that scored in double figures.

“We have four games to get ready for Russellville in the district tournament. I think they overlooked us the first time we played them. To be honest, we may have gotten lucky over there,” Lindsey said. “Tonight, they proved that they have a really good team and I don’t know what we can do to overcome the discrepancies that are faced in front of us right now. Russellville has to be feeling pretty good about themselves right now. They beat us by 20 points tonight and we’ll face them one more time and we’re going to do the best we can.”

Anastasia Dowlen led all scorers with a game high of 21 points with Macaria Hines adding 10 points for the Lady Panthers.

“Anastasia (Dowlen) has been a dominant defensive force all season long. She has over 1,000 rebounds already as a sophomore and continues to work on her offensive game and is getting better every game she plays,” Jackson said. “This was not Amiyah’s (Collier) best game but the biggest thing is that she kept her head in the game and played solid and steady. Macaria (Hines) has been up and down all season but she is a junior, one of our older and experienced players. Anytime she steps up and plays big for us, we’re tough to beat.”

Franklin-Simpson’s final regular season home game will be on Tuesday night against the Warren East Raiders. It will be Senior Night where senior Lady Cat and Wildcats’ basketball players, cheer, dance and pep band seniors will be honored.

Tip-off time for the girls’ game will be at 6 p.m. with Senior Night festivities taking place before the tip-off of the boys’ game.

1220 WFKN Franklin radio will broadcast Senior Night beginning at 5:50 p.m. The broadcast will be streamed on the internet by going to www.network1sports.com and click on the “WFKN link” in the blue toolbar. Then press the WFKN Sports tab and click on the play button.