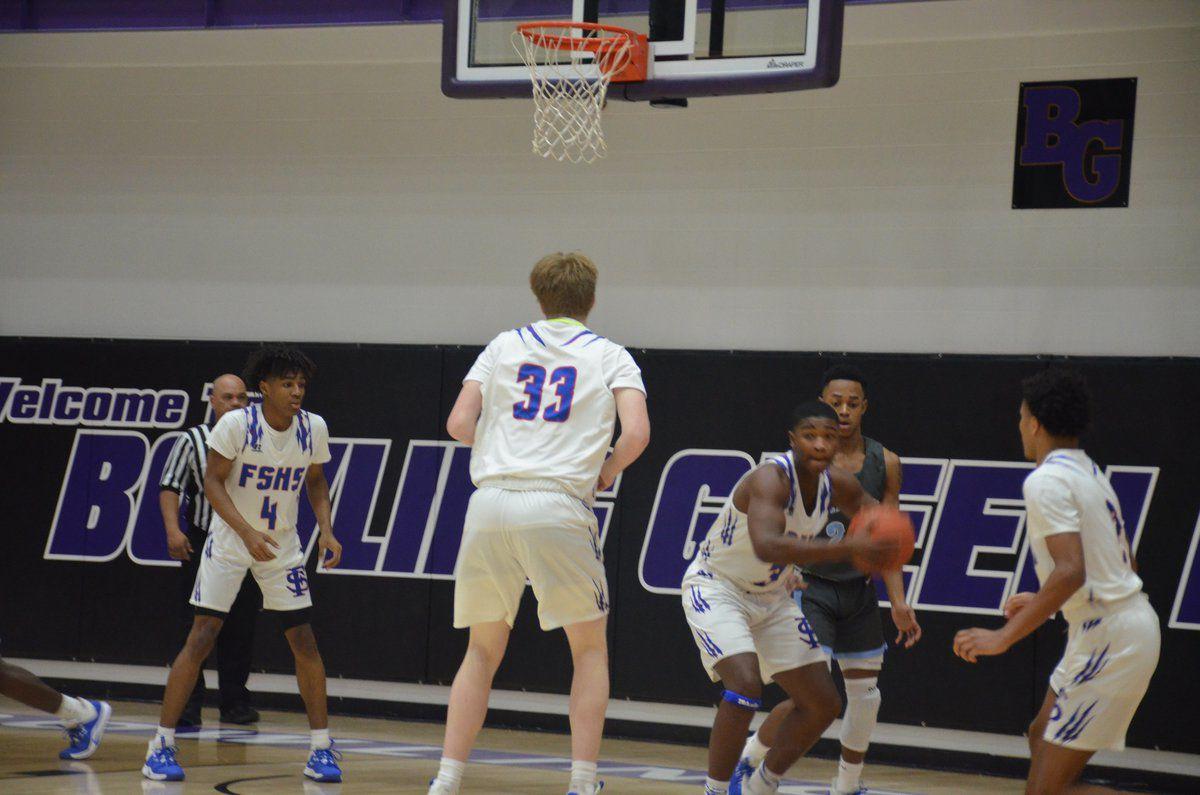 Wildcats' senior Demarco Chatman (with ball) secures the rebound and looks to dribble with senior Logan Lacouture (33) setting a screen or pass to junior Andreyous Miller (right) during their game against the Glasgow Scotties last Saturday afternoon.

Wildcats' senior Demarco Chatman (with ball) secures the rebound and looks to dribble with senior Logan Lacouture (33) setting a screen or pass to junior Andreyous Miller (right) during their game against the Glasgow Scotties last Saturday afternoon.

In their three games, they faced one of the most successful Tennessee 5th Region 3-A basketball teams (Station Camp) and 3rd (Owensboro) and 4th Region (Glasgow) title contenders.

"I thought my guys played hard against great competition," Wildcats head coach Dee Spencer said. "I felt like that we got better together. Things didn't go as we wanted as far as wins but overall, we got better as a team and that is the main thing. Everybody had to contribute. When you play three games in three days, everybody had to step up. We didn't have Tedric (Partinger) for two of those games so the young guys stepped in and did their job. We're going to take a couple of day off to get our bodies and minds right to prepare for Russellville on Friday."

Back to back 3-pointers by sophomores Ashton Cerwinske and Jackson Poland gave Glasgow an 18-14 lead. Chatman and senior Dawson Knight each made 3-pointers but seniors Nick Sorrell scored four points Bowen Haney added a 3-pointer as the Scotties led 29-24 at halftime.

Senior Jaden Franklin's early basket in the 3rd Quarter gave Glasgow a seven-point lead, 31-24. He went on to score eight points but Franklin-Simpson responded. Junior Kyjuan Stutzman who was scoreless in the 1st half, scored seven points, Knight hit his second 3-pointer of the game and Chatman's basket tied the game at 40-40 heading into the 4th Quarter.

Senior Demarco Chatman led all scorers with a game high of 22 points with juniors Kyjuan Stutzman pouring in 20 points and Andreyous Miller adding 16 as the Wildcats prevailed over the Owensboro Red Devils in both teams' second game of the tournament.

Stutzman got going early as his 3-pointer led to scoring seven points along with Miller putting in four points for Franklin-Simpson. Owensboro got four points from sophomore Gavin Whimsett and three points each from seniors Jaiden Greathouse and Reis Dickinson as they l;ed 20-18 at the end of the first.

Red Evils' senior Tucker Hagan scored five points with four points each from Greathouse and freshman Kenyatta Carbon. But Chatman had a strong 2nd Quarter for the Wildcats ashe scored 10 points. Miller along with fellow junior Andrew Ogles each drained a 3-pointer that helped them to lead 40-36 at halftime.

Chatman scored six points to lead Franklin-Simpson. Senior Logan lacouture scored four points and Stutzman chipped in with a 3-pointer. Five Owensboro players scored four points each as they took a one-point lead 56-55 at the end of three.

Dickinson scored 10 points for the Red Devils but the Wildcats got eight points from Stutzman with five points from Miller. Chatman scored three points and with two free throws from senior Dawson Knight, Franklin-Simpson held on to defeat Owensboro 73-71.

Wildcats' senior Demarco Chatman scored a team high of 19 points with junior Andreyous Miller adding 14 as they lost a heartbreaker to the Station Camp Bison 47-45 in the opening round game of the Purples Holiday Classic.

Three lead changes occurred in the 1st Quarter as seniors Kavon Blankenship and Eli Thurston scored the first seven points for the Bison for an early 7-2 lead. The Wildcats rolled off eight straight points with a traditional three-point play from Chatman and a 3-pointer for Miller to take a 10-7 lead. Thurston's basket at the end of the quarter gave Station Camp a 13-12 lead at the end of the first.

Four more lead changes occurred in the 2nd Quarter as both teams' largest lead was three points. Chatman scored six points with junior Kyjuan Stutzman adding four. Blankenship also scored six points with senior Cameron Gorlach also adding four points. Blankenship scored the final basket of the half as the Bison led 26-24 at the end of the 1st Half.

Chatman and senior Logan Lacouture's baskets tied the game twice early in the 3td Quarter for Franklin-Simpson. But Station Camp extended their lead with Thurston's back to back 3-pointers for 10 points. E along with Blankenship scored all the points for the Bison as they led 40-33 at the end of three.

Gorlach's basket early in the 4th Quarter gave Station Camp a 42-33 lead. Franklin-Simpson rallied as back to back 3-pointers from senior Dawson Knight and Miller cut their deficit down to two, 45-43. Later, Chatman's basket tied the game at 45-45. The Wildcats' defense forced a turnover with 1:22 left. They held it for a final shot but had a good shot in the paint that rattled in and out of the basket. The Bison got the final shot of the game as with their missed shot, Blankenship's offensive rebound and put back at the buzzer gave them a 47-45 victory.