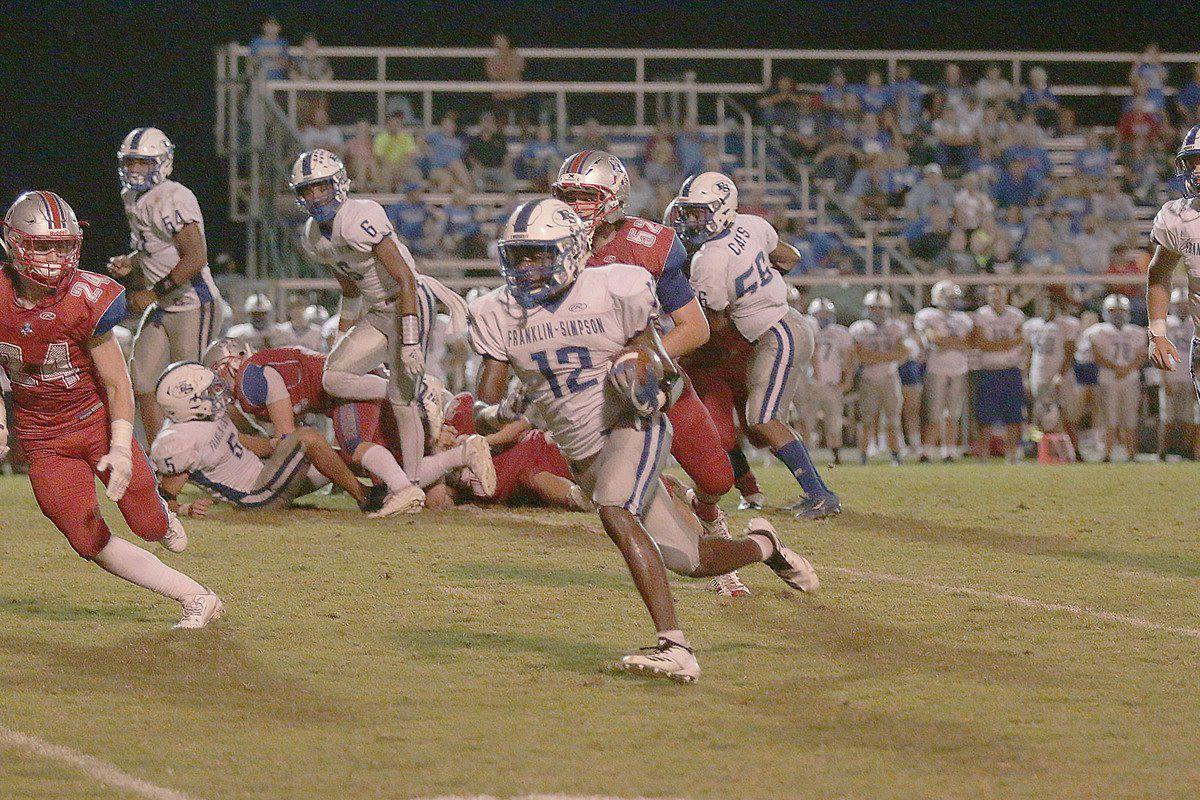 Wildcats' senior Tedric Partinger runs around the left side of the line deep in patriots' territory during the 3rd Quarter of Friday night's district game at Allen County-Scottsville. 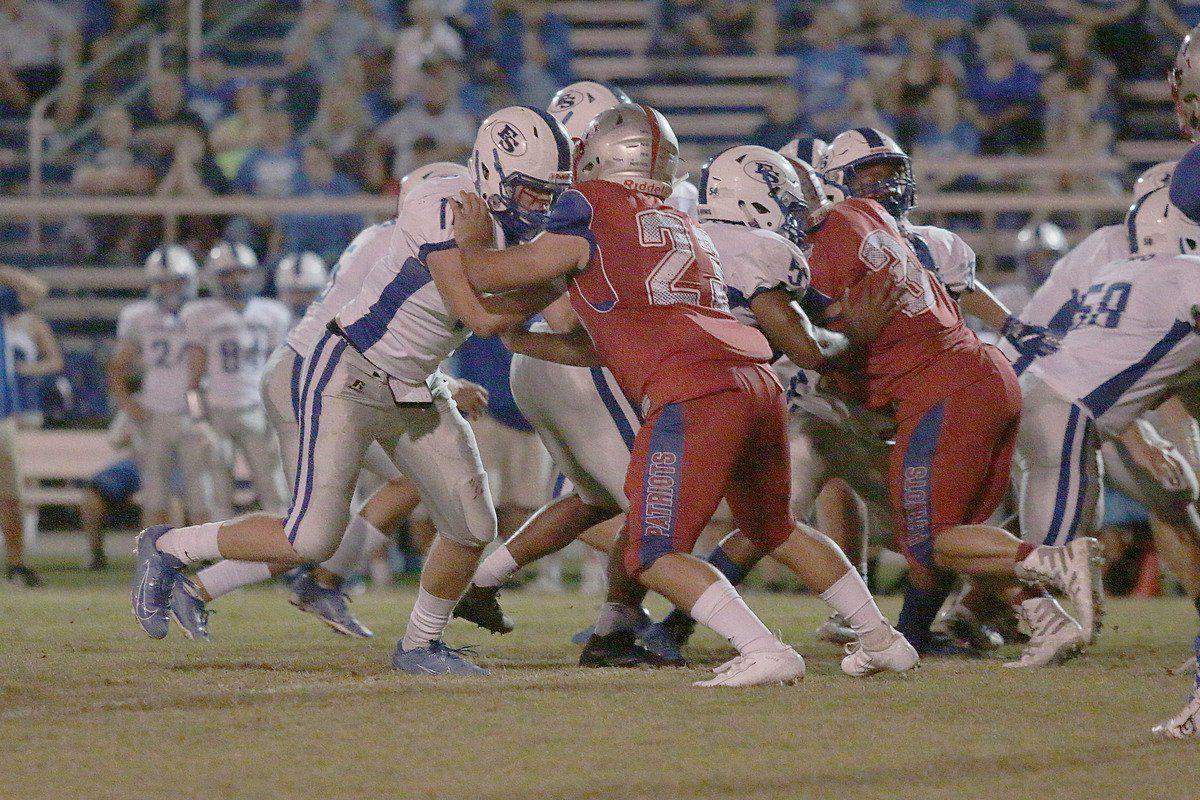 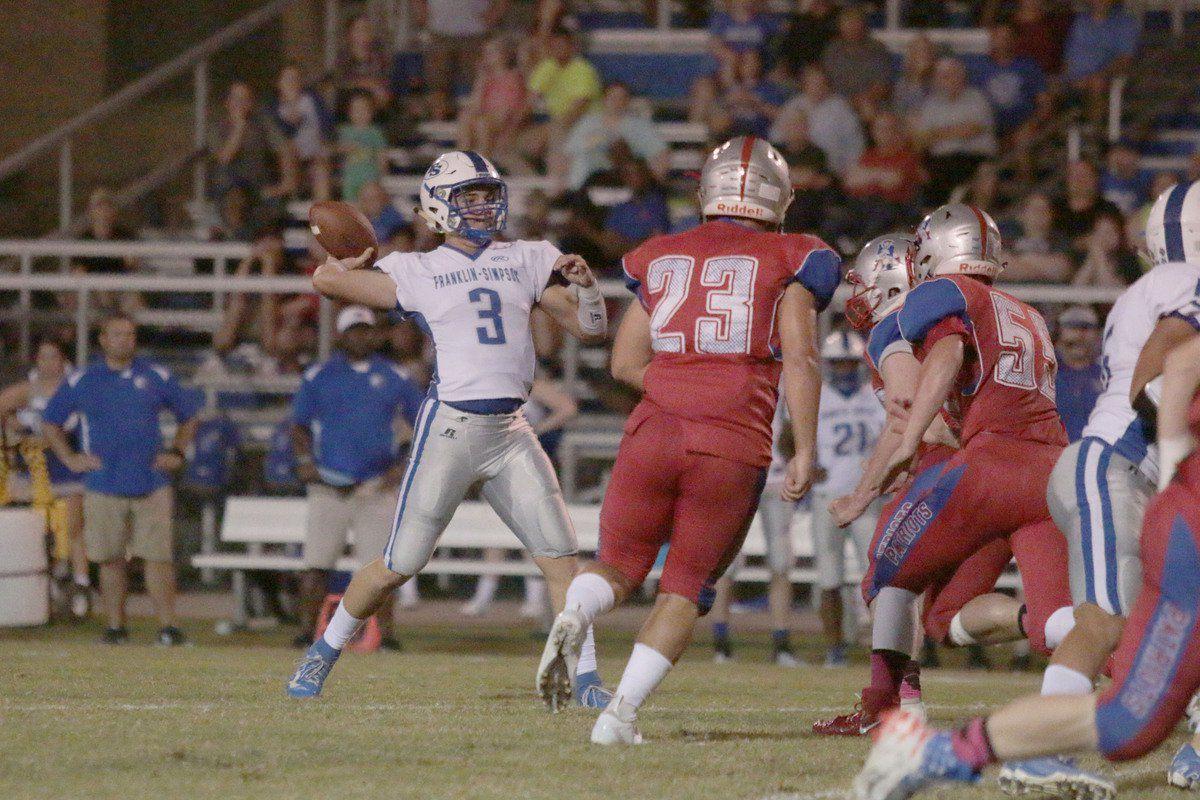 Wildcats' sophomore Luke Richardson looks to complete a pass during the 1st Half of Friday night's district game against Allen County-Scottsville.

Wildcats' senior Tedric Partinger runs around the left side of the line deep in patriots' territory during the 3rd Quarter of Friday night's district game at Allen County-Scottsville.

Wildcats' sophomore Luke Richardson looks to complete a pass during the 1st Half of Friday night's district game against Allen County-Scottsville.

The Franklin-Simpson Wildcats passed their first district test of the season with a huge 31-21 victory at Allen County-Scottsville.

The Wildcats are 1-0 in district play as the Patriots fall to 1-1 in the district.

"I thought we outfought them in the 4th quarter and had more left in that quarter to finish off the game," Wildcats head coach Doug Preston said. "It was a great atmosphere for a great game, kind of like their Super Bowl to them and that's ok. You have to step up and meet that challenge and the kids stepped up and did that better than earlier in the season."

The Wildcats built a 17-0 lead on their first three offensive possessions. Their first possession, following an 18-yard pass completion from sophomore Luke Richardson to senior Leandre Stutzman on 4th Down, senior Tedric Partinger ran for a 6-yard touchdown.

"I saw the defense they were in so on the first drive, I knew I would touch the ball some," Tedric Partinger said. "I just knew that I could take it up the middle and score."

After the Wildcats' defense stopped the Patriots on 4th Down, Franklin-Simpson's offense was on the move again. On the very next play after Richardson's 27-yards pass and run to Partinger, sophomore Omar Harrison broke through the line and ran for a 60-yard touchdown.

"That was a run, one I won't forge but I couldn't have had that run without my blockers," Omar Harrison said. "I saw an opening and I took it and everyone saw where it led. Great to have my first touchdown scored in varsity against Allen County-Scottsville."

Partinger got a key interception off of Patriots' junior quarterback Trace McIntyre. With good field position, the Wildcats couldn't get the touchdown but got a 45-yard field goal from Cole Hollingsworth, the longest of his career. The field goal and his two extra points gave the Wildcats a 17-0 lead.

The Wildcats committed a turnover on their next possession that gave the Patriots a boost right before the end of the 1st half. With a key penalty by Franklin-Simpson, Allen County-Scottsville ran the ball down the field for their first touchdown of the game. Senior Jacquez Mcpeak ran for an 11-yard touchdown and with sophomore Thomas Walker's extra point, the Patriots trailed 17-7 at halftime.

Allen County-Scottsville carries that momentum over to start the 2nd half as McIntyre opened the half with a 64- yard run. Three plays later, junior Dillon Rookstool barreled his way through the defense for a 16-yard touchdown run. The extra point by Walker put their deficit down to three, 17-14.

Later in the quarter, the Wildcats' special teams forced a shanked punt by the Patriots, giving them excellent field position. On 3rd and goal, Richardson threw a 14-yard touchdown pass to a wide-open junior tight end Andrew Ogles for his first touchdown catch of the season. Hollingsworth's extra point put Franklin-Simpson back up by two scores, 24-14.

"I don't hardly get any passes thrown my way and we got in a formation where they were worried about Leandre (Stutzman) so I was just naked out there. This was probably the easiest catch I've ever had in my life," Andrew Ogles said. "I couldn't do what I done tonight without Coach Chaney and Coach Satterly. They are always encouraging me as Coach Chaney drew up a beautiful play and Coach Satterly is always on me to get better every week and tonight it paid off."

"I know teams that scout us knows that Leandre (Stutzman) is our top receiver and you can see their coaches to slide over to cover him. Luke (Richardson) is pretty smart and he saw the safety slide over and he knew even before the ball was snapped that Andrew (ogles) would be wide open and he was and hit him in stride," Preston said. "It was a good throw, easy ball to catch and hit him in stride and a big play in the game."

Allen County-Scottsville would not back down as they used a trick play, a 39-yard pass from junior Brandon Baxter to junior Jax Cooper, that put them deep in Wildcats' territory. On the very next play, junior Landon Witcher ran for a 15-yard touchdown and with Walker's extra point, the Patriots once again trailed by three points, 24-21.

When they needed to score, the Wildcats showed the heart of a champion in the half as senior Chase Gooch and the offensive line closed the show. He ran four times on the ensuing possession for 52 yards with a 26-yard touchdown run that delivered the knockout of the game as with Hollingsworth's extra point, Franklin-Simpson got their first district win of the season with a 31-21 victory over Allen County-Scottsville.

"It was an emotional game for us. Coaches said it would be a hard fought football game tonight and we fought our butts off tonight," Chase Gooch said. "Coach gave me the ball a lot on the last drive and said to get it in the end zone and I did. I was just full of emotion and hype on that score because I knew we took it right out of them on that score and I just let my emotions go with that one."

Preston credits his kids but also the early tough non-district schedule for the victory.

"The coaches and I was talking and we mentioned that this game was the kind of game we lost in the first two weeks of the season," Preston said. "Just a tough football game that can go either way. But last night, you can see the experience from those first two games show up and our guys turned it up a couple of notches and played even harder in the 4th Quarter."

Luke Richardson completed three of his five passes for 59 yards for a touchdown. Ogles, Partinger and Stutzman each had a key reception.

McIntyre and Brandon Baxter combined to complete nine of their 16 passes for 86 yards with an interception. Jax Cooper had two receptions for 45 yards and senior Zane Ward had four receptions for 22 yards.