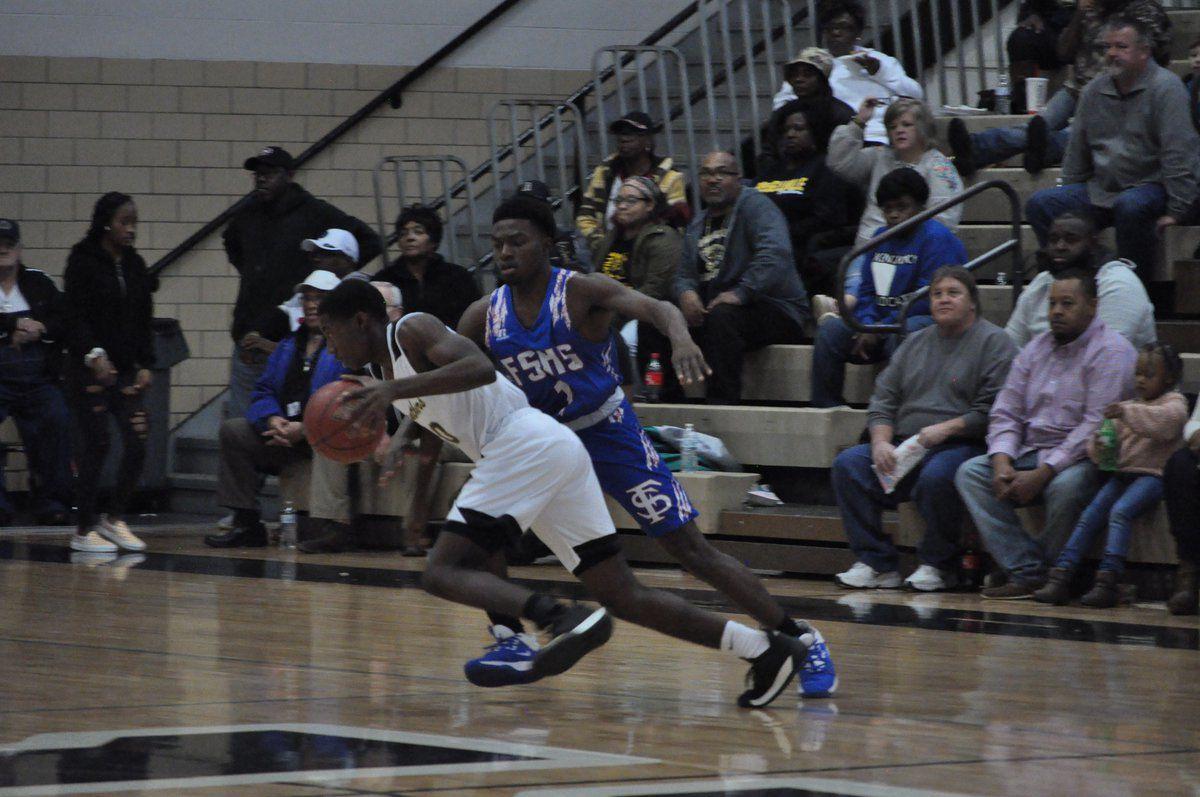 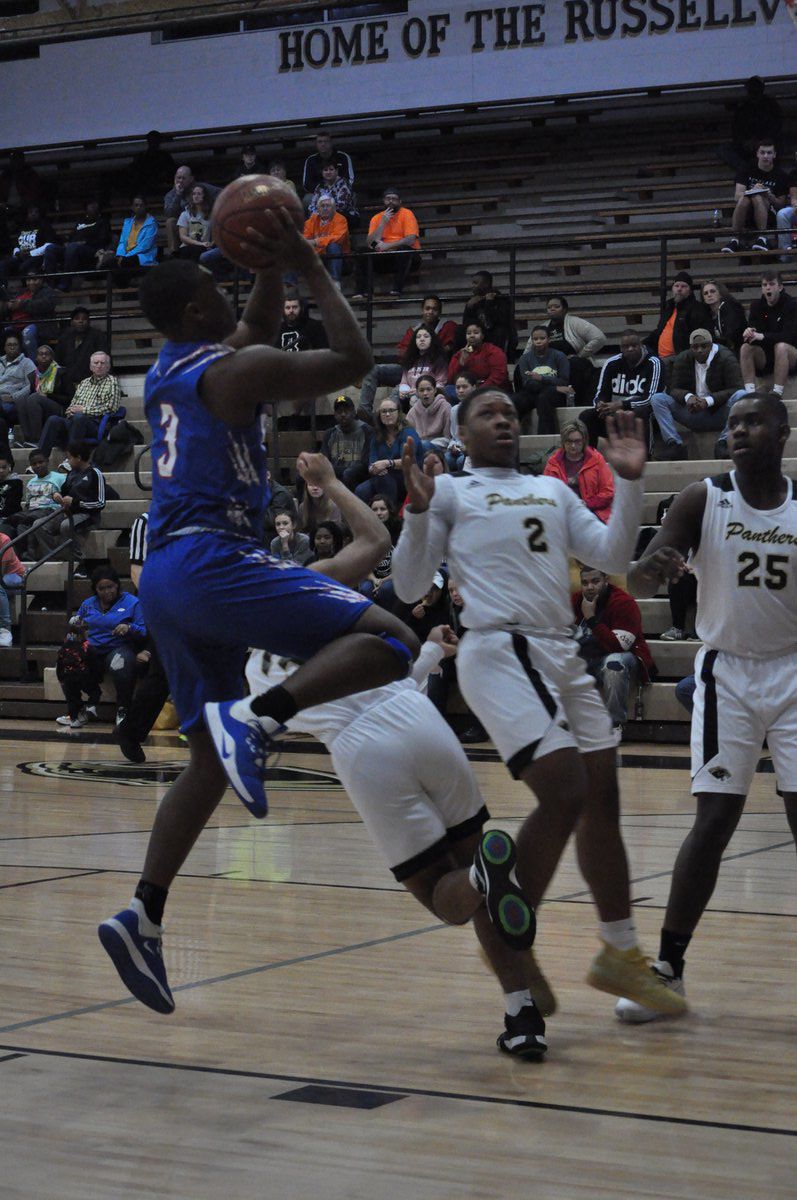 Wildcats' senior Demarco Chatman (3) takes a shot over Panthers' freshman Andrew Dowlen during the 1st Half of their 13th District game last Friday night against Russellville.

Wildcats' senior Demarco Chatman (3) takes a shot over Panthers' freshman Andrew Dowlen during the 1st Half of their 13th District game last Friday night against Russellville.

The Franklin-Simpson Wildcats earned their first 13th District win of the season as they sped the game up and ran away from the Russellville Panthers for a 75-44 victory.

"We normally don't play fast offensively but they wanted to press us so we just played in attack mode," Wildcats head coach Dee Spencer said. "Proud of my guys. They came out and did what they had to do. They played pretty well and came out with a district win."

The Wildcats are 1-1 in 13th district play as the Panthers suffered their first loss in their first district game of the season.

Russellville pressed Franklin-Simpson as they took what they gave them and sped the game up to a fast pace. As they jumped out quickly to a 20-4 lead with seven points from junior Kyjuan Stutzman and five from senior Demarco Chatman and a 3-pointer from junior Andreyous Miller. They also got baskets from seniors Logan Lacouture, Tedric Partinger and freshman Demarcus Hogan for a 24-11 lead at the end of one.

The 2nd Quarter had signature moments as the Wildcats' defense sped up the game even more as they were able to increase their lead. One of the signature moments was Lacouture's 3-pointer that excited the team and the crowd for a 39-19 lead. He led the team with seven points in the quarter.

"I like to think that I have a pretty good shot and it's pretty consistent," Logan Lacouture said. "I'd like to shoot and make more threes, that one, I should have missed but I got lucky. I did the best that I could on both sides of the ball."

Junior Isaac Marshall added a basket late in the quarter as the other signature moment came from Chatman as his emphatic two handed slam dunk off a missed shot by Miller at the end of the 1st Half fired up the team and the crowd again as Franklin-Simpson led 47-21 at halftime.

"The clock was running down and I knew that Andreyous (Miller) was going in for the layup. I thought that he may miss the shot and so my thought was why not to go up and get it and slam it in and I did," Demarco Chatman said.

"Demarco (Chatman) did what he is supposed to do," Spencer said. "He is our leader and put a stamp on the game with the dunk at the end of the half."

A 12-2 run by the Wildcats early in the 3rd Quarter put the game away for good as their lead grew to 59-23. Chatman scored six points with Stutzman adding three points. Hogan knocked down a 3-pointer with a basket from Lacouture that put his point total in double figures. Free throws from freshman Jalen Briscoe and Partinger gave Franklin-Simpson a 63-30 lead at the end of the third.

The reserves came in the 4th Quarter and put an exclamation point on one of the best full games played by the Wildcats this season. Freshman Connor Vincent led the team with six points with junior Andrew Ogles scoring four points and with a pair of free throws by Ben Banton, Franklin-Simpson ran away from Russellville with a 75-44 victory for their first 13th District

victory of the season.

"It feels good when we get to sit on the bench and cheer on the players that don't get to play that much," Chatman said. "When they score, we get to celebrate and we are the cheerleaders."

Chatman led all scorers with a game high of 18 points with Stutzman adding 14 points and Lacouture with his career high of 11 points for Franklin-Simpson.

"It's a process with Logan (Lacouture)," Spencer said. "Good game from him and he's getting better as the season goes on and so is everybody else."

Josh Allen led Russellville with 13 points, as he was the only player that scored in double figures.

The Wildcats are back in action again next Friday night as part of a girls/boys 13th District doubleheader at Todd County Central. The boys' game will follow 20 minutes after the conclusion of the girls' game and 1220 WFKN Franklin radio will broadcast the doubleheader games beginning at 5:45 p.m. and on the internet at www.franklinfavorite.com and click on the WFKN tab in the blue toolbar. Click on the WFKN sports tab and press the play button.