$34.00 for 365 days
Get Started
You have permission to edit this article.
Edit
Home
News
Opinion
Sports
Records
Features
Obituaries
Classifieds
WFKN
1 of 2 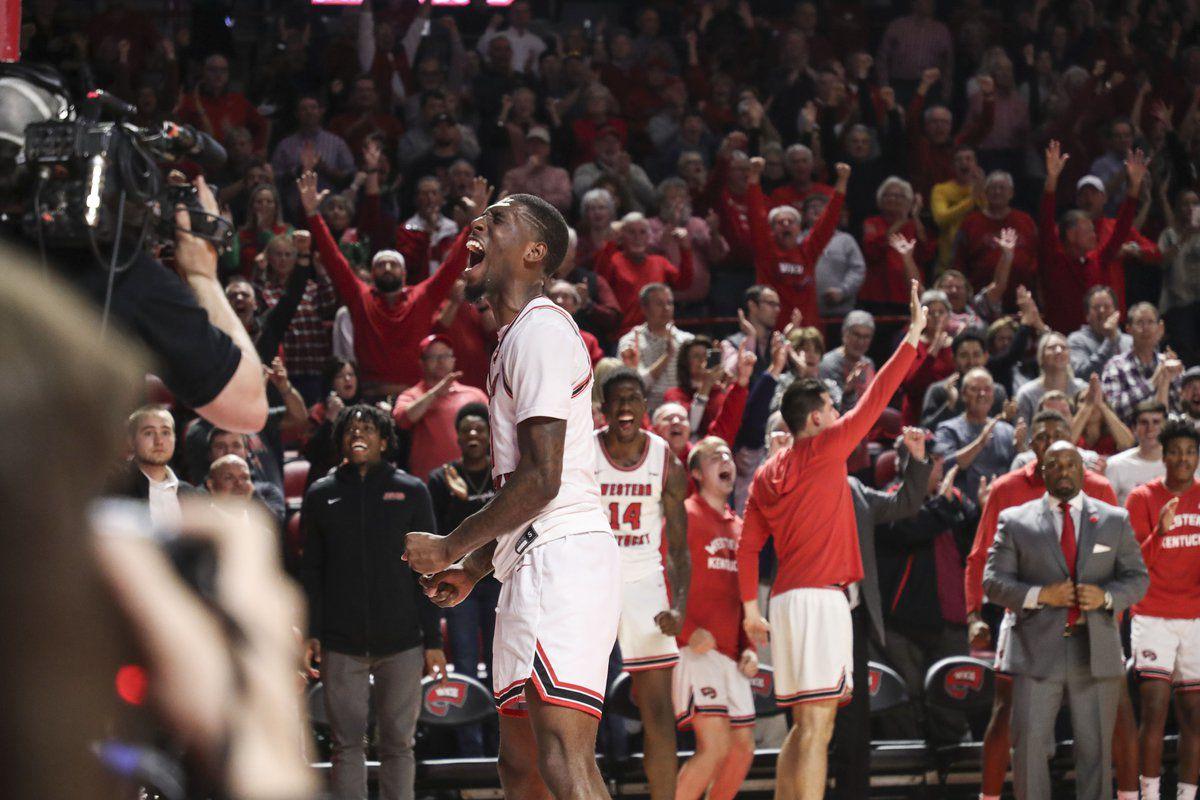 Hilltoppers' junior Taveion Hollingsworth celebrates after his layup in overtime sealed their victory over the Arkansas Razorbacks in Saturday night's game at E.A. Diddle Arena. 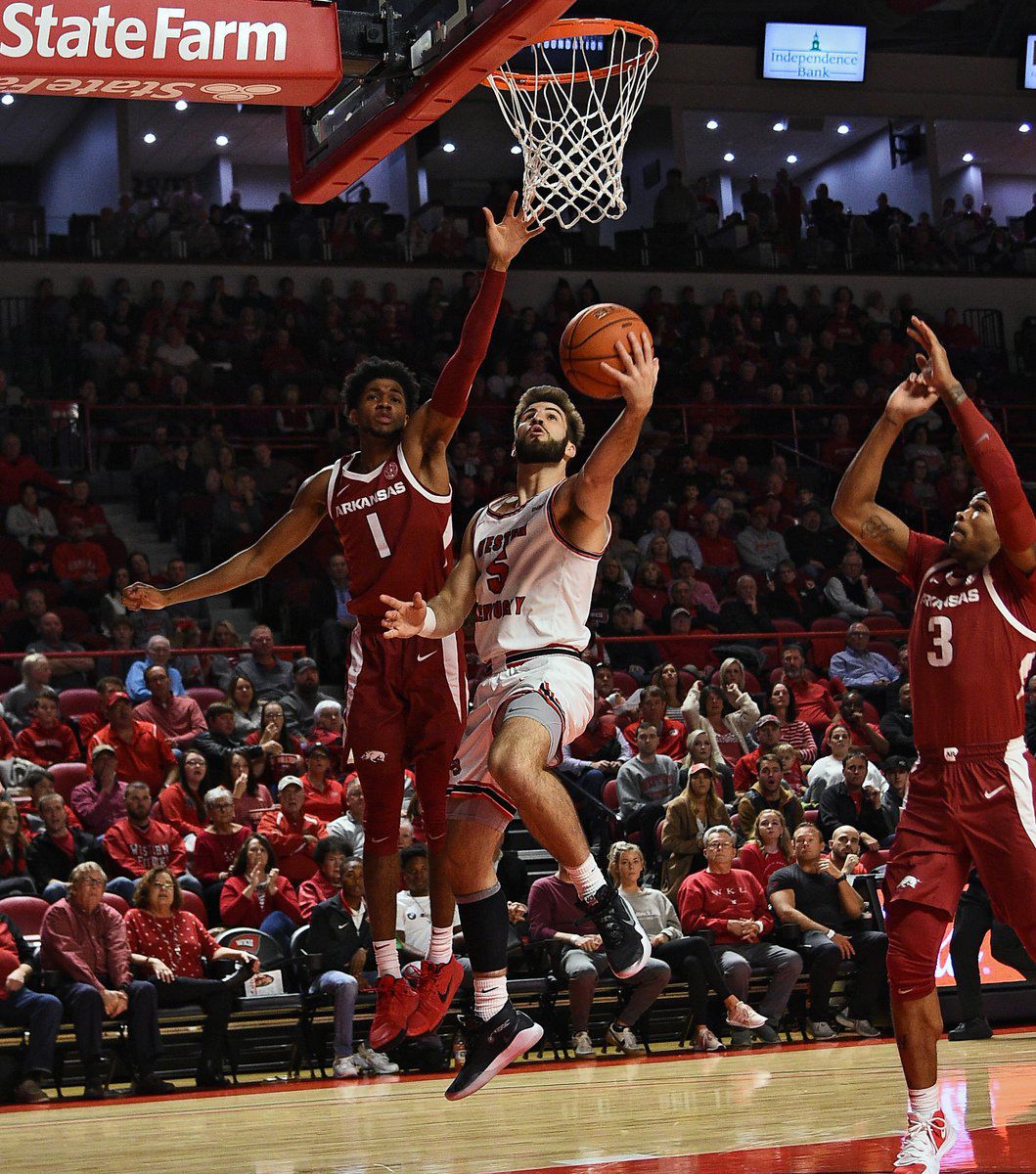 Hilltoppers' junior Taveion Hollingsworth celebrates after his layup in overtime sealed their victory over the Arkansas Razorbacks in Saturday night's game at E.A. Diddle Arena.

The Western Kentucky University Hilltoppers' basketball team picked up a big win over the Arkansas Razorbacks, from the Southeastern Conference, 86-79, in overtime in front of nearly 6,900 fans at E.A. Diddle Arena.

With the win, the Hilltoppers improve to 7-2 while the Razorbacks suffered their first loss of the season as they fall to 8-1. The victory improves Western Kentucky to 8-4 against Power Five opponents since the start of the 2017-18 season and improves to 4-1 in overtime games under Rick Stansbury, with each of those victories coming by at least seven points in the extra period.

"I'm awful proud of our guys," Hilltoppers head coach Rick Stansbury said. "I thought we showed a lot of grit and a lot of toughness. We were down late in that game after we'd lost Charles (Bassey). You could very easily let some emotion leave your body but we didn't do it. I thought our guys took their emotion to another level."

Five lead changes occurred in the 1st Half with Arkansas leading by as much as four early on as Western Kentucky led by as much as six. Graduate senior Jimmy Whitt Jr. led the Razorbacks with 12 points. Senior Josh Anderson and graduate student Camron Justice led the Hilltoppers with seven points each with sophomore Charles Bassey adding six as they led 33-28 at halftime.

In the 2nd Half, both teams exchanged leads as each team went on different runs that saw six ties with four lead changes. With 3:40 left in the game, tied 62-62, Bassey went down with an apparent knee injury. A CT scan, X-ray and MRI revealed a tibial plateau fracture that will require season-ending surgery.

Bassey underwent surgery on Tuesday in Houston, TX with the team physicians for the NFL's Houston Texans and NBA's Houston Rockets. These are the same physicians who performed surgery on Texans star J.J. Watt when he suffered a similar injury in 2017. His rehab process will start immediately after surgery with an anticipated recovery time of six to nine months.

From there, Arkansas built a six-point lead with 1:03 remaining. Western Kentucky worked their deficit down by forcing Arkansas to miss free throws and them converting their on the other end. Justice drew an offensive foul that gave them a chance to tie the game. With 31 seconds left, redshirt senior Jared Savage made a 3-pointer from the corner to tie the game at 73-73. Arkansas' 3-pointer was missed as time expired, sending the game into overtime.

"Shout out to Coach and all my teammates for trusting in me," Jared Savage said. "They drew up a play for me, and I just shot it. That's what I work for all the time. I'm in the gym all the time shooting shots like that. Everyone wants to hit the game-tying shot, so it was nice."

Anderson scored the first five points in overtime for the Hilltoppers and junior Taveion Hollingsworth's steal and layup gave them an 80-77 lead. The Razorbacks would make one of two free throws on two different occasions. Savage and redshirt junior Carson Williams made all four of their free throw attempts and Hollingsworth got another steal and dunk to finish the game off as Western Kentucky picked up another win over a Power Five conference team, 86-79 overtime victory over Arkansas.

"When I got in the game, I was just playing my role," Josh Anderson said. "Come in, bring energy to the team, trying to play great defense. I thought I got to the rims a lot better than I've been doing, and just play hard. That's me. That's what I do."

"The crowd was cracking," Taveion Hollingsworth said. "It was super loud. You really couldn't hear yourself think. They were a really big part of how we came back in that game. Hearing that and them showing a lot of love, for them to come out and support us tonight, it meant a lot."