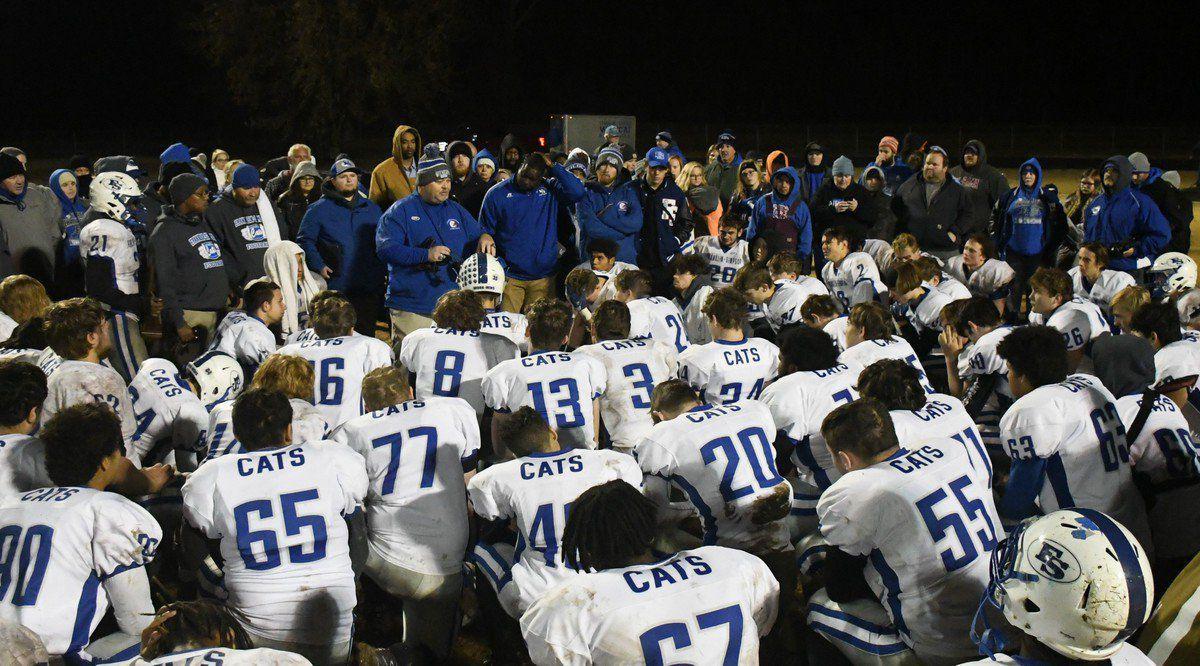 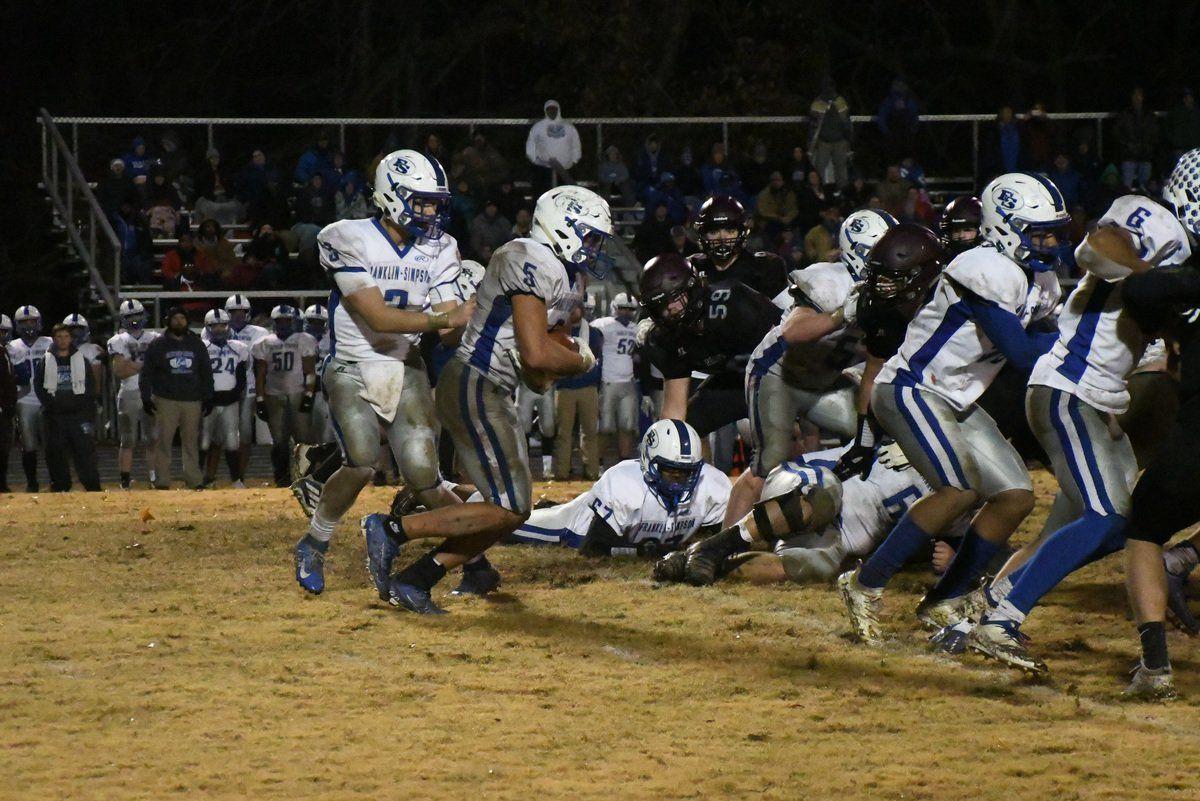 Wildcats' senior Chase Gooch (5) takes the hand off to run up the middle from sophomore Luke Richardson (3) in last Friday night's region championship game against the Maroons. 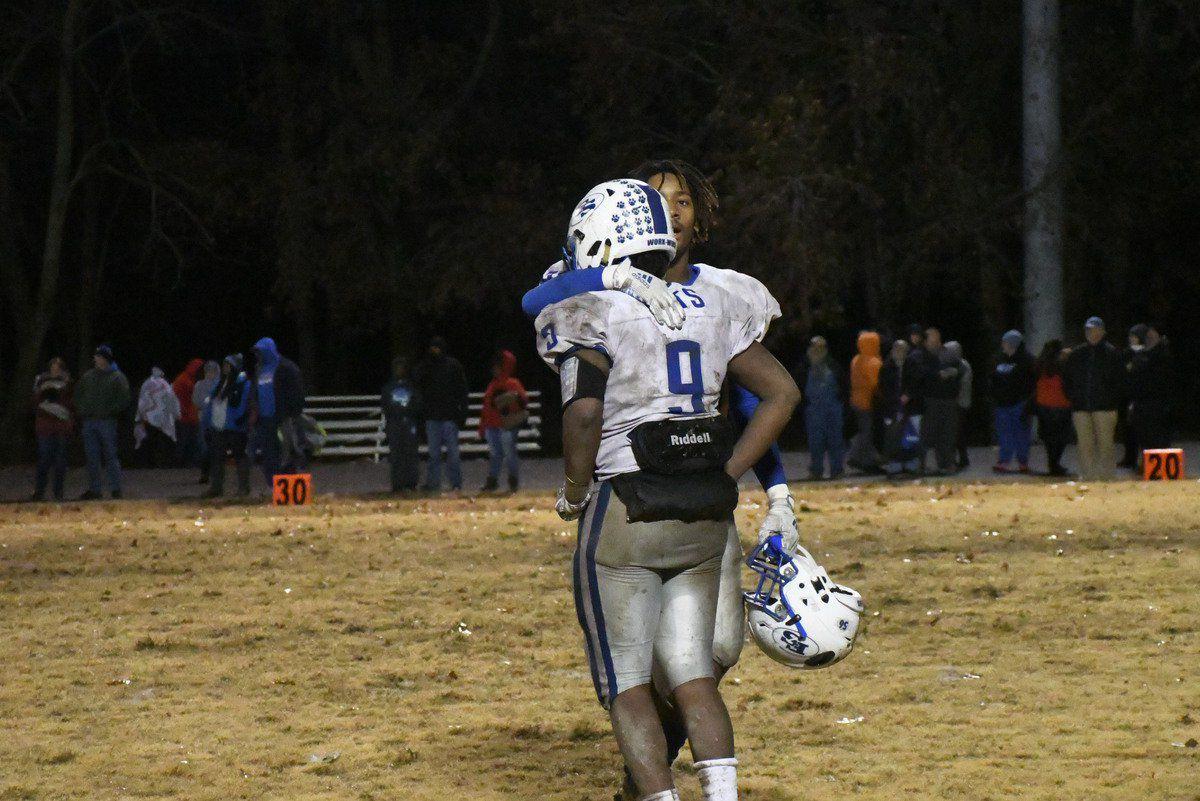 Wildcats' junior Malik Carter (9) is hugged by one of his teammates at the end of the region championship game last Friday night at Madisonville. 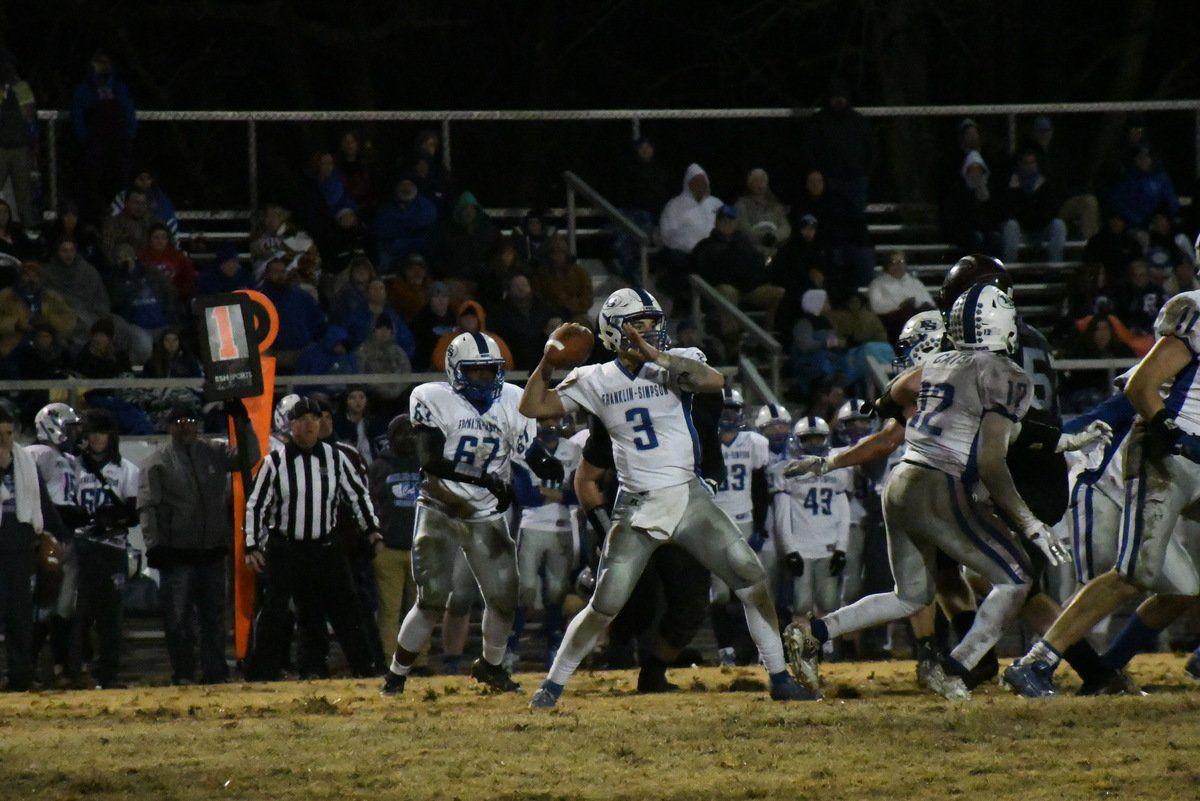 Wildcats' senior Chase Gooch (5) takes the hand off to run up the middle from sophomore Luke Richardson (3) in last Friday night's region championship game against the Maroons.

Wildcats' junior Malik Carter (9) is hugged by one of his teammates at the end of the region championship game last Friday night at Madisonville.

The Wildcats' 12-game playoff win streak and their quest for a fourth straight trip to the state championship game came to an end.

"The kids should be proud of the four-year run," Wildcats head coach Doug Preston said. "When they get older and have kids and look back -- and the tradition here is tremendous -- they can say that we had the greatest run ever or at least one of the greatest runs in F-S history. I'm really proud of them."

"Being called regional champions sounds great to me," Maroons head coach Jay Burgett said. "We've played Franklin-Simpson last year in this same game and lost to them. They put us out two years in a row. Coach Preston does a great job with them, but our kids just refuse to lose. Their composure, their fight, their grit helped us secure this win tonight. It's our first regional championship since 1971. It was a long time coming and it is well deserved for this senior class and group of athletes."

The first half better resembled two heavyweight boxers throwing haymakers, trying to deliver the knockout. Both teams did what they do best, run the football.

In the first quarter, Madisonville-North Hopkins' senior Jeriah Hightower got going early, as he scored the first touchdown of the game with a seven-yard run. Franklin-Simpson answered back as following a 35-yard run by senior Leandre Stutzman on a third-down play, senior Tedric Partinger also ran for a seven -yard touchdown. Junior Cole Hollingsworth and senior Simon Lind provided the extra points, tying the game at 7-7 at the end of the 1st Quarter.

Both teams combined for 30 points in the second quarter. Hightower ran for his second touchdown with a one yard run and with Lind's extra point, the

Sophomore Omar Harrison's 32-yard run helped set up Partinger's second touchdown of the game with a 14-yard run. On their next drive, they drove right down the field as sophomore Luke Richaqrdson's 25- yard pass to Stutzman set up his 2-yard quarterback sneak for a touchdown. Hollingsworth kicked both extra points as the Wildcats took the lead 21-14.

Madisonville-North Hopkins took their ensuing possession right down the field as Hightower dominated the drive by running for 74 yards on eight carries as his one yard touchdown run made the score 21-20 as the extra point was missed.

With a short field to work with, Franklin-Simpson was able to get themselves in field goal range and Hollingsworth kicked a 35-yard field goal as time expired in the half for a 24-20 lead at halftime.

The Wildcats outgained the Maroons 247-212 in total yards of offense as Partinger had 84 yards on six carries for a touchdown and Stutzman had 57 yards on five carries. Hightower had 20 carries for 164 yards for three touchdowns.

In the 2nd Half, Madisonville-North Hopkins dominated on both sides of the football and was able to deliver the knockout to Franklin-Simpson.

The Maroons took the lead for good in the 3rd Quarter as an inadvertent whistle cost the Wildcats. The whistle moved the play from a 3rd Down and 14 on the Wildcats' 38-yard line back to a 2nd Down and 1 from the 25-yard line. On the re-do, Hightower ran for a 25-yard touchdown, his fourth of the game. Lind's extra point gave them a 27-24 lead.

"That was a big play," Preston said. "Getting a stop was big for both teams. That's why we went for it on 4th Down a couple of times. It was one of those nights where we had to keep the ball or we're not going to get down there. Just the way it goes sometimes."

On the second play of their next offensive possession, senior Hayden Reynolds threw a screen pass to senior Marquise Parker who eluded a couple of tackles and ran 70 yards for a touchdown. The extra point was missed as Madisonville-North Hopkins stretched their lead to 33-24.

The Maroons' defense forced a turnover that gave their offense good field position. Their drive carried over into the 4th Quarter as Hightower scored his fifth touchdown of the game with a six yard run. The two-point conversion attempt failed as they led by two scores, 39-24.

Madisonville-North Hopkins' defense forced a turnover on downs as their offense took over with a short field to work with. On the drive, Hightower carried the ball on four out of the six plays and ran for a 2-yard touchdown for his sixth touchdown of the game. The extra point was missed as they led 45-21.

Franklin-Simpson scored a touchdown on their last drive of the game as Richardson threw a 27-yard touchdown pass to Stutzman. Hollingsworth's extra point made the score 45-31.

The Wildcats tried an onside kick but was unsuccessful as the three year reign as region and two year reign as state champs came to an end as Madisonville-North Hopkins dethroned Franklin-Simpson 45-31.

"We made the adjustment of getting a little more beefy on the edges," Burgett said. "They were hurting us on the edge and we got some bigger backs on the edge as we took out some smaller guys. We also adjusted our alignment slightly so that they could play the middle on the jet sweeps. Where we were aligning people with our fronts and on the edges really helped us in the second half."

The Maroons outgained the Wildcats 490-370, Tedric Partinger had 113 yards on 11 carries for two touchdowns with Leandre Stutzman had nine carries for 73 yards and Chase Gooch had 11 carries for 64 yards.

Luke Richardson, who also had a rushing touchdown, completed two of his five passes for 52 yards for a touchdown with an interception. Stutzman was the recipient of both receptions with the receiving touchdown.

"Anytime that you have a great running back with a great game, that means the offensive line had a really good performance. They both go hand in hand and you got to give them credit," Preston said. "They got after us up front. We were playing pretty banged up and we ran out of players to sub in but they have a really good football team. Jeriah (Hightower) is a heck of a running back and Hayden (Reynolds) is a good quarterback. They have 20 seniors and we've been there at that point over the past three years. We don't have a big senior class right now but our kids played hard and ran out of gas tonight."

"Jeriah (Hightower) is a beast. He's our horse and the more carries you give him, the better he gets and we have said that for years. You just keep feeding the beast and soon as his motor is running, he keeps finding those holes," Burgett said. "Credit the offensive line for opening up holes for him and I feel like we've done something to Franklin-Simpson that we have never done before and that is that we wore him down. Physically, we were a little more dominant at the line of scrimmage because we don't have many two-way players."

Franklin-Simpson ends their season with an overall record of 7-6 as Madisonville-North Hopkins advances to the state semifinal round as they will go on the road to play the Johnson Central Golden Eagles on Friday night. The winner of that game will play the winner of the other state semifinal round game featuring the Boyle County Rebels hosting the Central Yellowjackets.