If you need to purchase a subscription.
You have permission to edit this article.
Edit
Home
News
Opinion
Sports
Records
Features
Obituaries
Classifieds
1 of 2 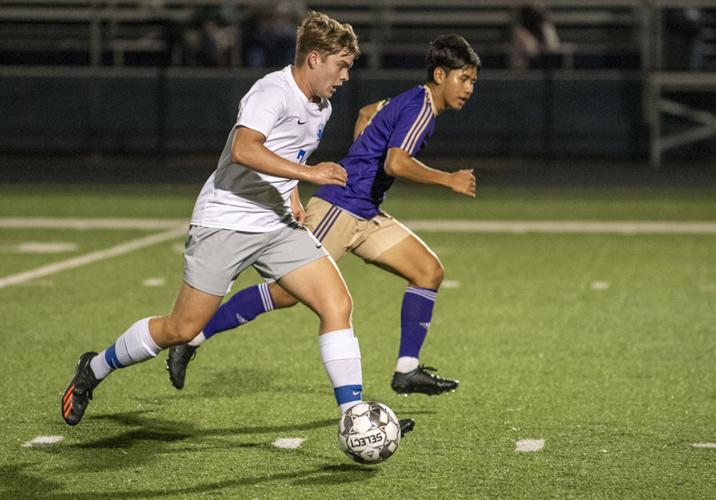 Franklin-Simpson sophomore Griff Banton dribbles downfield against Bowling Green. The Wildcats fell 4-0 to the Purples in the regional tournament at Warren Central. 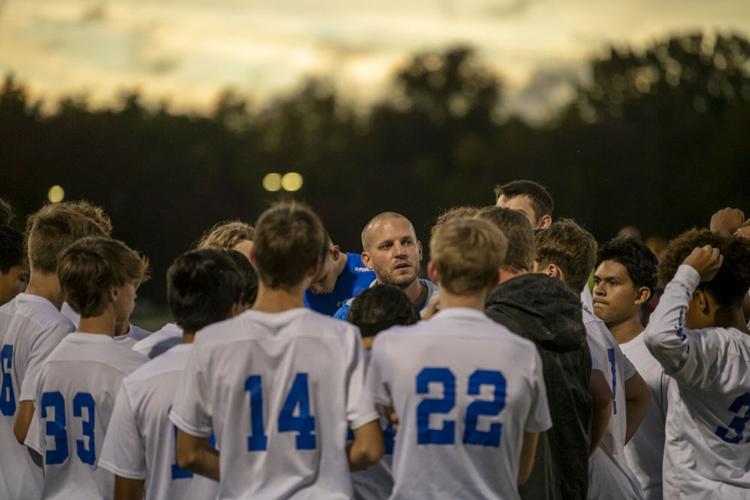 Franklin-Simpson coaches and players huddle up during play Oct. 12 in the regional soccer tournament at Warren Central.

Franklin-Simpson sophomore Griff Banton dribbles downfield against Bowling Green. The Wildcats fell 4-0 to the Purples in the regional tournament at Warren Central.

Franklin-Simpson coaches and players huddle up during play Oct. 12 in the regional soccer tournament at Warren Central.

The Franklin-Simpson Wildcats soccer team endured a couple of weather delays but could not endure the first half storm by the Bowling Green Purples, who scored three goals in the first half to defeat the Wildcats 4-0 on Oct. 12 in the semifinal round of the 4th Region Boys Soccer Tournament at Warren Central High School.

“Despite the outcome, I am proud of the guys,” Wildcats head coach Justin Dyer said. “We gave up four goals tonight, and we were down one of our best defensive players — and that is very upsetting — but I told the guys that this was one of the most fun seasons I ever had. It’s been a blast coaching these guys from the freshmen to the seniors. The season didn’t end like we wanted it to, but the way we played defense throughout the season, it will be a season I will never forget. The guys joked about my positivity, but I could be nothing more but positive with these guys. They were fun to coach and to be around.”

In the second half, Gonzaga deposited his second goal of the match as their defense made it difficult for the Wildcats to attack and get off any shots.

Connor Vincent saved 12 shots on goal for Franklin-Simpson. Bowling Green’s Braden Widener had a pair of assists with Shukurani Makiwa and Alex Salehe each had an assist.

The Wildcats finished their season 16-7-1, and their 11 wins against teams in the 4th Region is the most by any of the 14 teams in the region.

“We don’t want to have one or two good seasons, we want to build the program,” Dyer said. “My and Jocob’s (Dyer) goal is to not only develop the players we have but the ones for the future. With this senior class, they poured into the younger guys. They talked to them during practice, pushing them hard in practices and games with the right frame of mind to get them better and to grow the program.”

Franklin-Simpson’s seven seniors, John Adams, Andrew Hays, Gabe Jones, Joseph McClendon, Sam Mylor, Isaac Uhls and Connor Vincent all played a huge role on and off the field. They were one of the many reasons why the Wildcats had one of the most successful seasons in the program’s history.

“The seniors talked about the wins, getting that third distinct championship and seeing what they could do in the region tournament,” Dyer said. “The fact that is mind-blowing is that we led the state in shutouts with a very tough schedule. We joked around about having a top five defense and we did. We will have key positions and some big shoes with big roles to fill. The mindset is next man up. It’s an opportunity to step up and do something.”

Sam Mylor and Connor Vincent were selected to the 4th Region Boys Soccer All-Tournament Team at the conclusion of the match.