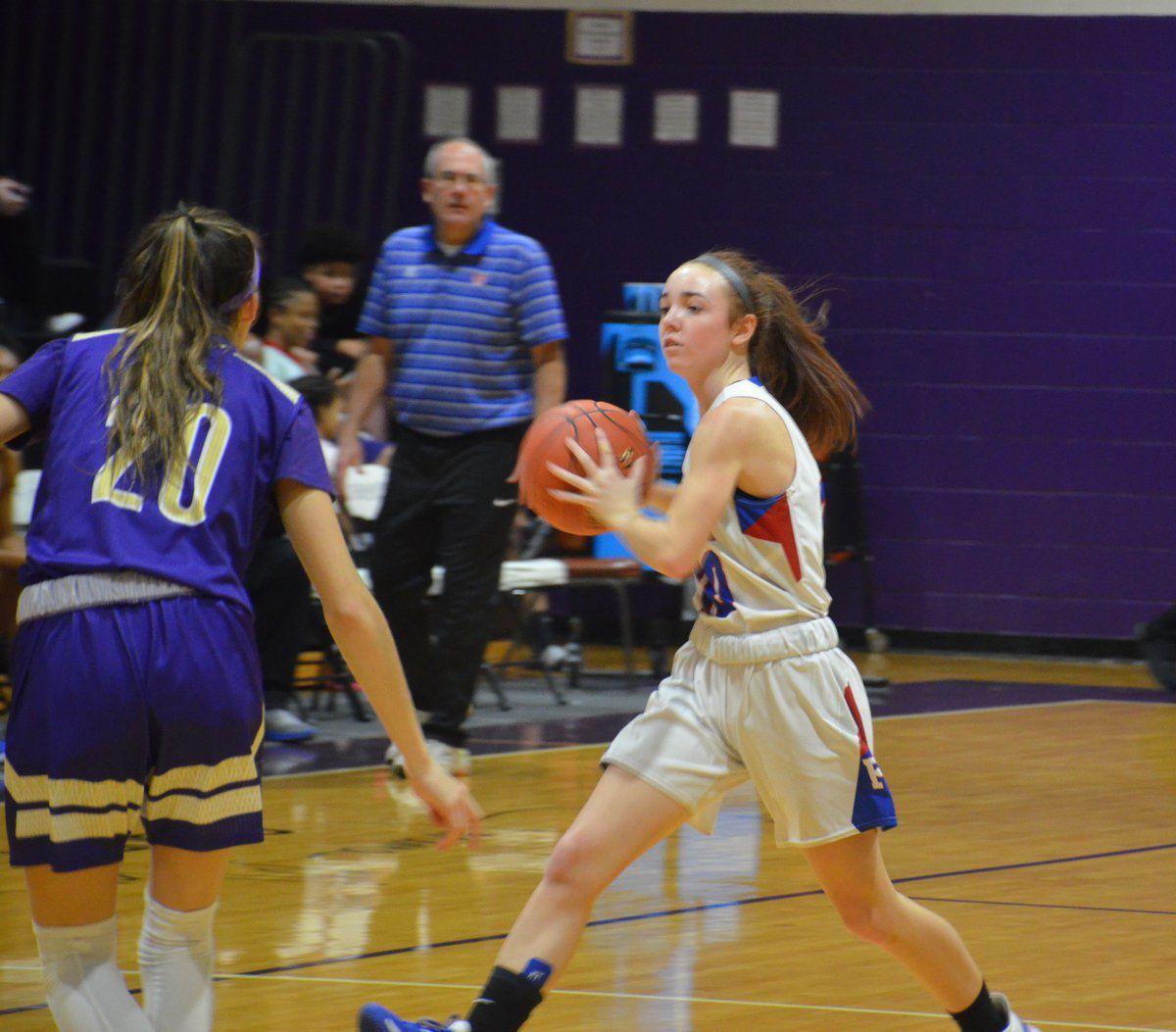 Lady Cats' freshman Conleigh Wilson (10) looks for an open teammate in the 1st Half of last Saturday's 3rd/4th place game against the Campbellsville Lady Eagles. 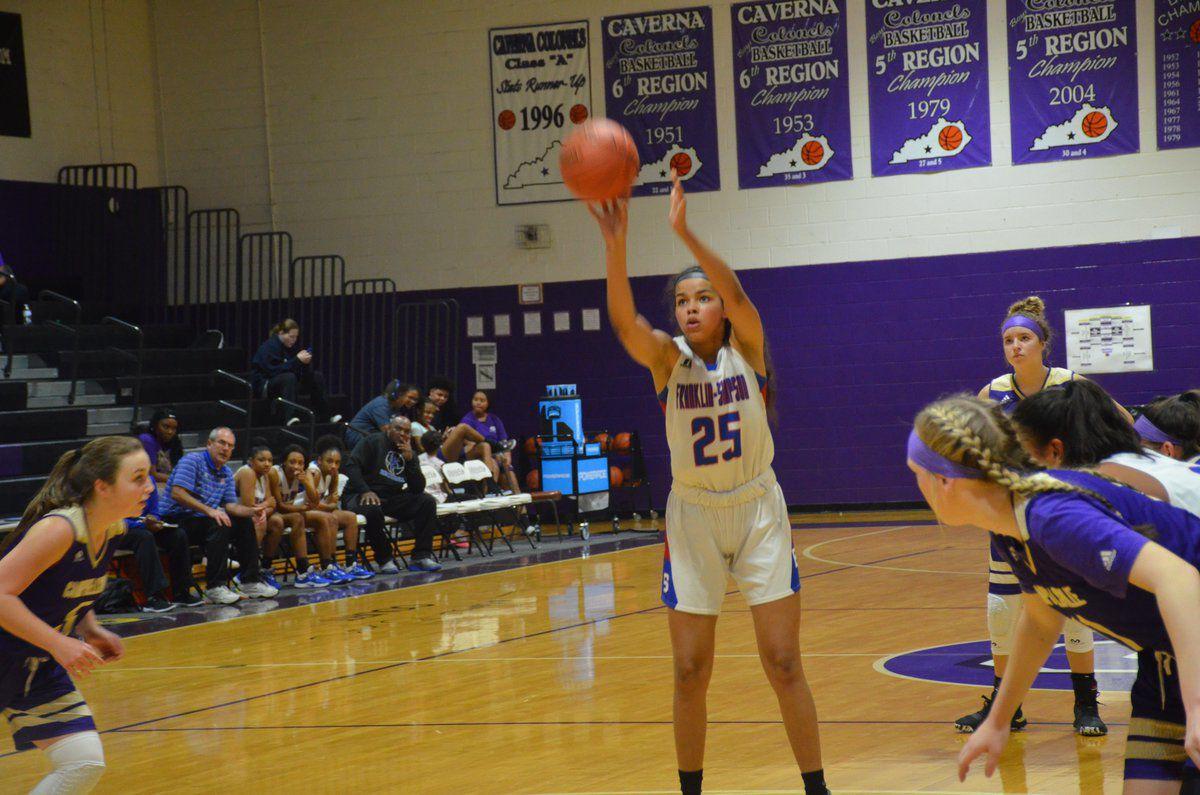 Lady Cats' freshman Conleigh Wilson (10) looks for an open teammate in the 1st Half of last Saturday's 3rd/4th place game against the Campbellsville Lady Eagles.

The Franklin-Simpson Lady Cats went into this week with players sick and unable to play, but with what they had, they were able to come away with a 4th place finish in the KYSports.TV Holiday Christmas Classic.

"I wish we didn't have the sickness bug going around throughout our locker room and I wish that the bumps and bruises that we have weren't there because we are not a physically strong team," Lady Cats head coach Lex Lindsey said. "We're not a physically big team and we need to have our wheels to be able to go. When you are sick, you can't run and you're hurting because you are all bruised up. I am proud of the girls this week. We played some goo d teams and with Campbellsville, I expect to see them win the All A 4th Region title. Some of the girls got some invaluable experience out there this week and that will expand our rotation now. We're 5-6, just a hair away from being .500 and this team at this point of the season hasn't been at that point in five years. We're going to rest and prepare for Russellville. They got us three times last year and we remember that. They got their key players back so it will be a tough one. We will have to play well to win."

Senior Evyn McCutchen led the Lady Cats with 12 points as they finished fourth in the holiday tournament as they lost to the Campbellsville Lady Eagles 37-24.

Five straight points for the Lady Cats, with three points from McCutchen and a basket from junior Alera Barbee gave them a 5-2 lead in the 1st Quarter. McCutchen went on to score six points but all of the Lady eagles' came from 3-pointers as sophomore Lainey Watson hit three with one each from sophomores Briante Gowdy and Kaylyn Smith for a 15-9 lead at the end of the first.

Franklin-Simpson's defense held Campbellsville to one made field goal, four pints total in the 2nd Quarter. The Lady Cats got eight points, four from McCutchen with two each from Barbee and freshman Ashanti Johnson as they trailed 19-16 at halftime.

Franklin-Simpson had a major scoring drought in the 3rd Quarter as they did not make a field goal. Their only points came from a pair of free throws by freshman Conleigh Wilson. Watson added another 3-pointer, her fourth of the game, for seven points in the quarter as Campbellsville led 34-18 at the end of three.

The lady Cats scored four points early with a basket from Johnson along with two free throws by McCutchen. Wilson also added a basket late as junior Catlyn Clausen scored the only made field goal for the :ady Eagles as they went on for the 37-24 victory over Franklin-Simpson to claim third place in the KYSports.TV Holiday Christmas Classic.

Senior Evyn McCutchen led the Lady Cats with 13 points with freshman Hadley Turner adding 12 as they had too many missed opportunities as they lost to the host team, the Caverna Lady Colonels, in the semifinal round of the winners' bracket.

Franklin-Simpson led early 6-4 with a basket from junior Alera Barbee and free throws from McCutchen and Turner. Senior McKeeya Faulkner had seven points in the quarter with freshman Kaliana Richardson for adding four points four points as Caverna led 15-9 at the end of the first.

six. Faulkner and Richardson eachs cored five points for the Lady Colonels as they led 29-24 at halftime.

Freshmen Ashanti Johnson and Turner scored some early points for Franklin-Simpson as they tried to cut into Caverna's lead. But Richardson's 3-pointer along with a basket from senior Stacie Burnett quickly changed the momentum of the game around as the Lady Cats trailed 43-33 heading into the 4th Quarter.

Barbee and Turner combined for the three made field goals in the quarter for Franklin-Simpson but Caverna was able to maintain their double digit lead Faulkner scored three points with two each from: seniors Amayah Nolley and Richardson and freshman Tavi gonzalez as the Lady Colonels advance to the championship game of the tournament with a 54-41 victory.

Kaliana Richardson led all scorers with 18 points with McKeeya Faulkner pouring in 17 points and Stacie Burnett adding 10 for Caverna.

Senior Evyn McCutchen's game high of 21 points led the Lady Cats to win their opening round game of the tournament with a 46-27 victory over the St. Francis Wyveers.

McCutchen had a big 2nd Quarter as she nearly outscored St. Francis by herself by scoring 10 of Franklin-Simposn's 14 points. Freshman Abigail Runyan scored four points as the Lady Cats led 27-17 at halftime.

McCutchen kept it going in the 3rd Quarter as she scored eight points with Johnson adding four points for Franklin-Simpson. St. Francis were held to six points in the period as Marshall along with senior Adelaide Lenihan and junior Charli Clark as the Lady Cats led 39-21at the end of three.

The Wyveers got baskets from Clark and Marshall along with senior Caroline Pepa as Barbee along with freshmen Le Le Partinger and Conleigh Wilson each scored baskets in the 4th quarter for Franklin-Simpson as they advanced to the next round of the winners' bracket of the tournament with a 46-27 victory over St. Francis.