$32.00 for 365 days
Get Started
You are the owner of this article.
Edit Article Add New Article
Home
News
Opinion
Sports
Records
Features
Obituaries
Classifieds
WFKN
1 of 2 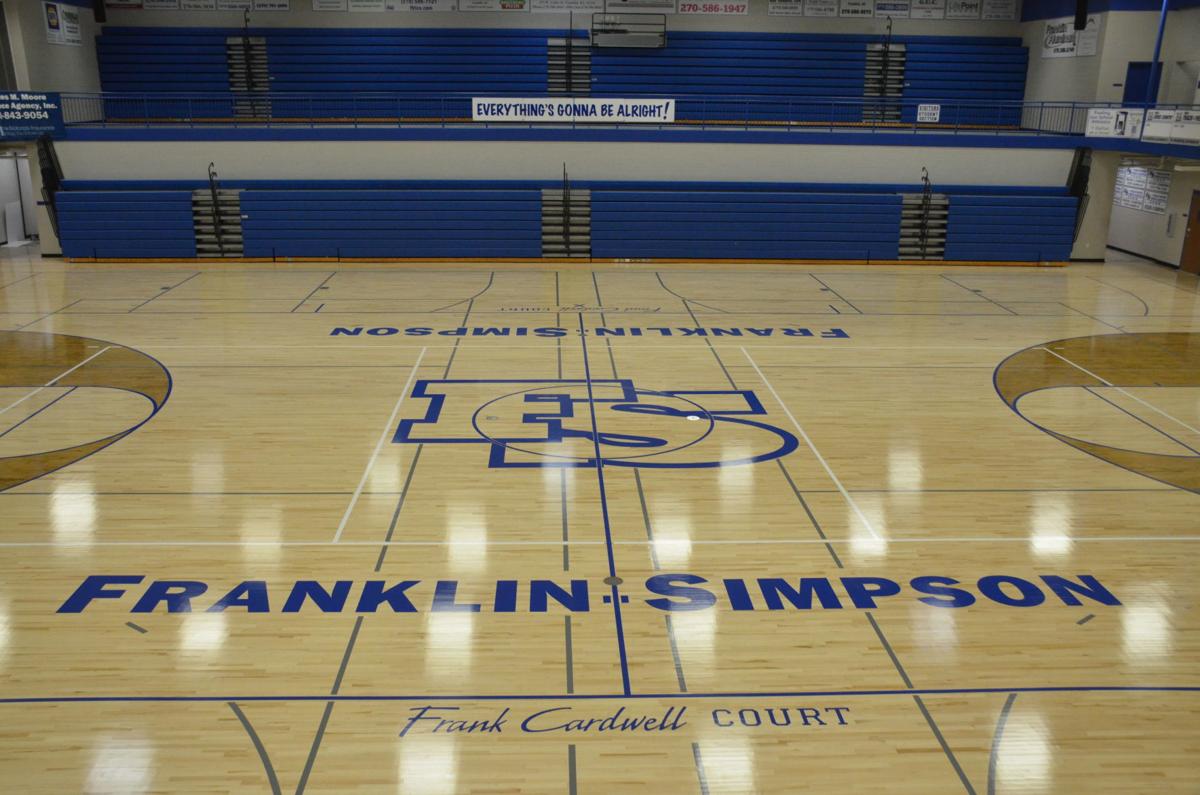 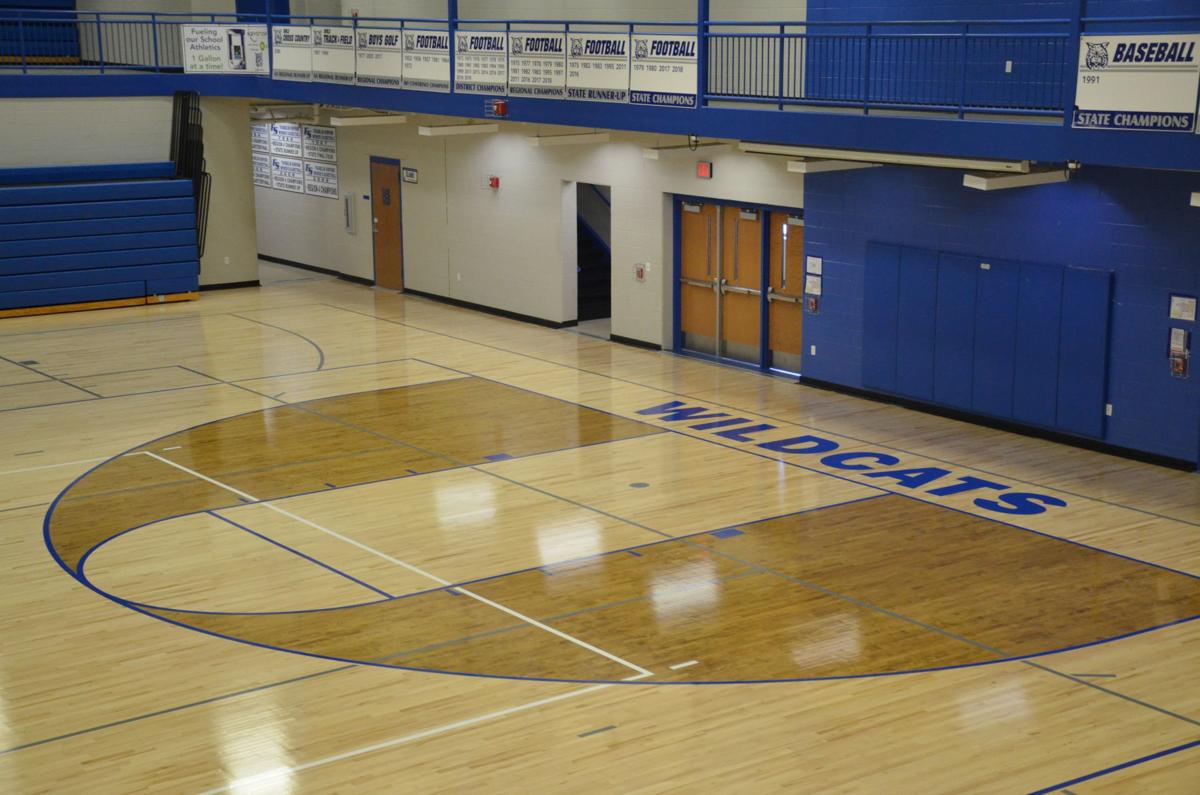 When the 2020-2021 Franklin-Simpson Wildcats’ high school sports season begins in August, fans will be treated to a new look. The F-S Gym on Frank Cardwell Court recently received a new floor design.

The current facility replaced the “original” F-S Gym during the 2011-2012 season, and has played host to many memorable basketball games and volleyball matches over the last 10 years.

The plan to re-do the gym floor was already in place and planned for the end of this school year. Wildcats’ head basketball coach Dee Spencer had spent time looking at different designs for the makeover. The COVID-19 pandemic allowed additional time for the project moving up its completion timeline. Conrad Flooring, of Smiths Grove, did the work with designs ideas provided by Spencer.

On May 8, Spencer and Lady Cats’ head basketball coach Ashley Taylor gave Franklin Favorite/WFKN reporter Brian Davis a tour of new updated gym. The F-S logo has replaced the wildcat image in center court, which faces the F-S fans’ section of the gym. The name “Franklin-Simpson” is spelled out with Frank Cardwell Court spelled in cursive on both sides of the floor. The free throw line is white, but inside the arc of the 3-point line there is now a dark brown color. The entire floor now appears darker in color. According to Spencer, the flooring company sanded the old wax, which was oil-based and replaced it with a water-base finish.

“The blue trim looks really good and I just wanted to do something different by putting brown color inside the 3-point line,” Spencer said. “Hopefully, we can get to start playing on it soon. None of the kids have been on it and very few of the kids have seen it. Let’s hope that we will play well on [the new court].”

Coach Taylor added her impression of the new design.

“It was a surprise to me,” Taylor said. “I came up here after I was hired and this was the very first thing that David (Clark) wanted to show me. The floor looks really good. Dee (Spencer) designed and deserves the credit for this. Everyday, myself, along with the other coaches are counting down the days. I had some players reach out and were very excited, but none of them has actually seen it and that is what we are waiting on, to get them in here and get to work.”

“Obviously, we sought the input of our administration and coaches. That being said, Coach Spencer deserves a lot of credit for his vision and the finished product,” Wildcats’ Assistant Athletic Director David Clark said. “The reviews have been very positive, so we think we have a new gym floor our school and community can be very proud of.”

“In our weekly Google Neighborhood meeting with the high school staff, Mrs. Petty, our chorus teacher, proposed a talent show with teachers involved. So I got to brainstorming on how I could make a contribution toward Mrs. Petty’s idea,” Clark said. “A couple of Saturday’s ago, Sebrena Clark wanted to go country cruising to break up the stay at home directive. The song ‘Everything’s Gonna Be Alright’ came over the radio and I told Sebrena ‘that’s it!’ Of course she immediately thought the being in isolation had ‘sprained my brain.’ But we are very proud of the new floor so my thought was to unveil the floor to all of our students, especially our seniors, who are going through an unprecedented loss of moments and memories. The song seemed to mesh with a vision to create a symbol of hope and peace for the future. So I assembled a few of our coaches [including] softball head coach Todd Caudill, girls basketball head coach Ashley Taylor, football head coach Max Chaney, boys basketball head coach Dee Spencer, assistant boys basketball coach Jermaine Robey, volleyball head coach Megan Vincent and baseball head coach Matthew Wilhite and I told them my idea and without hesitation everyone was in. Unfortunately Megan and Matthew had unexpected conflict rise the day of the shooting so we adjusted because ‘The Show Must Go On.’ Having ideas and visions are fine, but you better have a person that can make this happen and Allie Meador deserves a ton of credit for the final product. Allie is a very talented teacher who is very tech savvy. Hopefully the video made our students, staff, community, and especially our seniors smile.”

To view the video, visit the website www.youtube.com and search “FSHS presents Everything’s Gonna Be Alright”

The Lady Cats’ volleyball team is the first athletic group currently scheduled to play on the new floor. According to Vincent, their season home opening match is scheduled against 13th District foe, the Logan County Lady Cougars, on Aug. 18 and the seniors are excited to get to compete on their new gym floor.

“I was really excited when I saw the new floor and I am really hoping I will get to play on it this season,” FSHS player Carly Bush said. “My sport means so much to me and it feels great that we will be able to play on a new court for my final year in the high school.”

I think in a hard time like this it’s exciting and we needed it. I am so excited to play on our new court,” FSHS player Lauren Johnson said. “It’s exciting we get to break in the new court for my senior year.”

“I haven’t seen it yet but it is exciting that we’re going to be the first team to play on the new floor,” FSHS player Fantasia Suggs said. “I’m excited for next season and ready to get things started.”

The Lady Cats and Wildcats basketball teams are scheduled to have their 2020-2021 season home opener on Tuesday Nov. 24 against the Monroe County Falcons, of the 15th District, in a girls/boys varsity doubleheader. Franklin-Simpson High School is also set to host the prestigious 13th District Boys and Girls Basketball Tournament in late February 2021.

“The new floor came at the right time,” Spencer said. “I love it when a plan comes together.”