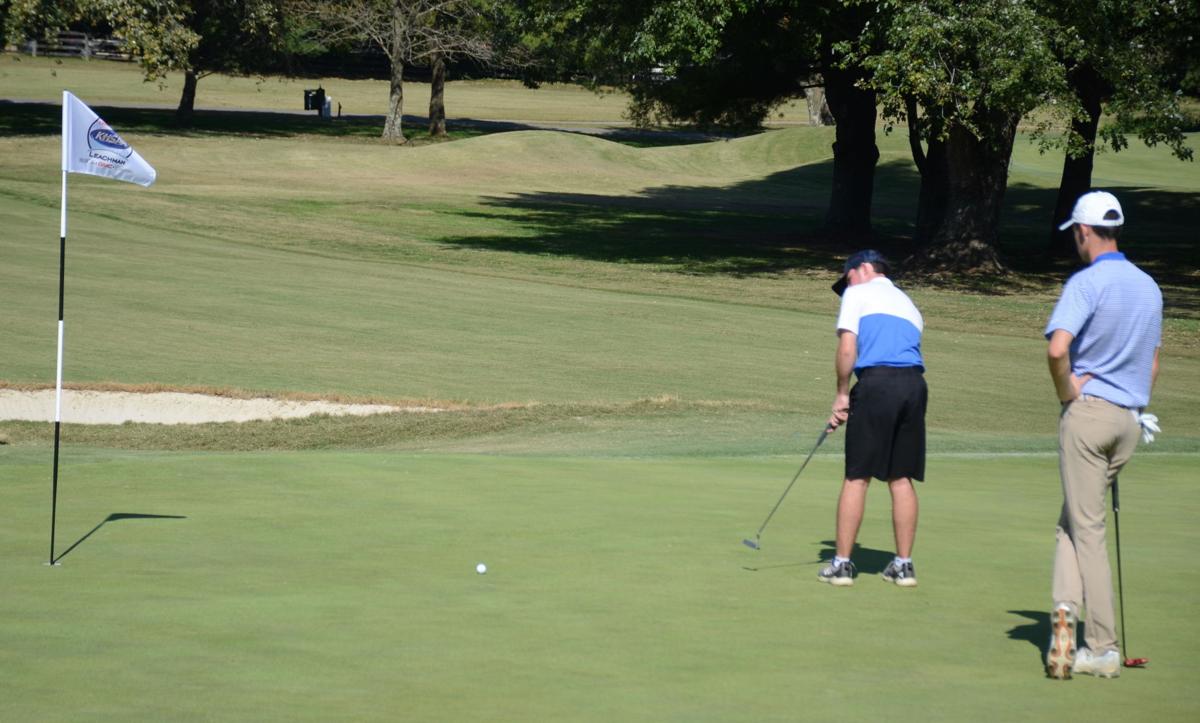 Wildcats’ junior Chase Wilson attempts his putt for birdie on the seventh hole at the Bowling Green Country Club during last Wednesday’s championship round of the Leachman Buick-GMC-Cadillac/KHSAA Boys State Golf Tournament. 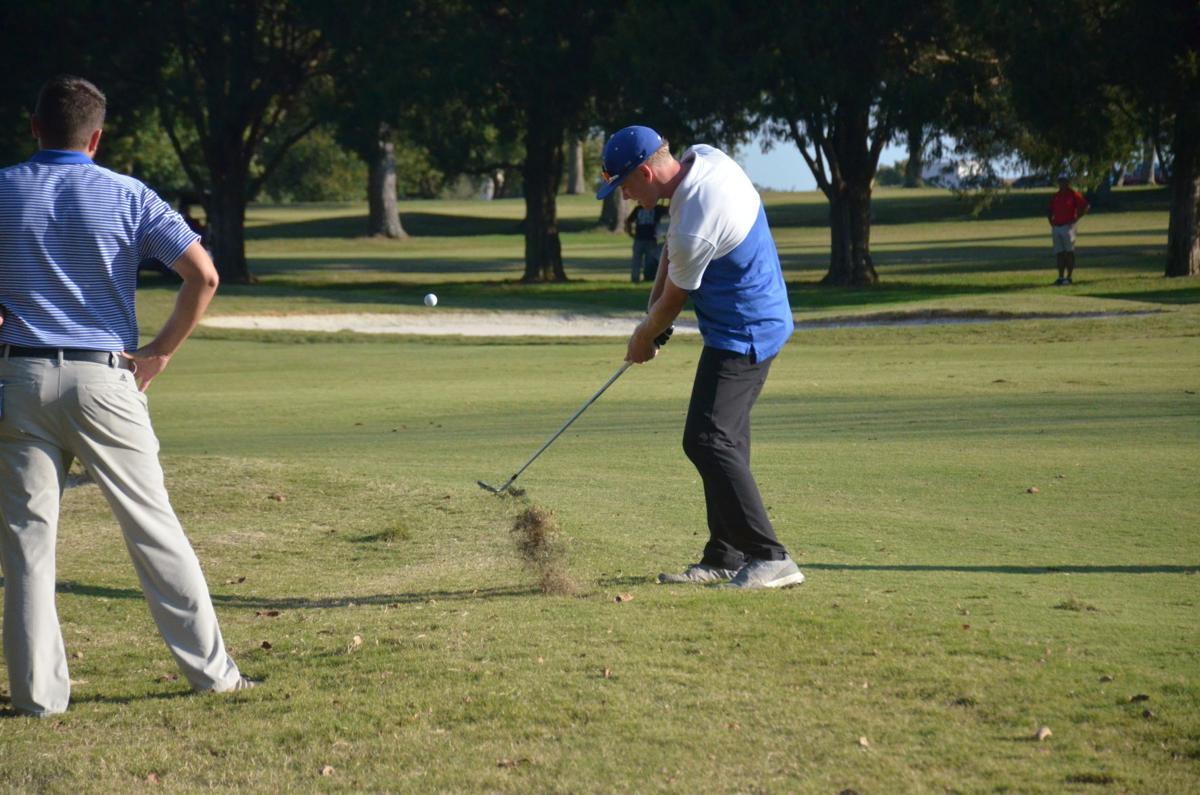 Wildcats’ senior Dalton Fiveash shoots his second shot to the green of the 7th Hole with head coach Alec Silchuk (left) watches on during last Wednesday’s championship round of the Leachman Buick-GNC-Cadillac/KHSAA Boys State Golf tournament at the Bowling Green Country Club. 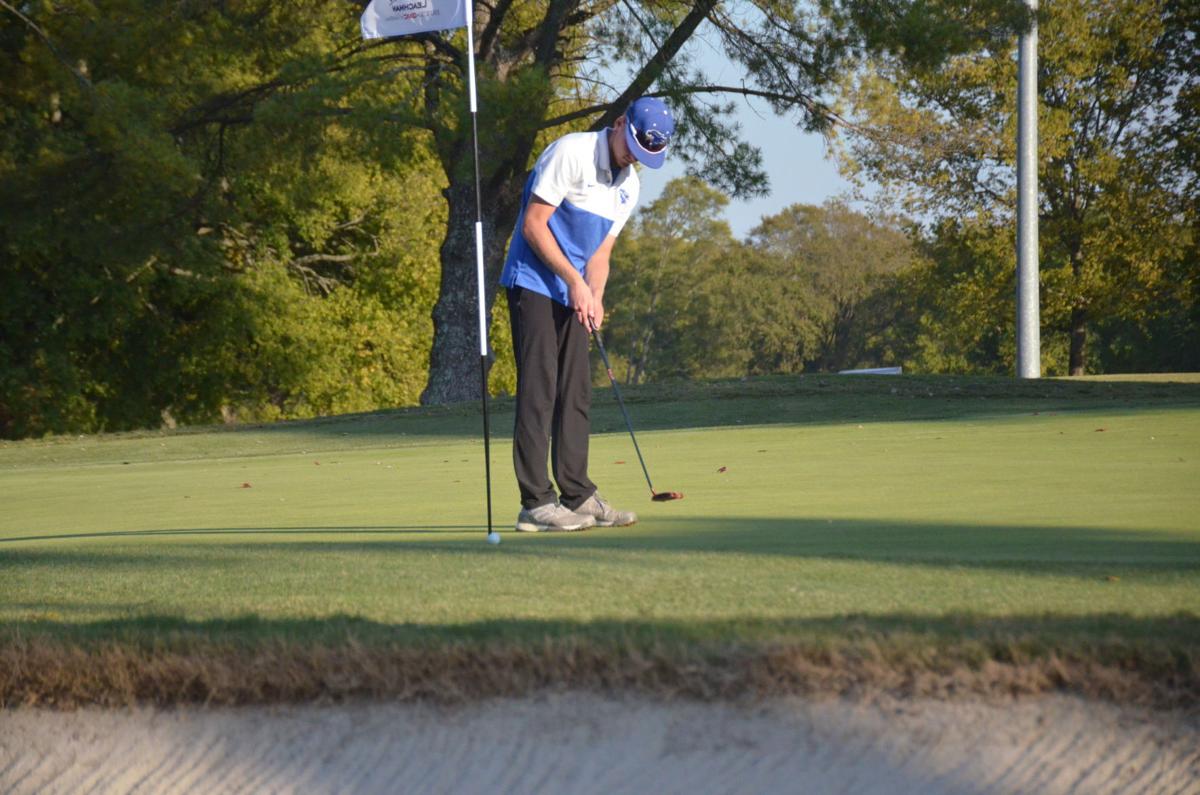 Wildcats’ senior Dalton Fiveash makes his final putt of his career during the championship round of the Leachman Buick-GMC-Cadillac/KHSAA Boys State Golf Tournament at the Bowling Green Country Club last Wednesday.

Wildcats’ junior Chase Wilson attempts his putt for birdie on the seventh hole at the Bowling Green Country Club during last Wednesday’s championship round of the Leachman Buick-GMC-Cadillac/KHSAA Boys State Golf Tournament.

Wildcats’ senior Dalton Fiveash shoots his second shot to the green of the 7th Hole with head coach Alec Silchuk (left) watches on during last Wednesday’s championship round of the Leachman Buick-GNC-Cadillac/KHSAA Boys State Golf tournament at the Bowling Green Country Club.

Wildcats’ senior Dalton Fiveash makes his final putt of his career during the championship round of the Leachman Buick-GMC-Cadillac/KHSAA Boys State Golf Tournament at the Bowling Green Country Club last Wednesday.

Fiveash, who played in his last golf tournament for Franklin-Simpson, finished tied for 36th, He shot a 74 in Tuesday’s qualifying round, tied for 16th heading into Wednesday’s championship round. He finished the tournament by shooting an 83, 11 over par, for a score of 157.

“My t-shirt does say make them believe but I couldn’t do that. It was a very rough two days at state,” Fiveash said. “I couldn’t hit the fairways like I wanted. Today was not a good day to be on the golf course. Probably hit two or three fairways and having two pars on the frontside is not good. My last five holes with the guys I played with, we were just swinging for it, don’t think about it and have fun.”

“It was a little bit disappointing after winning the region,” Wilson said. “I really felt good coming into the tournament but that is how the game of golf goes. Sometimes you’re hot. Sometimes you don’t have the right breaks. I caught some bad breaks over the past couple of days, but ultimately, I didn’t hit it well to get myself into contention. This course is mandatory that you hit the greens and fairways in the right spots very consistently.”

“This course can bite you quickly if you can’t get on the fairways and greens and even though they did that majority of the time, they could get nothing going,” Wildcats head coach Alec Silchuk said. “These greens were really quick. They were definitely PGA tour speed. Probably the quickest greens they played on all season. I believe they were 12 to 14 speed, that’s U.S. Open type speed. It was a really tough tournament not only for Dalton and Chase but for everyone who played. You had to have your game on all cylinders to score well. A couple of golfers scored decently but it was a major struggle for almost everyone.”

Binge-watching the Big Ten: The biggest storylines to watch in 2020

“Seems like yesterday that I was a freshman for the team and my time has flown by fast,” Fiveash said. “My golf career was everything you could ask for. Region champion my first year. Qualified for state in my last three. I think that Chase and I could go down as the best or one the best duos to ever play for Franklin-Simpson.”

“It was a good year for me,” Wilson said. “I went through some rough patches with trouble finding my swing early on. Looking back, I tied for second here in early August, tied for first at Crosswinds the next day and eventually won the region to get back to state for the fourth year in a row. A lot of positives to take away from this year but there are a lot of things to work on for my senior year.”

For the season, the Wildcats had numerous top five finishes in tournaments with great play from not only Fiveash and Wilson but from seniors Jake Konow and Dawson Owens and junior Ben Banton. Plus, numerous younger players were able to compete in some match play events to gain some playing experience as well.

“Overall, it was a great season,” Silchuk said. “Goal was to win the region and we came up short on that. Our second goal was to get guys to qualify for the state tournament and we did that. Replacing three seniors will not be easy but we do have a lot of players with potential. Get them to work and get stronger over the winter, work on their game.”