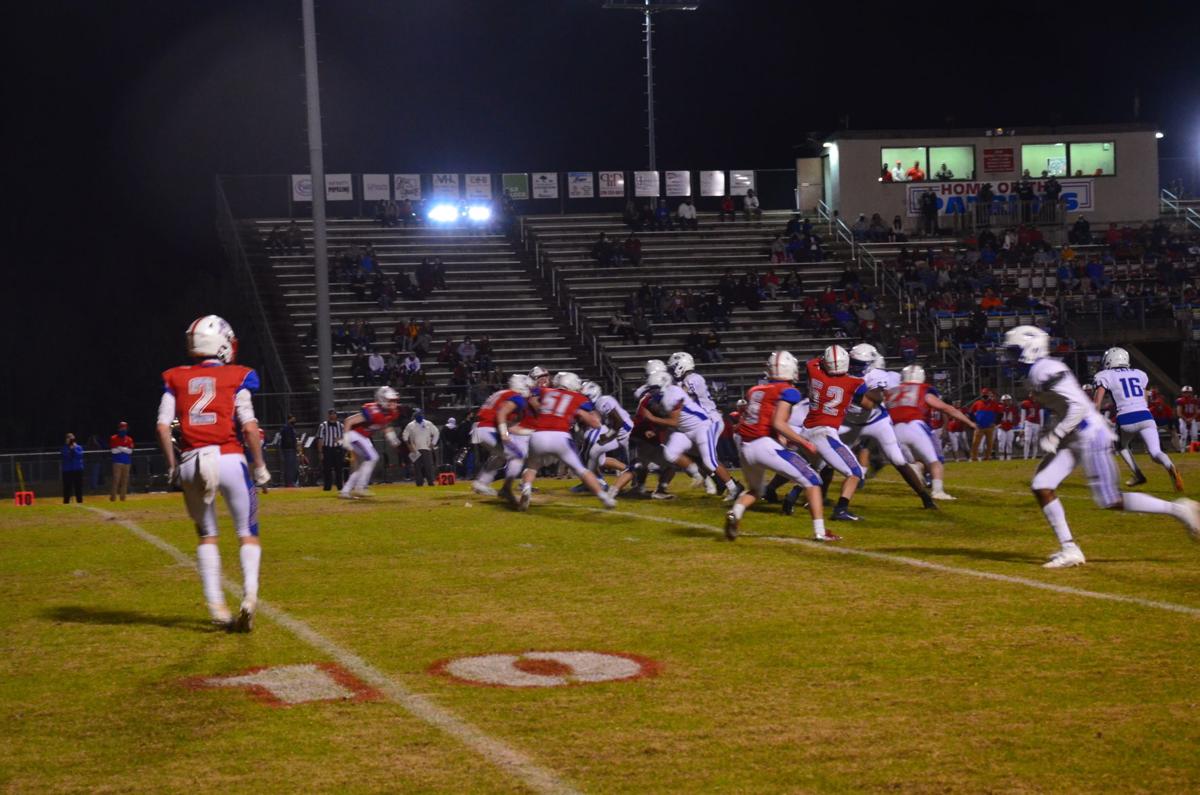 The Wildcats’ offense trying to score points against the Patriots’ defense in the red zone at Patriots Field in last Friday night’s Class 4-A Region 1 District 2 opening round playoff game. 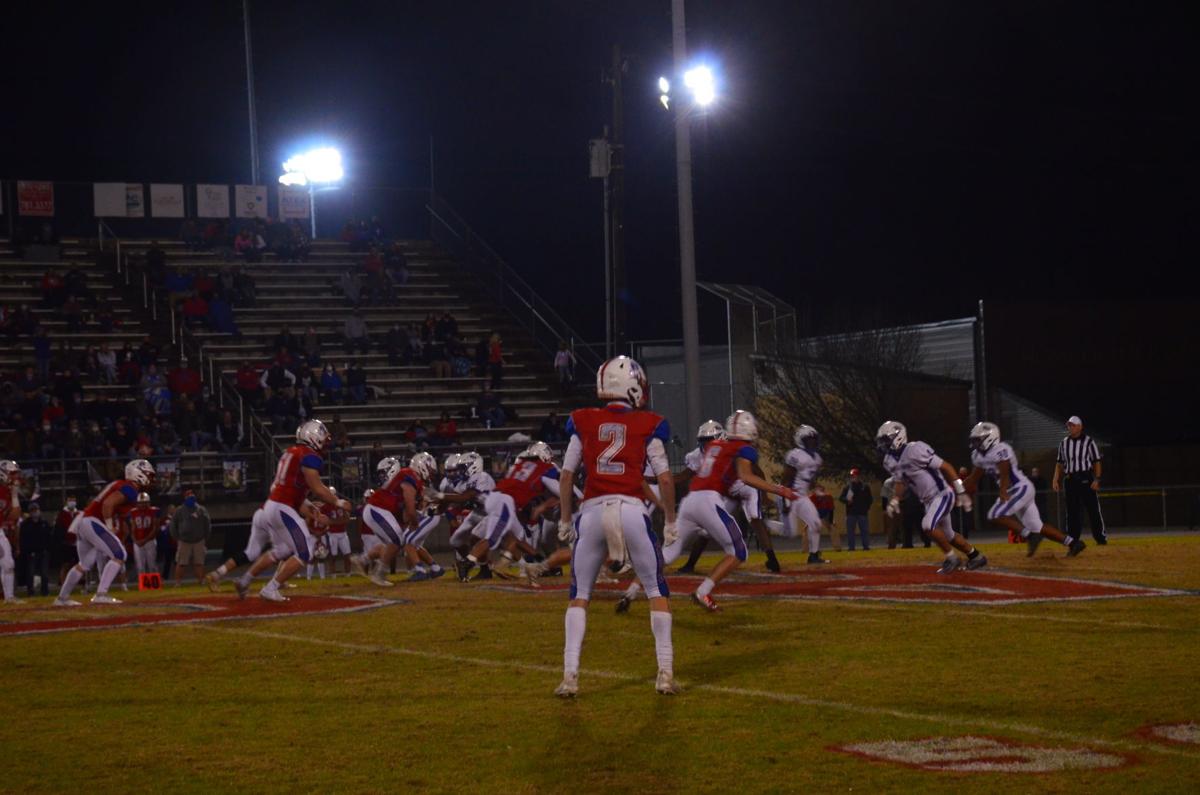 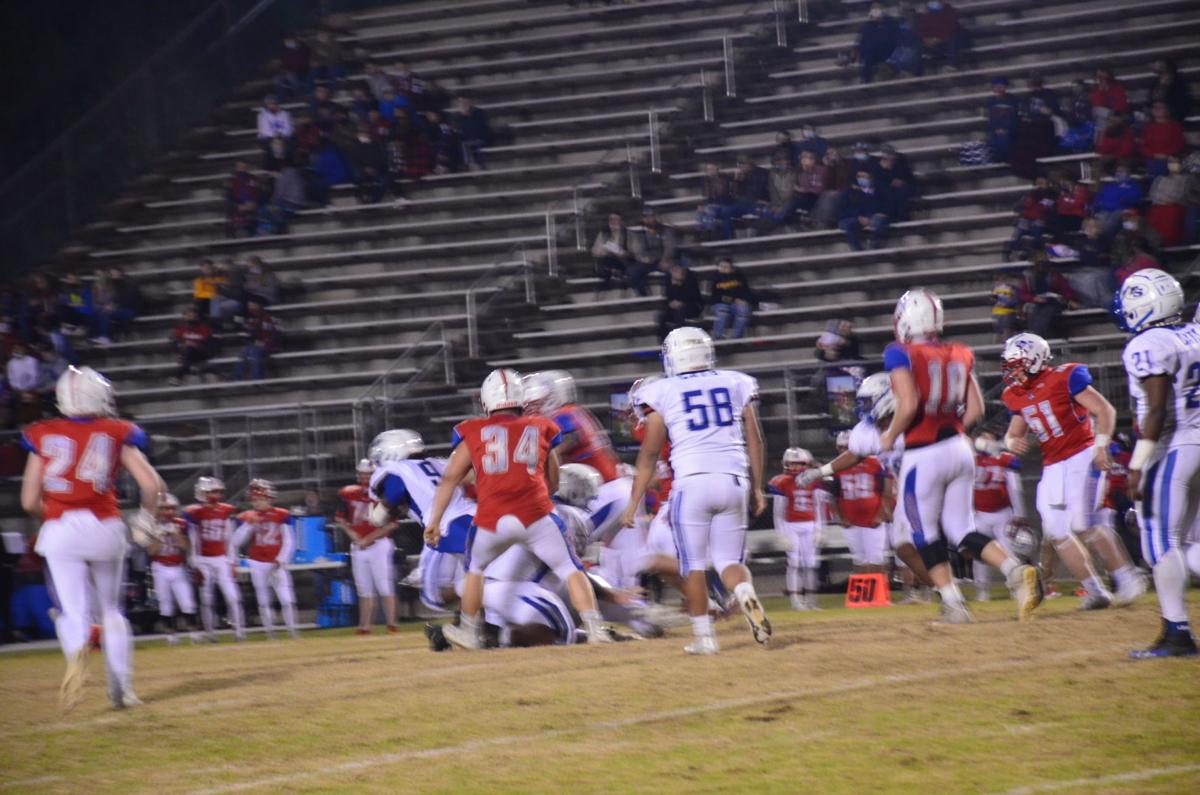 Wildcats’ senior Malik Carter (9) runs through the Allen County-Scottsville Patriots’ line of scrimmage during the opening round of the Class 4-A Region 1 District 2 playoffs last Friday night at Patriots Field.

The Wildcats’ offense trying to score points against the Patriots’ defense in the red zone at Patriots Field in last Friday night’s Class 4-A Region 1 District 2 opening round playoff game.

Wildcats’ senior Malik Carter (9) runs through the Allen County-Scottsville Patriots’ line of scrimmage during the opening round of the Class 4-A Region 1 District 2 playoffs last Friday night at Patriots Field.

The Franklin-Simpson Wildcats football team’s season came to an end as they lost in the opening round of the Class 4-A Region 1 District 2 UK Orthopedics Commonwealth Gridiron Bowl Football playoffs 50-28 to the Allen County-Scottsville Patriots.

With the loss, the Wildcats ends their seven game winning streak in the opening round of the Class 4-A playoffs. It’s also head coach Brad Hood’s first win over F-S in the playoffs.

AC-S will play the Warren East Raiders in Scottsville on Friday night for the District 2 championship in Class 4-A Region 1. The Raiders defeated the Russell County Lakers, the regular season district champions, 33-14 at Russell County.

The game started on time but was delayed early due to a power failure for almost 20 minutes. Once the lights were restored, the fireworks began.

The Patriots scored first with a 10-yard touchdown run from senior Landon Witcher as they took advantage of great field position for a 7-0 lead.

The Wildcats responded with back to back touchdowns. They quickly tied the game at 7-7 with an 80-yard touchdown pass and run from junior Luke Richardson to senior Kyjuan Stutzman. They took the lead in the 2nd Quarter with a 3-yard touchdown run by Richardson. Sophomore Isaac Callis’ extra points gave F-S a 14-7 lead.

But AC-S quickly seized the momentum back with three touchdown drives before halftime.

Three plays following senior Trace3 McIntyre’s 62-yard run that flipped the field position, senior Dillon Rookstool ran for a 14-yard touchdown. On their next drive, McIntyre ran for a 57-yard touchdown and just before the end of 1st Half, he completed a 12-yard touchdown pass to senior Jax Cooper. With the extra points from junior Thorny Walker, the Patriots led 28-14 at halftime.

AC-S’ momentum grew even more as Cooper took thre opening kickoff 64 yards for a touchdown for a 36-14 lead as they converted their 2-point conversion with JcIntyre completing his pass to senior Brandon Baxter.

Evening up the score: The differences for MU the second time around against Tennessee

Steven M. Sipple: Frost biting back at a certain narrative shows a level of resolve in the coach

F-S kept battling as they scored touchdowns on both of their offensive drives in the 3rd Quarter as Richardson scored his second rushing touchdown of the game with a 1-yard run and senior Branson Andrews ran around the left side for a 3-yard touchdown. They converted a 2-point conversion with Richardson completing his pass to senior Andrew Ogles.

But the Patriots’ ground game was dominant in both the 2nd and 3rd Quarters. McIntyre also ran for his second touchdown of the game with a 12-yard run and Witcher finished the game with a 23-yard touchdown run that gave AC-S a 50-28 victory over F-S.

“They ran everything at us and our youthfulness showed and their experience showed up,” Wildcats head coach Max Chaney said. “We wanted to start fast and we didn’t but we battled back. Remember, we had a lot of sophomores and freshmen on the field not only tonight but during the season. If you would have told me that we would have put up 28 points tonight, we would be right in the middle of it and that’s where we wanted to be. Give ourselves a great chance to win the game.”

The Patriots outgained the Wildcats 355-353 in total yards of offense. Richardson completed seven of his 15 passes for 192 yards for a touchdown with an interception. Graves led the team with three receptions for 90 yards with senior Andrew Ogles having two receptions for 15 yards and Stutzman with the one reception for an 80-yard touchdown.

Junior Jayden Wells had a team high of 73 yards on 13 carries and junior Omar Harrison had 16 carries for 61 yards. Richardson had two rushing touchdowns with Andrews having one.

“It seems like forever since we played Franklin-Simpson and they have improved a lot since we played them,” Patriots head coach Brad Hood said. “I knew they were going to come out hard and we got down to them early but our kids took the game from being seven down to 14 up in 10 minutes in the 2nd Quarter and that shifted everything around. They kept scoring and we kept answering and it’s hard to beat a team twice especially if they have the F-S on the helmet. Those young guys have a very bright future ahead of them under Max (Chaney), but I am glad that we were able to get two wins against them this season.”

The Wildcats finish their season with an overall record of 3-5. Chaney is excited about the future of his young football team.

“I am a big strength guy and we will work on that during the offseason,” Chaney said. “We have a lot of young guys that needs to be stronger. We got to get stronger and faster. To me, the weight room makes great athletes even better and average athletes even greater. We have a lot of young guys dob a lot of good things for just this season and there was a lot of positive things to take away from this season.”