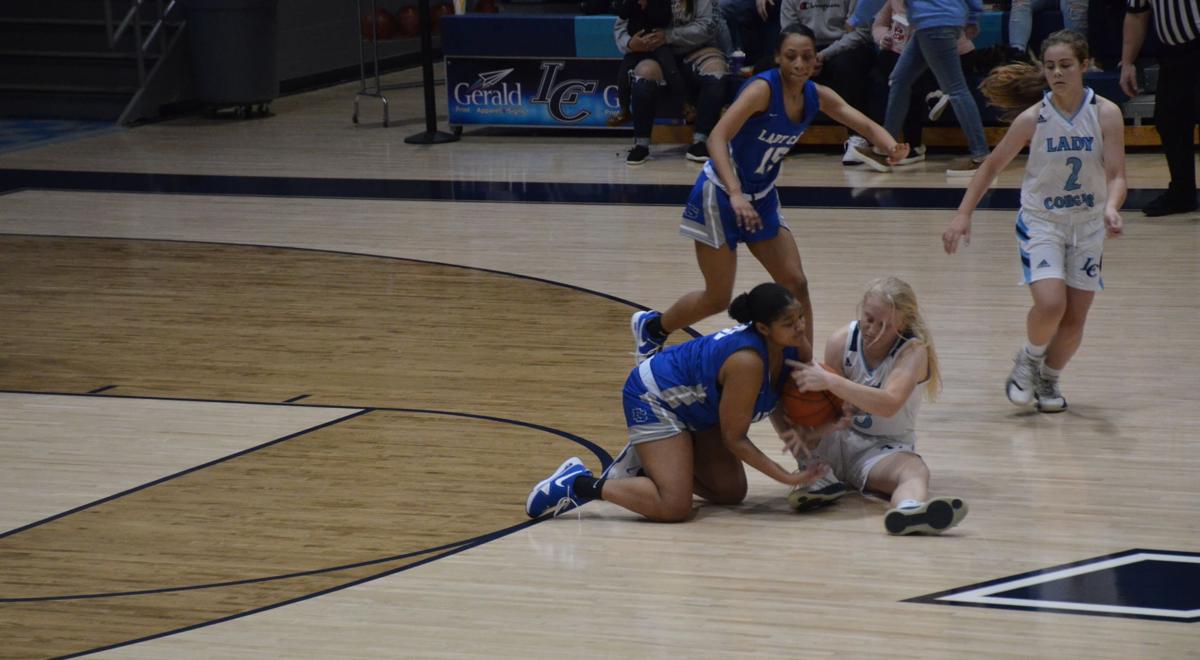 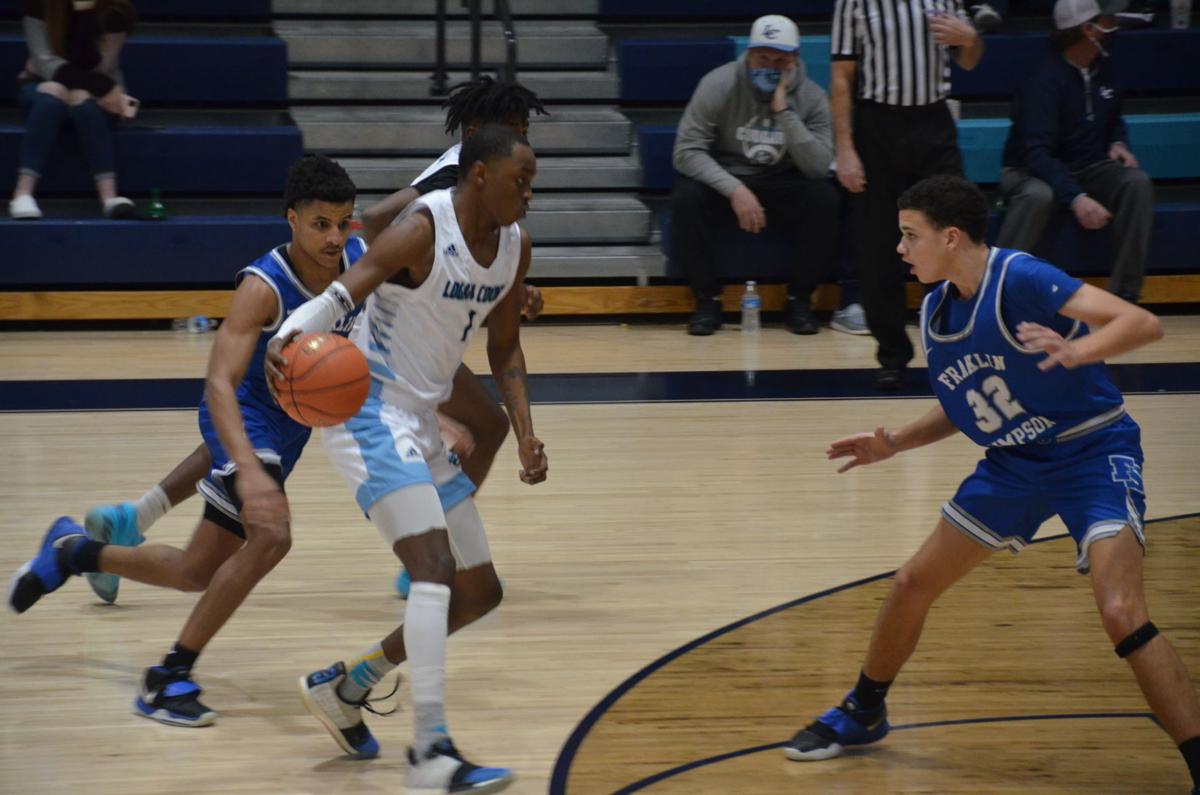 In their first 13th District games of the season, the Franklin-Simpson Lady Cats and Wildcats basketball teams each came away with hard fought victories over the Logan County Cougars last Friday night.

The Lady Cats used a tremendous 4th Quarter defensive effort to come away with their first 13th District victory of the season over the Lady Cougars.

Franklin-Simpson improves to 2-1, 1-0 in district play, while Logan County remains winless at 0-3 and 0-1 in the district.

“I felt like we executed our game plan perfectly tonight,” Lady Cats head coach Ashley Taylor said. “We worked hard prepping for this game. We had this game marked on our schedule and they came out ready and executed what we have been working on to a T.”

“Tonight’s game was a grind,” Lady Cougars head coach Dedra Adler said. “We have three players not available right now so that hurt us a bit with our depth. Not really wanting to play against any district opponent for your third game of the season with so much youth and we have a lot of it. I was very pleased with them.

Franklin-Simpson started the 2nd Quarter on a 6-2 run with points from sophomore Le Le Partinger and Turner for a 15-7 lead. Later, Norwood ’s second 3-pointer of the game gave the Lady Cats an 18-10 lead. Emily Borders drained a 3-pointer with a basket from Costello for Logan County but senior Alera Barbee’s basket towards the end of the 1st Half gave Franklin-Simpson a 20-14 lead.

Turner’s four points in the 3rd Quarter helped the Lady Cats to maintain their six-point lead. With four points from Costello and two points each from senior Abby Hinton and freshman Emerson McKinnis, the Lady Cougars tied the game at 24-24. Noorwood scored three points in the final moments as Franklin-Simpson led 27-25 at the end of the third.

The Lady Cats’ defense held the Lady Cougars to one made field goal in the 4th Quarter. Baskets from Le Le Partinger and Turner and Norwood’s third 3-pointer of the game gave Franklin-Simpson a nine-point lead, 35-27. Free throws from: Barbee, Norwood and junior Damyah Hopson down the stretch gave the Lady Cats their first 13th District victory of the season, 41-29 over Logan County.

“We worked on defense. That was the main thing for us this week in practice,” Partinger said. “Me and Hadley (Turner) work together so much in practice on offense and trying to score and tonight, she did. It feels good to get this win tonight. Haven’t won here since 2016 and it showed that we have improved a lot to get a win here.”

“The team is playing hard especially on defense and I am really proud of this team,” Katelyn McAlister said. “I was shocked at first that I would be starting. The coaches have put their faith and trust in me so I trust them into doing what is best for the team.”

Norwood led all scorers with a game high of 18 points with Turner adding 10 points for the Lady Cats. Partinger scored six points with Barbee scoring four, Partinger adding two and Hopson with one.

“The identity of Franklin-Simpson has changed this year. Our identity is about our play on the defensive end,” Taylor said. “Our girls have really bought in to playing solid defense and our offense feeds off of our defense.”

Breaking down the Wisconsin Badgers 2021 recruiting class by position

Badgers' defense has chance to remain one of nation's best

“It was a one-point game in the 4th Quarter so we were in it,” Adler said. “I felt like there was a lid on the rim as it wasn’t like we weren’t taking good shots, they just weren’t falling. Maybe we were a little fatigued but the score definitely does not indicate how close and good of a ball game it was. Kudos to Franklin-Simpson as they made plays, knocked down free throws and did what they had to do.”

A 27-15 run late in the 3rd and 4th Quarters helped the Wildcats turn a one-point deficit into an 11-point victory over the Cougars.

“It’s a big win. Anytime you start with a win in district play, you’re happy,” Wildcats head coach Dee Spencer said. “We hang our hat on playing good quality team defense and the guys have been doing that.”

Seven points from seniors Anthony Woodard along with four points from Landon Larson gave the Cougars a 13-5 lead in the 1st Quarter. An 8-0 run by the Wildcats with four points from junior Jalen Briscoe, seven overall, and two points each from sophomore Demarcus Hogan and Connor Vincent tied the game at 13-13. Junior Jeffery Taylor’s 3-pointer at the end of the first gave Logan County a 16-13 lead.

Taylor’s basket opened the 2nd Quarter for a five-point lead, 18-13. With 3-pointers from: senior Andreyous Miller, Hogan and Vincent, the Wildcats rolled off 13 unanswered points for a 26-18 lead. Vincent had a huge quarter as his 10 points led Franklin-Simpson to an 11-point lead, 31-20. Sophomore Zane Batten’s back to back 3-pointers got the Cougars to within single digits as the Wildcats led 33-26 at halftime.

Woodard’s three points led Logan County on a 10-2 run that gave them a 36-35 lead. From there, Miller took over the remainder of the quarter. His seven points, including

His second 3-pointer of the game, with an assist to senior Kadyn Lowe for a fast break basket led Franklin-Simpson to score nine straight points that closed the quarter with a 44-36 lead at the end of three.

Two 3-pointers from senior Blake Wood along with four points from Woodard got the Cougars to within four points on two separate occasions. But the Wildcats were too strong at the end as Briscoe and Hogan each scored two points and Miller’s nine points, including his slam dunk to cap off his 18 points in the 2nd Half as Franklin-Simpson pulled away for the 63-52 victory.

Woodard led the Cougars with 17 points as he was their only player that scored in double figures.

Franklin-Simpson will host the Russellville Panthers at the F-S Gym in their second 13th District game of the season in a girls/boys varsity doubleheader beginning at 6 p.m. All four teams are currently 1-0 in 13th District play.