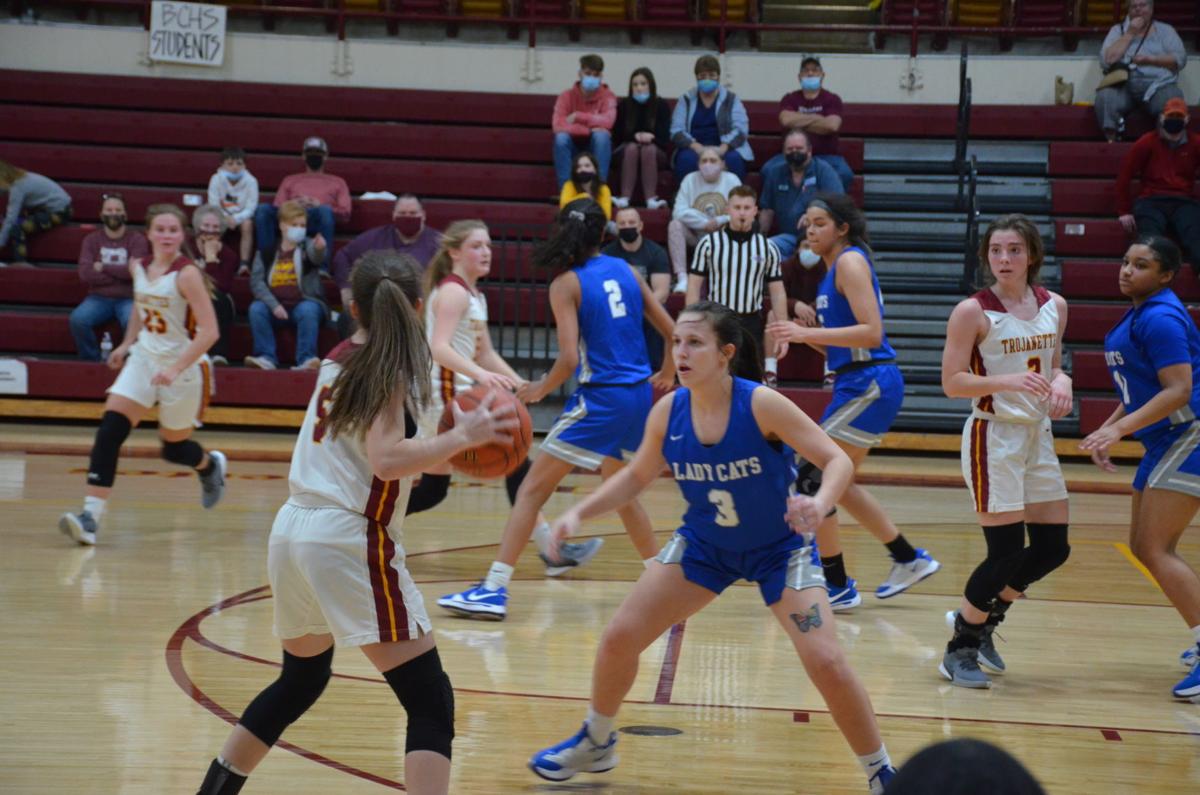 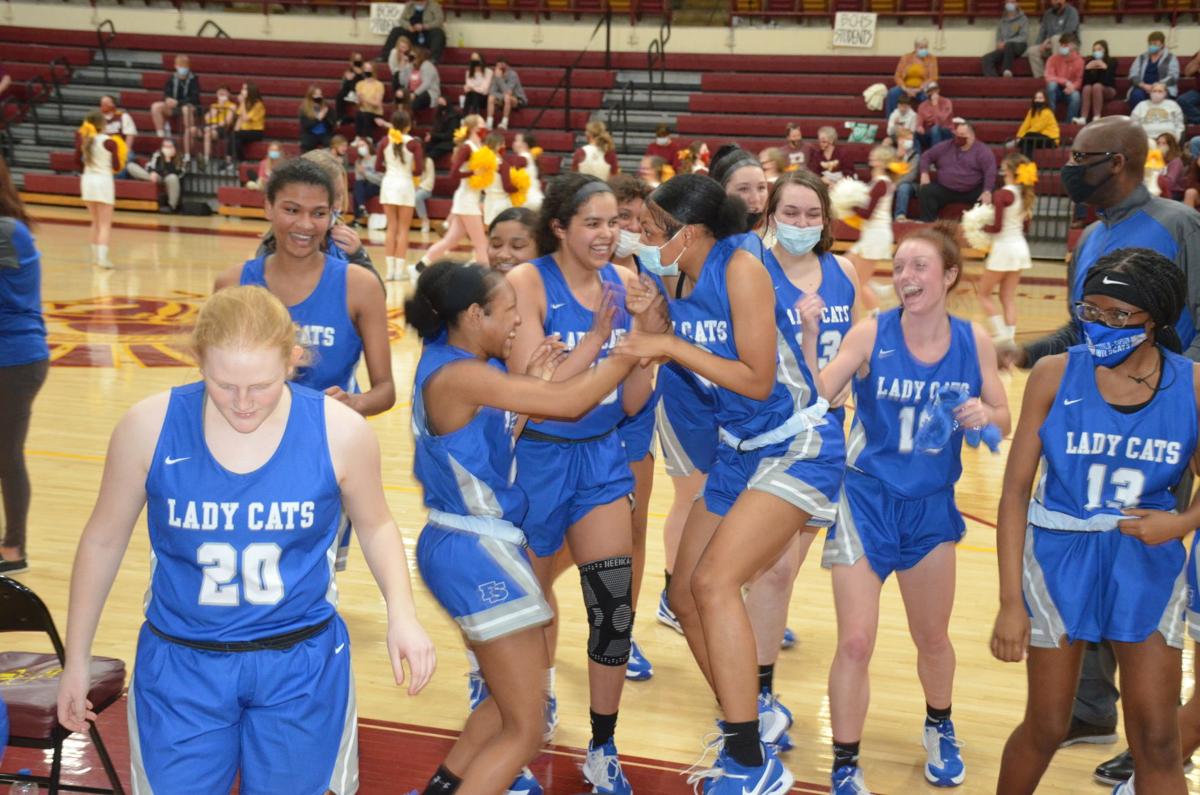 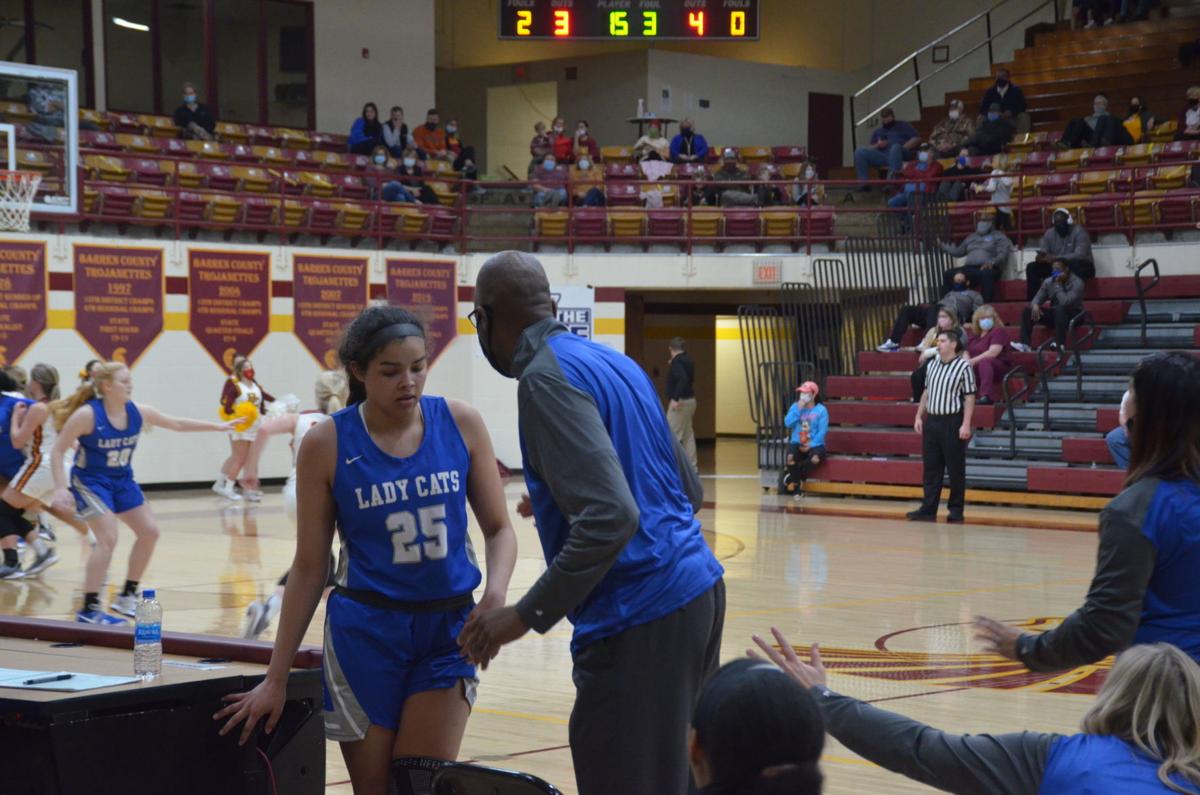 Lady Cats’ sophomore Hadley Turner gets words of encouragement from assistant head coach Jermaine Savage during the second half of their game at Barren County High School last Tuesday night in Glasgow.

Lady Cats’ sophomore Hadley Turner gets words of encouragement from assistant head coach Jermaine Savage during the second half of their game at Barren County High School last Tuesday night in Glasgow.

The Lady Cats’ overcame an early nine-point 1st Quarter deficit to come from behind for the six-point victory.

Franklin-Simpson improved to 9-5 overall for the season as Barren County, who has the most wins in the region, drops their overall record to 11-6. It’s the first time the Lady Cats have defeated Piper Lindsay’s Trojanettes in six seasons and their first win at Barren County since 2013.

“This is truly a great team win,” Lady Cats head coach Ashley Taylor said. “It took every person from the team, our staff, our fans were really into this game. Everyone played a huge role for this great team win.”

“When I got the ball in the paint, I felt like I could do anything,” sophomore Hadley Turner said. “Thanks to my teammates for getting me the ball and this is a great win for us against the poll that said Barren County is the second ranked team in the region. It ’s the biggest win I feel like for all of us in our career. Probably one of the biggest wins the team has had in a long time. People need to quit sleeping on us now.”

The Lady Cats got off to a slow start as Turner made the team’s two shots from the floor in the 1st Quarter. Sophomore Emma Hughes led the Trojanettes with six points with freshman Abigail Varney adding three points as Barren County led 13-5 after one.

“We were very rusty to start,” Taylor said. “We haven’t played since Feb. 13th and we didn’t get back in the gym until the 21st so credit to the girls. They were doing cardio workouts from home to keep in shape. We should not have scored five points in a quarter but in every game, you will have those moments to see if you can respond from that and we kept responding the correct way all night.”

Sophomore Conleigh Wilson’s 3-pointer with Turner’s basket gave Franklin-Simpson a five-point lead, 30-25 in the 3rd Quarter. Later, Norwood drained her second 3-pointer of the game to score seven points with Barbee adding four points as they took a 43-36 lead over Barren County at the end of the third.

Barbee’s opening basket in the 4th quarter gave the Lady Cats a nine-point lead, 45-36. The Trojanettes rallied as Varney along with freshman Katie Murphy and 8th grader Kaitlyn Elmore each scored four points. But Franklin-Simpson did not buckle under the pressure as Turner scored four points with two points from sophomore Ashanti Johnson. Wilson knocked down two free throws late in the quarter and sophomore Le Le Partinger’s basket off a missed free throw sealed the game as Franklin-Simpson defeated Barren County 57-51.

“When Kate (Norwood) got me the ball off the missed free throw for the layup, I was smiling and I didn’t know if the coaches wanted me to hold the ball or shoot the layup but I shot it,” Partinger said. We work hard everyday and it shows when we win. We didn’t practice much during the week of snow. I wanted to but I know we couldn’t but we worked hard the two days before and it showed.”

“It was a big team win for us tonight,” Wilson said. “Everyone played their roles well and stepped up. We got down early but we fought through that and we came together to do that and that’s what it takes.”

Kate Norwood led all scorers with a game high of 18 points with 14 points each from Barbee and Turner for the Lady Cats.

“Everyone is sleeping on us and they don’t know who Franklin-Simpson is and we are a new team. We’re just going up from here,” Norwood said. “We came out and showed them that with a week off or not, we are going to play our butts off together as a team.”

Hughes and Varney each led the Trojanettes with 13 points.

Steven M. Sipple: If NU is looking for leaders, it may do well to start with its fatherly safeties

For Husker WR corps in 2021, familiarity may be one key to increased production

“I thought we played really good in the 1st Quarter. We turned them over but after that we didn’t make shots and we couldn’t rebound. I realize that we are one of the smallest teams in the region but we gotta make up for that with fundamentals and being tough,” Trojanettes head coach Piper Lindsay said. “Alera (Barbee) and Hadley (Turner) are tough to deal with. They’re athletic, tall and they shot right over top of us. We got to be better in games in keeping players like that from getting the ball. Franklin-Simpson did a good job and they outplayed us.”

The Wildcats completed the doubleheader sweep of games as they imposed their defensive will in the final eight minutes to grind out a 50-41 victory over the Barren County Trojans from the 15th District.

Franklin-Simpson’s overall record improved to 8-2 while Barren County fell to 14-5 overall for the season.

With back to back 3-pointers from senior Andreyas Miller and junior Jalen Briscoe, the Wildcats jumped out to an early 6-0 lead. The Trojans quickly tied the game and took the lead 9-8 with junior Taye Poynter’s 3-pointer. Junior Lane Stephens’ 3-pointer from half court as time expired gave Barren County a 14-8 lead at the end of the first.

Four points from Miller along with sophomore DeMarcus Hogan’s 3-pointer and senior Marlon Sims’ basket helped Franklin-Simpson regain the lead, 17-16. The Trojans took the lead back with Poynter’s second 3-pointer of the game and sophomore Eli Brooks’ basket for a 21-20 lead at halftime.

Junior Mason Griggs’ six points along with five points from Brooks kept Barren County’s lead at five points for most of the 3rd Quarter. Later, the Wildcats knocked down back to back 3-pointers by Briscoe and sophomore Gabe Jones to take a 34-33 lead. Poynter scored his only basket of the quarter in the final minute that gave the Trojans a 35-34 lead at the end of three.

The lead changed hands five times in the 4th Quarter but Briscoe’s third 3-pointer of the game gave Franklin-Simpson a 40-38 lead. Later, sophomore Connor Vincent consolidated the lead with a 3-pointer that made the score 43-38. Down the stretch, the defense held Barren County to three points as Briscoe and Miller combined to score the final seven points for the Wildcats as they grinded out a 50-41 victory over the Trojans.

“I knew that I have been shooting the ball bad lately so I had to step up and try to make some shots,” DeMarcus Hogan said. “Barren County was physical but we had to push them back. They made it hard to do what we do but we pulled through.”

“We don’t plan to live off of three-point shots. We like to score in the paint but when we need the threes, they will come,” Connor Vincent said. “Every time I get open, I can feel my shot. I shoot it and most of the time, I make them. I really trust my shot.”

Miller led all scorers with a game high of 20 points with Briscoe adding 11 points for the Wildcats. Mason Griggs was the only player that scored in double figures for the Trojans with 14 points

“Barren County is physical. That’s their identity. That’s what they do,” Spencer said. “We told the guys preparing for them that you can’t complain. You got to play through the contact, the whistles and things will work out at the end.”

Franklin-Simpson will host the Monroe County Falcons for Homecoming at the F-S Gym on Friday night. Tip-off time will be at 6 p.m. and 1220 WFKN Franklin radio will broadcast the doubleheader at around 5:50 p.m.

Both games will be streamed on the internet by going to www.franklinfavorite.con and clicking on the WFKN link in the blue toolbar. Then click on the WFKN Sports tab and press the play button.