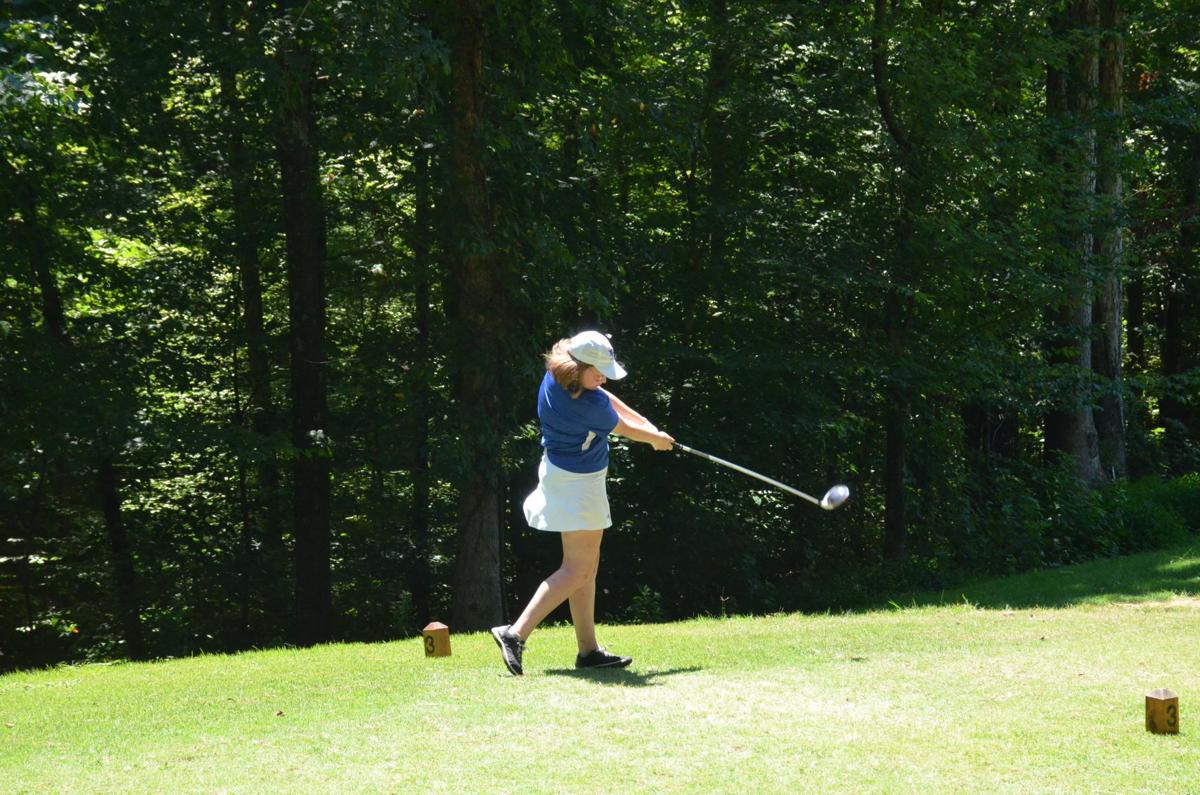 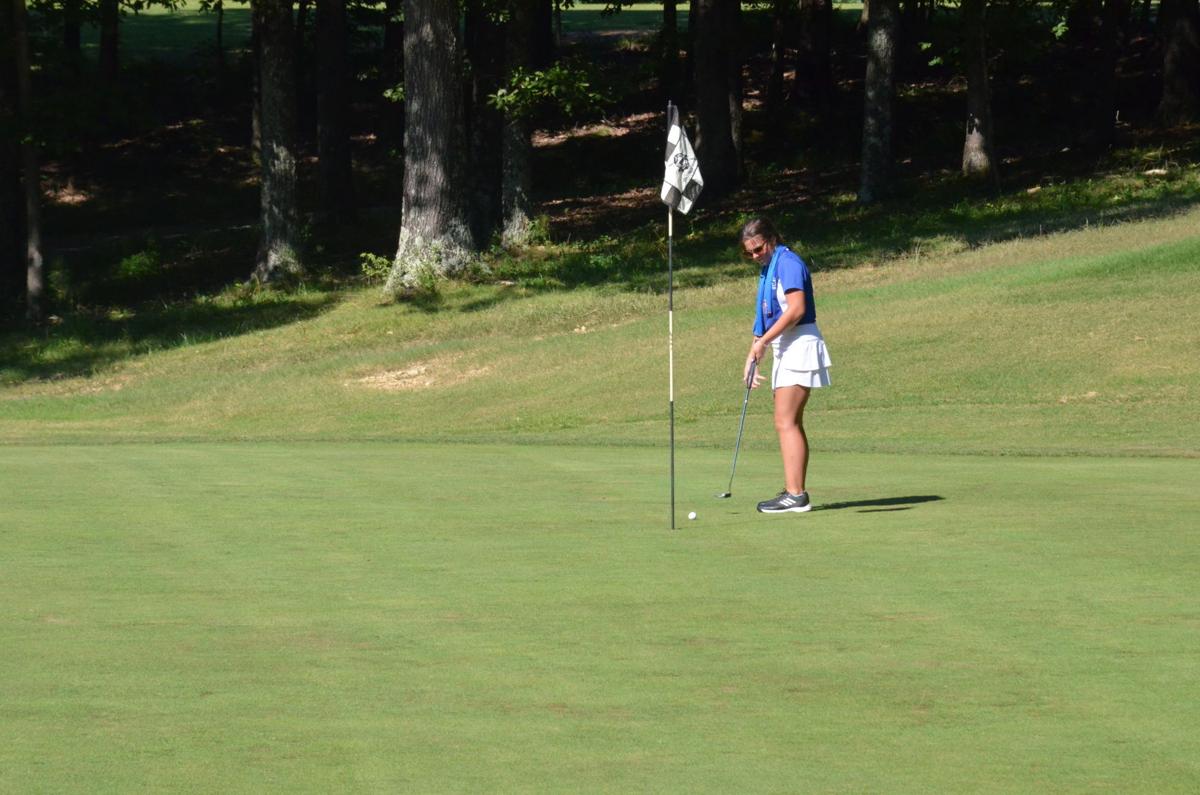 Lady Cats’ 8th grader Morgan Hunter, who made a hole in one in her first tournament played last Monday, finishes her play in the Barren County Invitational last Saturday at Barren River Resort State Park. 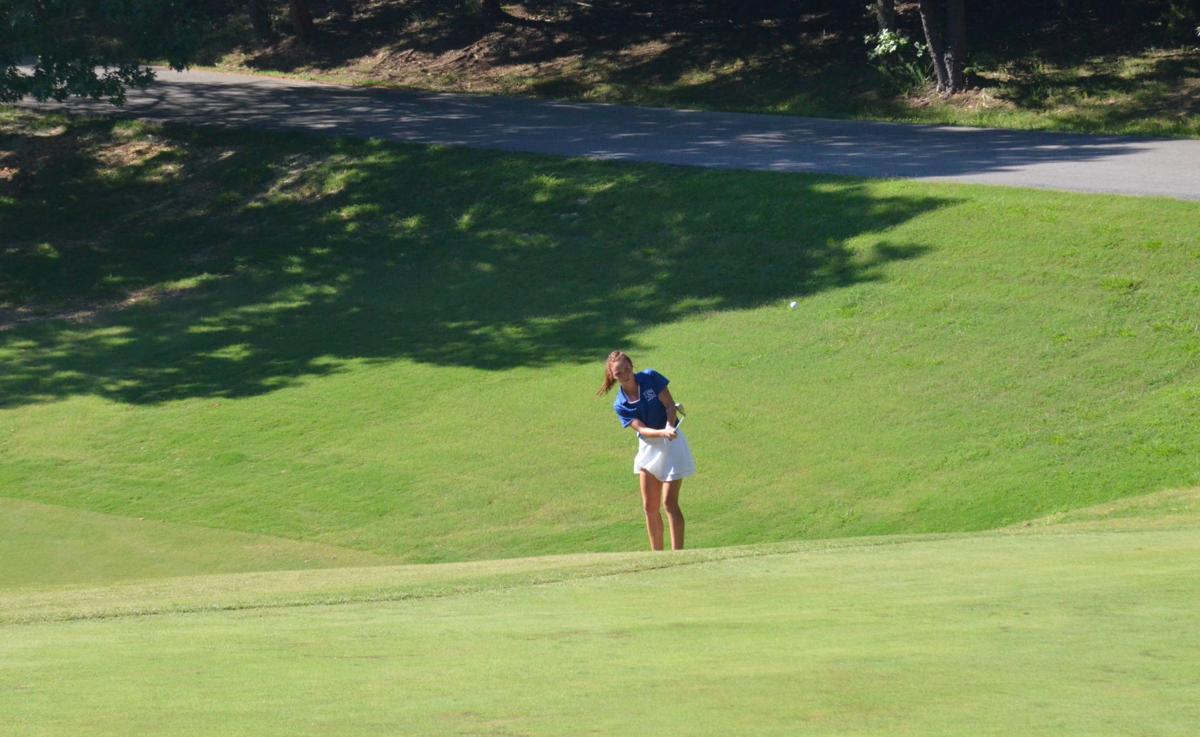 Lady Cats’ sophomore Conleigh Wilson shoots to get on the green of the 9th Hole at the Barren River Resort State Park in last Saturday’s Barren County Invitational.

Lady Cats’ 8th grader Morgan Hunter, who made a hole in one in her first tournament played last Monday, finishes her play in the Barren County Invitational last Saturday at Barren River Resort State Park.

Lady Cats’ sophomore Conleigh Wilson shoots to get on the green of the 9th Hole at the Barren River Resort State Park in last Saturday’s Barren County Invitational.

The Lady Cats opened their season by playing two tournaments on difficult courses last week in Glasgow. Last Monday, they competed in the Lady Scottie Invitational and the Barren County Invitational on Saturday.

The Lady Cats finished 12th with a total score of 478 in last Monday’s season opening tournament.

“I am really proud of how the girls played,” Lady Cats head coach Sarah Dinwiddie said. “For 3 of them it was their first ever tournament and they walked 18 holes. The course made for a tough day but they didn’t let that bother them. They all finished with smiles and looking forward to the next one.”

In her first tournament played as a member of the F-S Lady Cats’ golf team, 8th grader Morgan Hunter shot a hole in one on the 11th Hole at Willow Oaks Golf Course.

“I walked up with a nine tron and because of distance, I figured just try to do a line drive shot to the hole,” Hunter said. “The shot took three bounces, hit the stick and dropped in the hole. I was shocked. I was so happy, I thought about jumping in the lake around the hole but it was so dirty that I decided not to do that.”

“I am so proud and excited for her,” Dinwiddie said “She accomplished something that a lot of golfers can only hope to achieve in their golf careers.”

With restrictions on road trips, Packers look to beat hotel boredom — and it starts with … cornhole?

70 at 50: Halftime pep talk gives Cornhuskers a boost vs. Army

The team shot a score of 459 with Wilson leading the team with a score of 96 and senior Maddie Hall carding a score of 113.

“I played better in today’s tournament than I did on Monday,” Wilson said. “I started on the 10th Hole, the back nine, and was not very good. The front nine holes were better and I needed to change my grip and so my shots were more solid and straight. Kind of in a slump right now but I will just need some practice and we are improving and will get better.”

“These first two tournaments have been challenging but it has been good,” Hall said. “Today’s course was hard. This course will test you and one of our young players shot a 114 so that was amazing for Chloe (Chaney), Overall, it’s great to get back and play with these girls. It has been a long summer and I’m just happy and having fun to play in these unpredictable times.”

Chaney, who scored a birdie on the 9th Hole, scored a 114 with Hunter shooting a score of 135 and Meryn McBrayer rounding out the scoring with a 138.

“We have had some exciting things happen for our younger pliers this week and that is what keeps bringing them back to keep playing. I am expecting to see more birdies and pars from those girls,” Dinwiddie said. “They are excited, having fun and got their first tournament under their belt and they put in some work to get ready for Saturday’s tournament and it showed. Scores dropped down from Monday and I was very excited about that. Our endurance will be tested as we have a tournament at the Bowling Green Country Club on Monday of this week.”