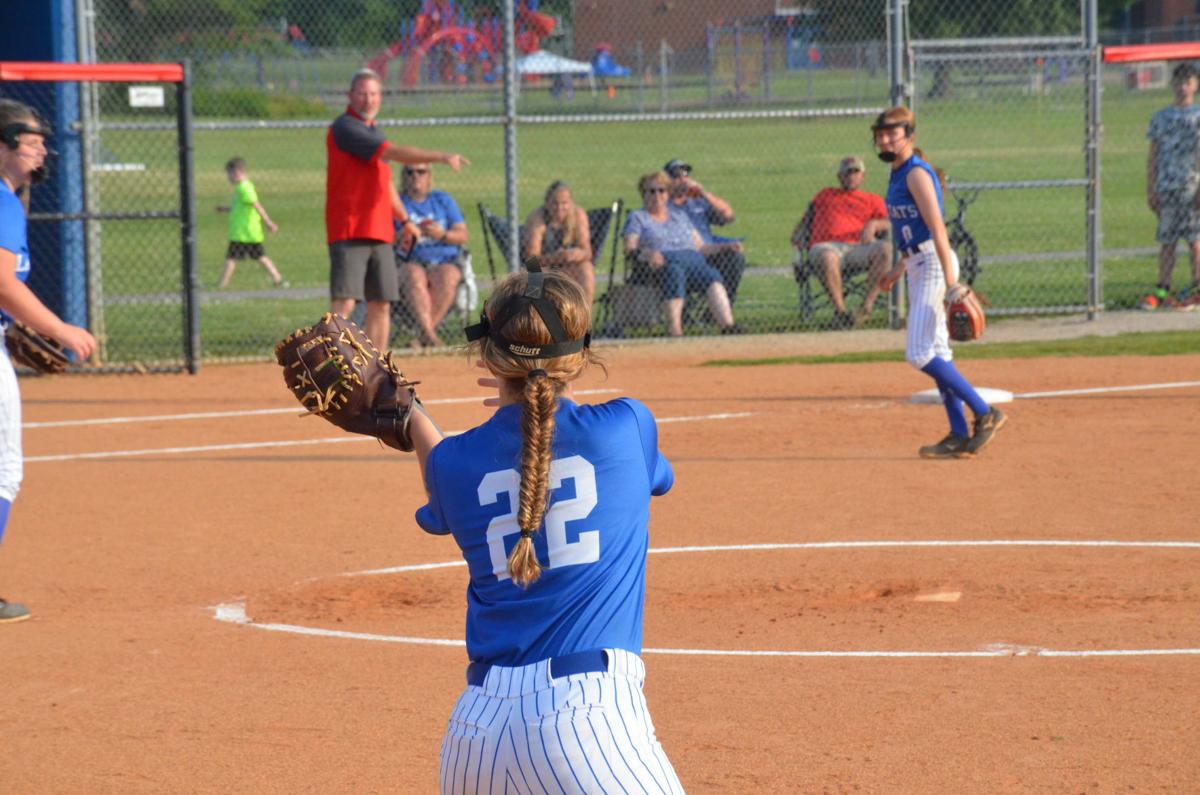 Lady Cats’ eighth grader Allie Utley (0) makes the throw to junior first baseman Shelby Caudill (22) for the out in last week’s game against AC-S at the F-S Soccer and Softball Complex for Senior Night. 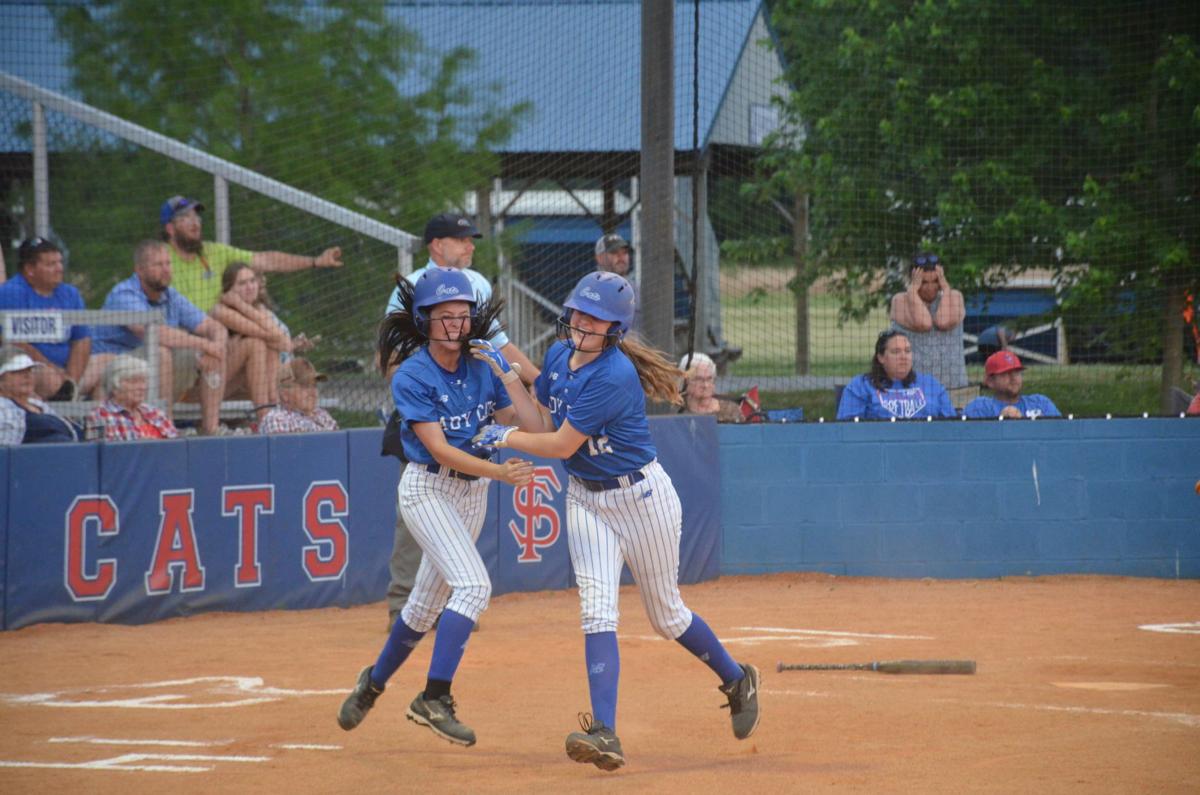 Lady Cats’ eighth grader Allie Utley (0) makes the throw to junior first baseman Shelby Caudill (22) for the out in last week’s game against AC-S at the F-S Soccer and Softball Complex for Senior Night.

Seniors Raegan Coffee, Kaeleigh Tuck and Maddie Utley along with last year’s senior Danyelle Like were all honored before the game.

Freshman Gabi James was the winning pitcher. In relief of starting pitcher, sophomore Hanna Arthur, she pitched the international tie breaker on the 8th inning.

“I am so proud of my team,” Raegan Coffee said. “We worked super hard to get this win tonight for all of the seniors. If we play our best, we know we got this. We have confidence in every single player on this team. We know we can do it, we just got to show it.”

“This was a big win tonight especially on Senior Night,” Maddie Utley said. “I’ve played for seven years for Franklin-Simpson and have enjoyed every moment and not taken anything for granted. Danyelle (Like) lost her senior season because of COVID-19 and I am glad she was honored tonight.”

Trailing 1-0 in the bottom of the 5th with two outs, the Lady Cats found a way to tie the game at 1-1 with junior Sherrekia Kitchens RBI single that scored eighth grader Allie Utley.

A fielding error by Franklin-Simpson led Allen County-Scottsville to score three runs in the top of the 7th for a 4-1 lead.

Playbook learning, on-field competing and … napping? How Packers rookies have benefited from a true offseason

The Lady Cats would not back down in the bottom half of the inning. Back to back singles led to junior Haley Fowler’s RBI double that scored junior Lexi Holleman. Then back to back RBI groundouts by Kitchens and Tuck scored Allie Utley and Fowler, tying the game at 4-4.

Both head coaches agreed to play the international tiebreaker in extra innings. The tiebreaker allows the last player that made the last out in the previous inning to start at second base at the beginning of their portion of an extra inning.

The Lady Patriots scored a run in the top of the 8th for a 5-4 lead. Franklin-Simpson started their bottom half of the inning with eighth grader Jasmine Grover at second. Freshman Zori Stout laid down a sacrifice bunt in the middle of the infield and with an error on the play, Grover scored, tying the game at 5-5. With two outs, Fowler reached base on an error with Stout moving to third. Kitchens was intentionally walked to load the bases for Tuck. With a 2-1 count, she delivered a walk off RBI single to right field that scored Stout for the game winning run for the 6-5 victory.

“My teammates are amazing. They really wanted to pull this win for us seniors. Everybody put everything they had into this game and we got the win because of it,” Kaeleigh ‘Tuck said. “Actually, I wasn’t surprised that they walked Sjerrekia (Kitchens) to let me bat. I was hitless tonight and she had a couple of big hits and they were trying to get a force out at any base. I was given the opportunity and I had to take it and come through.”

Sherrekia Kitchens and Kaeleigh Tuck each had two RBI along with two hits each from Haley Fowler, Kitchens and Allie Utley, who also scored two runs.

“We’ve played 35 games and all of them, maybe except a couple of them, have not been easy. This is the toughest schedule I feel like I have put together and it paid off,” Lady Cats head coach Todd Caudill said. “They were focused for Senior Night and were excited but got off to a slow start. They (AC-S) are a tremendous hitting team. To hold them to five runs is a great accomplishment. Real proud of Hanna (Arthur), our seniors and the team. Couldn’t end no better with (Kaeleigh) Tuck with the game winning hit.”

“I felt like we did not take care of business early by hitting to force some situations to score some runs. We were able to scratch some runs late in the game for a three run lead with our ace on the mound but Franklin-Simpson was not rattled at all as they put together some hits and were able to tie the game,” Lady Patriots head coach Brad Bonds said. “We needed to play the international tiebreaker because we could be in that situation in the postseason. It is something we have not even practiced on so now we will. We told the girls that there are a lot of teachable moments especially in the 8th. This was another moment to get us ready for the postseason.”