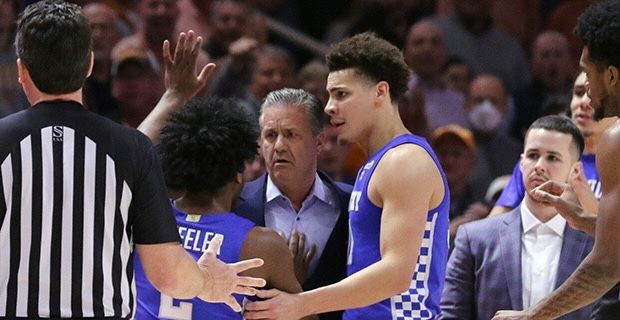 John Calipari is held back from arguing with the officials by Sahvir Wheeler and Kellen Grady Tuesday in Knoxville. 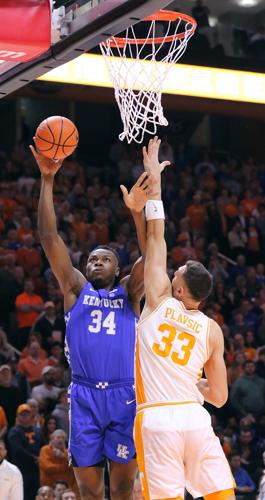 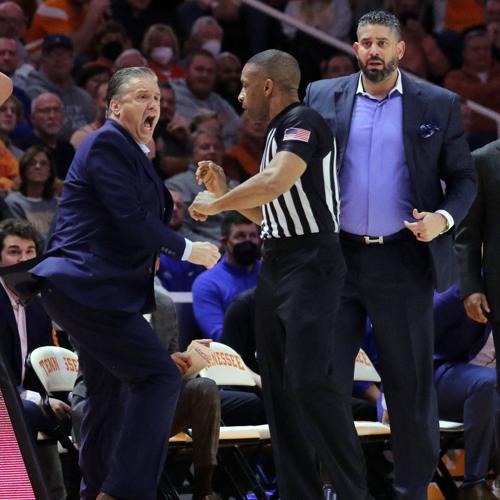 Left: Kentucky coach John Calipari reacts to being whistled for a technical foul early in the Wildcats’ 76-63 loss at Tennessee on Tuesday.

John Calipari is held back from arguing with the officials by Sahvir Wheeler and Kellen Grady Tuesday in Knoxville.

Left: Kentucky coach John Calipari reacts to being whistled for a technical foul early in the Wildcats’ 76-63 loss at Tennessee on Tuesday.

Kentucky’s six-game winning streak came to an end Tuesday as they were defeated 76-63 by the Tennessee Volunteers in Knoxville as they fell to 21-5 on the year and 10-3 in Southeastern Conference play.

The win secured a split of the season series for the Volunteers, who avenged a 107-79 January loss to the Cats at Rupp Arena. Tennessee has yet to be swept by the Cats in Rick Barnes’ tenure as head coach.

Both Tyty Washington and Jacob Toppin played for Kentucky despite Washington leaving Saturday’s win over Florida early with a lower leg injury and Toppin missing the game with a bad ankle.

However, Washington left the game holding his leg early in the second half and punched a chair on the bench in frustration. He did not return to the game.

“If I had to do it over, I would not have played Tyty,” Kentucky head coach John Calipari said postgame. I asked him twice, ‘why don’t you step back?’ He said, ‘I can do this.’ I should have gone with my gut.”

Despite struggling on defense and shooting Oscar Tshiebwe scored 13 points for Kentucky and grabbed 15 rebounds to record his 20th double-double of the season. Toppin and Davion Mintz both added 11 in the loss.

Santiago Vescovi led the Vols with 18 points while Kennedy Chandler added 17. They were joined in double-figures by John Fulkerson and Zakai Zeigler (who both scored 14.

Both teams got off to hot starts offensively as Kentucky jumped out to an 8-2 lead and the Volunteers answered back with a 9-2 run to take an 11-10 lead into the first media timeout.

Two of the points from the Volunteers run came via Santiago Vescovi’s technical free throws after Calipari was called for a tech after arranging an early foul call against Tshiebwe.

With Kentucky up 17-15, things became chippy as Tennessee’s John Fulkerson dived for a loose ball and landed on the Kentucky bench and a scrum broke out with both teams descending on the Wildcats bench.

After play resumed, momentum shifted towards the Volunteers as they pieced together an 8-0 run to take a 23-17 lead into the second media timeout. All eight points on Tennessee’s run came from Chandler.

Tennessee continued to pour it on after the media timeout as they extended their run to 15-1 to take a 30-18 lead and force Kentucky to call timeout. They’d extend their lead to 14 to push their run to 17-1 before Tshiebwe knocked down a pair of free throws to end the run and pull the Cats back within 12 at 32-20.

Following the timeout, the Volunteers continued to dominate as they extended their lead to 37-22 and also watched Tshiebwe pick up his second foul, sending him to the bench.

Kentucky would cut the Vols lead down by one in the final four minutes of the half as Tennessee’s lead sat at 46-32, heading into halftime.

During a 10 minute stretch running from the 13:57 to 3:02 mark, Kentucky was held without a single field goal as all of their points came from the free-throw line. That streak ended with a Mintz 3-pointer.

Things went from bad to worse early in the second half for Kentucky as Washington left the game holding his leg while the Volunteers. Tennessee would extend their lead to 51-34, but the Cats pieced together a 5-0 run highlighted by a Mintz 3-pointer to cut the lead to 12 at 51-39, heading into the first media timeout of the half.

After the break, Kentucky continued to chip away at the lead as they extended their run to 9-0 and pushed the run to 11-2 to cut the lead to 53-45 by the second media stop.

Tennessee regained all momentum after the timeout as they put together a 10-0 run to push the lead to 18 at 63-45 and suck the life out of the Wildcats.

The final eight and a half minutes saw Tennessee extend their lead to as many as 20 at 68-48, but a late Wildcat run made the Vols margin of victory 13.

Kentucky finished the game with 14 turnovers which helped Tennessee cruise their way to revenge.

“They punched us in the both and we didn’t do the same to them,” Calipari said.

“I want to give Tennessee credit for how we played, but it wasn’t one of our best efforts. They just had way more fight than we did.”

The Wildcats will be back in action Saturday when they host No. 25 Alabama at 1:00 p.m. EST. The Cats will look for season sweep of the Crimson Tide as they beat Nate Oats’ squad 66-55 in Tuscaloosa on Feb. 5.

The Cats’ Pause, now in its 46th year covering University of Kentucky sports, is a 72-page glossy magazine published 18 times a year with additional coverage at CatsPause.com. To subscribe to the magazine, visit SHOPCatsPause.com