If you need to purchase a subscription.
You have permission to edit this article.
Edit
Home
News
Opinion
Sports
Obituaries
Entertainment
Lifestyles
Business
Calendar
Classifieds
1 of 6 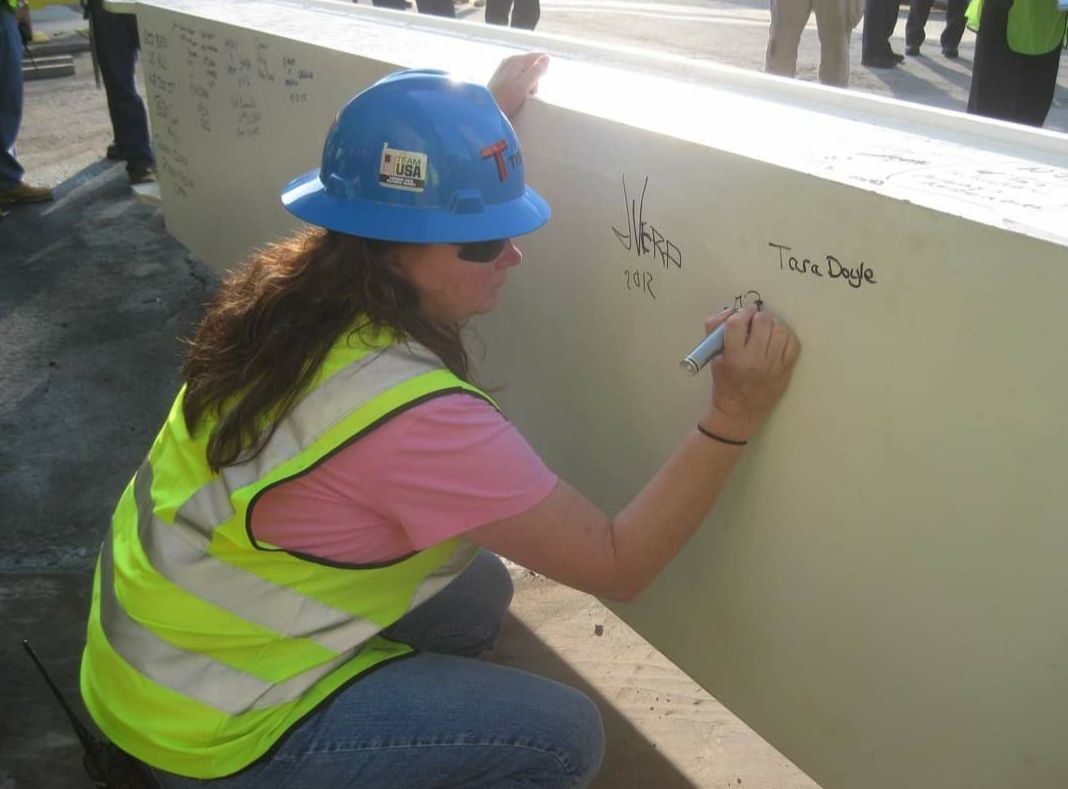 Logan County’s Ginny Schmidt Gipson signs a commemorative beam that was placed at the One World Trade Center in New York. President Barack Obama and First Lady Michelle signed the bean as well. 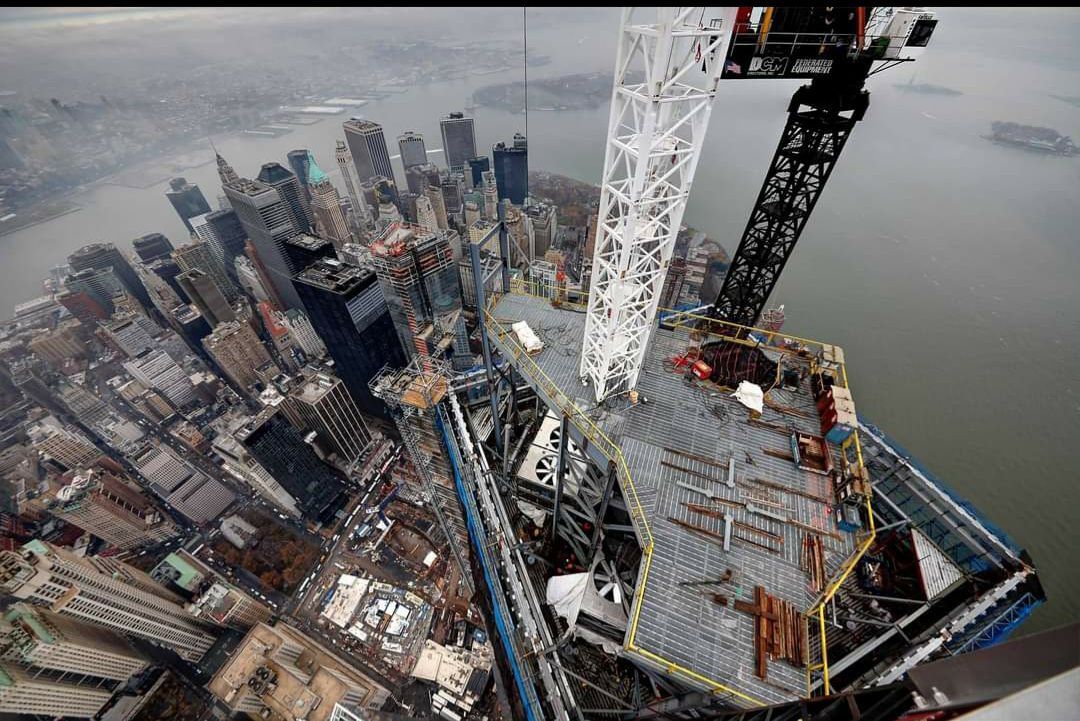 A photograph taken atop the One World Trade Center Complex during construction in Lower Manhattan is shown. 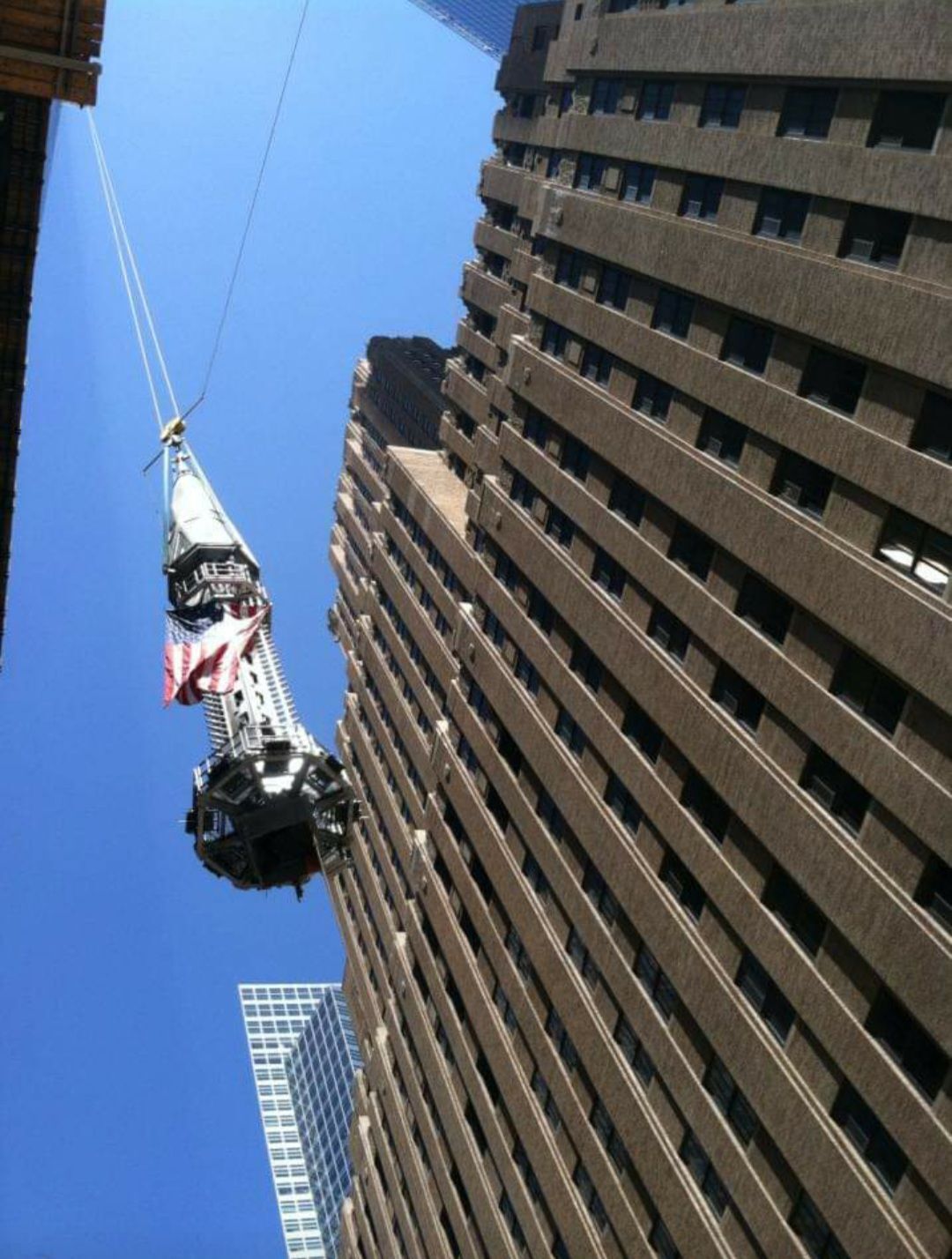 A crane lifts the spire that rests on top of the One World Trade Center. 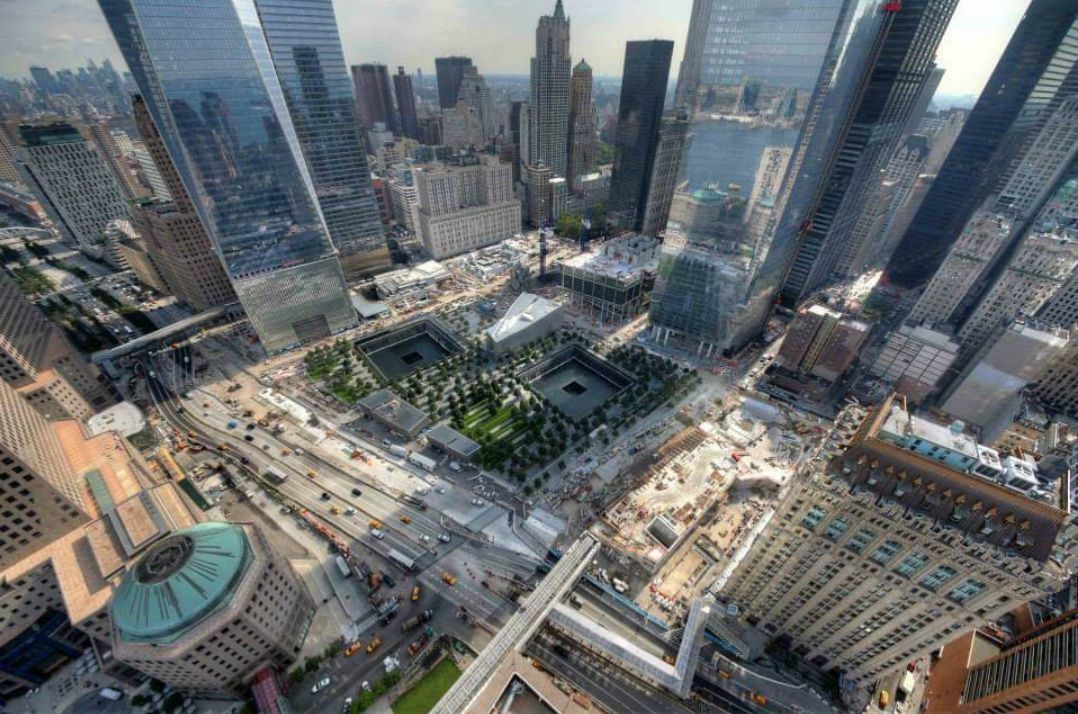 Pictured is the area the World Trade Center towers once stood before being destroyed by terrorists on Sept. 11, 2001. Now, twin waterfall pools can be seen surrounded by bronze parapets that list the names of the victims of the 9/11 attacks and the 1993 World Trade Center bombing. The pools are set within a plaza where more than 400 swamp white oak trees grow. 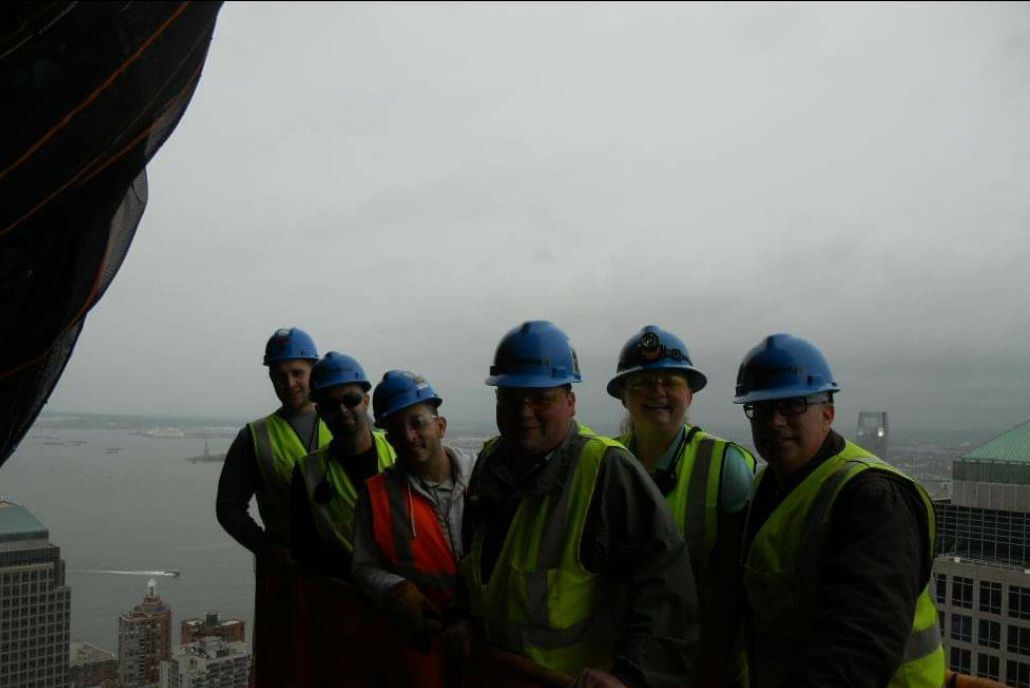 Logan County’s Ginny Schmidt Gipson and her team at the One World Trade Center site. 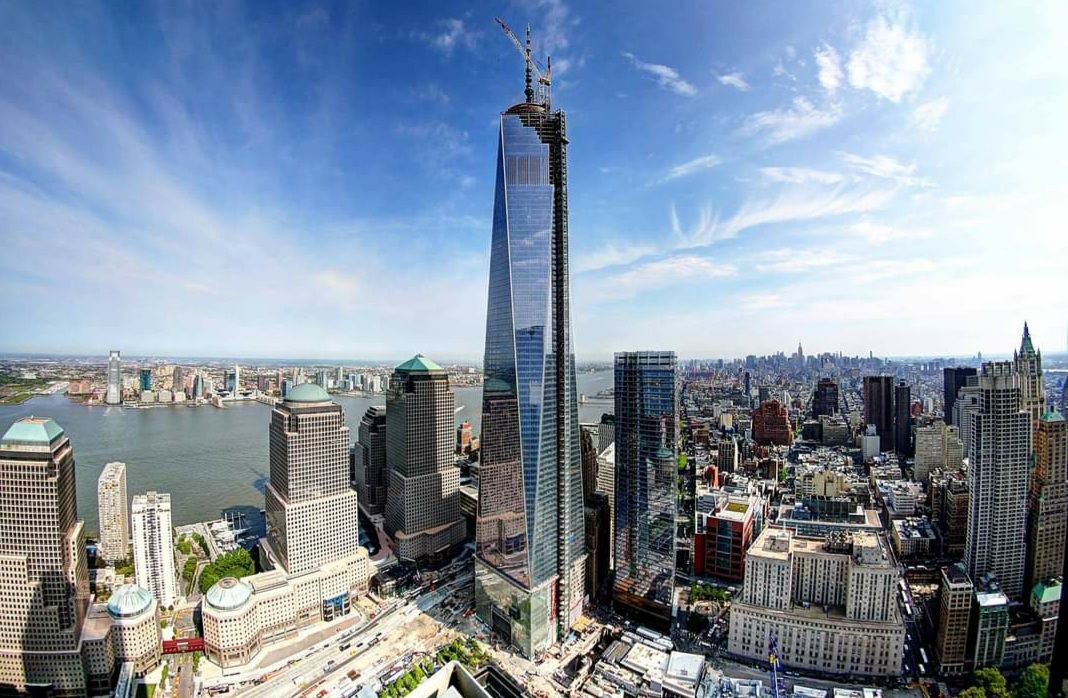 Logan County’s Ginny Schmidt Gipson signs a commemorative beam that was placed at the One World Trade Center in New York. President Barack Obama and First Lady Michelle signed the bean as well.

A photograph taken atop the One World Trade Center Complex during construction in Lower Manhattan is shown.

A crane lifts the spire that rests on top of the One World Trade Center.

Pictured is the area the World Trade Center towers once stood before being destroyed by terrorists on Sept. 11, 2001. Now, twin waterfall pools can be seen surrounded by bronze parapets that list the names of the victims of the 9/11 attacks and the 1993 World Trade Center bombing. The pools are set within a plaza where more than 400 swamp white oak trees grow.

Logan County’s Ginny Schmidt Gipson and her team at the One World Trade Center site.

Where were you on Sept. 11, 2001? Most Americans can answer that question without hesitation, even though it has been 20 years. 20 YEARS! Memories of that day are so vivid and real, it seems it was only yesterday for many of us. The occurrences of that day were so overwhelming, so horrific, so devastating, it seemed the destruction and pain would never end.

A plan was birthed from the ashes, though, to construct a beautiful building that would give homage and honor to all of those who were lost on that fateful day. For those of us in Logan County, Ky., we were unaware that one of our own would have an integral part in its construction.

We must go back to where it began. Soon after graduating from Logan County High School, Ginny Schmidt Gipson happened to befriend a “crew” of carpenters in Texas in the mid-1990s. They introduced her to the art of framing houses, and she is grateful to them. She explains, “Great men of knowledge taught me my job.” After a year and a half, she had an opportunity to relocate to Arizona and soon applied to work on a a construction project. She has since traveled around America and the world as a project safety manager for several buildings and skyscrapers, including the Y-12 Government Buildings in Oak Ridge, Tenn., and the new University of Kentucky Hospital in Lexington.

Ginny had returned to America in late August 2001 from working in Tianjin, China to surprise her parents, Steve and Marilyn Williams of Russellville, Ky. She was scheduled to fly to Arizona the afternoon of Sept. 11, 2001, but saw with her mother, news of the first then second plane crash into the Twin Towers in New York City, the third into the Pentagon, and then the fourth into a field in Shanksville, Penn. They watched together in disbelief as the tragedy unfolded before them. All flights were immediately canceled because of the possibility of more attacks. With the uncertainty of the future and public transportation being suspended, Ginny called her rental car company and they amazingly allowed her to drive a car to Arizona. She recalls seeing people waving American flags along roadsides and overpasses across Tennessee, Arkansas, and Oklahoma. “People were gathered at churches and even in parking lots and truck stops praying and crying. Everyone seemed lost, looking for answers that were not to be found.”

She did not know anyone personally that was killed on that day, but she had no idea how her life would soon intertwine with many people who did lose loved ones that morning. Ginny says, “I have met many first responders and employees that, for one reason or the other, did not go to work that day and we’re left wondering why?”

Fast forward nearly nine years to May of 2010. Ginny finds herself in New York City for the first time, surrounded by an amazing team of co-workers and contractors who all have the same goal: to build Freedom Tower. This project was a little different than most, all visitors and workers must obtain high-security access. Homeland Security would perform a scrupulous background check of each individual and ensure their badge matched the retinal scan before the person was allowed onto the property.

Ginny was one of a team of seven safety managers to be a visual, sometimes verbal, reminder for the crew to always be safety-minded. Her employer, Tishman Construction, a top-three Construction Management company in New York, had managed the construction of the original Twin Towers and other World Trade buildings. Tishman was requested to return to manage the New World Trade Building Site Construction of several projects which included The Freedom Tower, One World Trade Center. Everyone involved with this project knew its importance. She explained, “Five construction men came out of or delayed their retirement to be a part of it because they built the original Towers.”

Ginny feels at home among the steel beams, cranes, and dizzying heights and says, “I am very respectful of the area and the environment when I am at heights. Winds can be calm down on the sidewalk but severe near the top of the skyscrapers.” She also grew accustomed to the subway, crowds, and city cuisine, though sometimes she longed for her mother’s fried chicken livers and a chance to ride a back country road in a pick-up truck. Occasionally she would look to the southwestern skies and think of friends or family in Kentucky.

She was honored to have been present during the Moment of Silence on Sept. 11, 2011, one decade after 2,977 people lost their lives. Ginny described the scene:

“All work stopped. American flags were draped everywhere, including large flags hanging from the booms of the Tower cranes. The cranes swung around to point their booms toward the Memorial Pools that opened that Sunday. The cranes sounded their horns together, and every person present removed their hard hats and bowed their heads together in respect, reflection, and prayer.”

In June of 2012, President Obama and First Lady Michelle signed a commemorative beam that was to be a permanent part of the structure. Ginny also had a chance to sign this very special, very important beam. She remembers that day. “It was such a moment of reflection, but also a moment for me to send a picture to my friends, family, and past co-workers that supported me throughout my life and for choosing construction as my career.” That beam was installed on Aug. 2, 2012. Ginny was on the ground the day it was installed, doing her job, ensuring safety as the beam was lifted in place.

Ginny was also safety manager on the ground as the “Spire” was lifted to the very top of the World Trade Center Tower. This process actually took a couple of weeks as sections of the spire had to be brought in through the Hudson Bay then slowly carried by large machinery through the city for only two to three hours each day in the very early morning to minimize traffic disruptions. The sections were hoisted to the “top of the house,” which is what construction workers call the top floor of any tall building, and secured carefully to the roof. Each time a section is lifted, the area on the ground must be safe for the workers and for the public or press who wish to watch or take pictures. Ginny states, “Later, I was assigned to the Spire installation. Every day I transitioned between hoists, stairs, and elevator shafts to get to the roof on the 105th floor, then climb up an additional 400-foot scaffolding to help the workers and ensure safety protocols were followed.”

Ginny is grateful to have had the opportunity to work on the Freedom Tower. “I have learned the world truly is a big place with amazing opportunities to grab and accomplish.” She will never forget her time working in New York City, but mostly she says she will not forget the people. “The crew treated each other like family.” She met some very talented, dedicated individuals who worked tirelessly through snow, rain, and heat to construct this magnificent building. “The Freedom Tower is not only 105 floors above ground, but there are four floors under the ground. These actually tie into the underground subway system of the city. When Hurricane Sandy came through, the bottom fourth floor (B4) completely flooded as did part of B3. “Sea turtles and fish were swimming through those below ground level floors. It took almost two weeks to get all of that cleared out.”

Ginny is back in Logan County for the time being working on a large project in Warren County. She enjoys her time at home with her family and plans to get together with as many friends as she can before the next project leads her to more travels. She is passionate about safety. She instructs and certifies people to work from heights and operate equipment. “I also train people to be trainers.”

Ginny is thankful to have been able to find something that she enjoys doing. “I did not go to college. I went to Lewisburg Elementary and Logan County High. College is important for some careers, like engineering or nursing, but it is not the only way to have a successful career. Electricians, ironworkers, the guy who pushes a broom that sweeps the floor to keep it clean so it is safe for the workers to walk around with heavy materials in their hands, they are just as important as the engineers and contractors.”

One thing is for sure, Logan County, Ky. is very proud of this county girl from “Gravel Town” in North Logan who made her mark, literally, on one of the most important buildings in America; a building that was erected to bring hope from disaster and beauty from ashes.

This is not an official statement from Tishman an AECOM Company, The Port Authority, or Silverstein Properties.