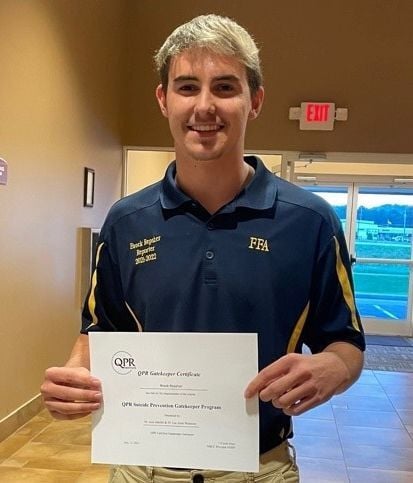 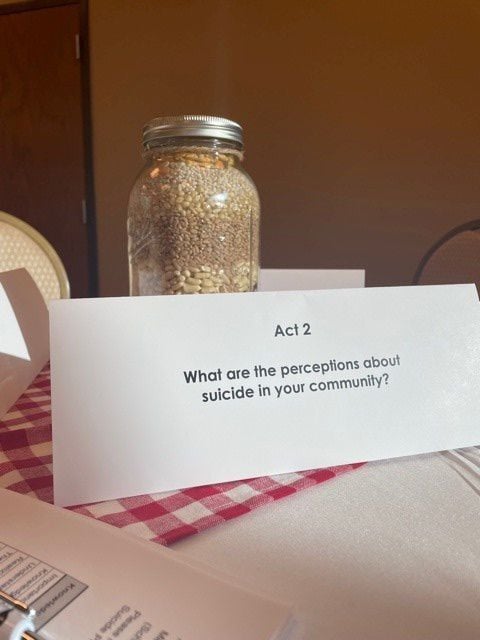 Bring awareness to mental health in the farming community, several in the agriculture field sponsored a Farmer’s Dinner Theater.

Bring awareness to mental health in the farming community, several in the agriculture field sponsored a Farmer’s Dinner Theater.

On July 15, an event was held at the Logan County Extension Office to bring awareness to mental health for the farming community. BARN (Bringing Awareness to Right Now) to Mental Health and Wellness was a joint effort with the Logan and Warren County Extension Offices. A partnership was formed with the University of Kentucky College of Agriculture and Environment, the University of Kentucky College of Nursing, the Future of Nursing Campaign for Action, the Kentucky Beef Council, Kentucky Nurses Action Coalition, and Brother’s Run.

The Farmer’s Dinner Theater, as the event was called, included information tables with Lifeskills, a community mental health center serving over 10 counties in Kentucky, including a Logan Service Center on Shelton Lane, the Health Department, and Logan Memorial Hospital. These entities are the first lines of defense for local people struggling with mental health issues. In farming, there are common stressors that can lead to anxiety and depression. The goal of the event was to bring awareness and normalize conversations about mental health.

Jennifer Hudson, with the UK Family and Consumer Science Department, was one of the organizers of the event. She shared that the Farmer’s Dinner Theater was possible through a grant the university had received. It was modeled after a program developed by the Cattleman’s Association that first addressed issues of safety in farming. “The goal is to normalize mental health conversations and to help bring awareness. There needs to be an open dialogue.” The farming community deals with unique stressors that can affect mental health. Some of these include handling livestock, sick livestock, planting and harvesting seasons, equipment breakdown, and even something completely out of one’s control…the weather.

The highlights of the evening included a three-act play performed by 4-H and the Future Farmers of America students from Logan and Warren County. The students wrote the script, designed the set, served as ushers, and performed public relations duties. The play reenacted scenarios farming families might encounter in everyday life. The students also learned a valuable tool to prevent suicide.

Students became certified in QPR over the course of their practices. QPR is kind of like CPR, but it is for suicide prevention. QPR stands for Question, Persuade, and Refer. If one is speaking to a person voicing suicidal ideation, one asks tough questions. This could include, “Do you ever feel like not waking up in the morning, do you have a plan to complete suicide, and do you have a time frame that you feel you would try to complete suicide?” If any of these answers bring alarm, one Persuades the person to stay with you or on the phone until the final step which is Refer. One either takes the person to Logan Memorial Hospital’s emergency room or calls 911. Students were presented with certificates showing they were QPR educated.

Logan County High School student Brock Repsher, who was part of the public relations for the play, said, “It was a diverse group sharing the same goal.”

Julie Marfell, Associate Professor of the College of Nursing at UK spoke highly of the students’ efforts and the goals the College of Nursing has as care leaders. “These youth were so attentive and so engaged. They really soaked up the information. We educate our nurses about how stress affects mental health”.

Signs of anxiety and depression in farmers include worry or fear about the future, avoidance of certain activities like paying a bill or machinery maintenance, feeling overwhelmed and not attending social gatherings, and low frustration tolerance. This can cause conflict within families. These things were reenacted in the students’ play. The most important message was to have those difficult conversations. Within the farming community there are unavoidable stressors but reaching out for help should come without stigma.

If you or someone you know is in a mental health crisis, please go to the local Logan Memorial Hospital Emergency Room or call 911 if necessary. If it is not an immediate emergency, one may call 270-901-5000 to reach out to someone at Lifeskills and to schedule an appointment with a therapist or doctor. The National Suicide Prevention Hotline is 1-800-273-TALK.