If you need to purchase a subscription.
You have permission to edit this article.
Edit
Home
News
Opinion
Sports
Obituaries
Entertainment
Lifestyles
Business
Calendar
Classifieds
1 of 13

Russellville fans drove over three hours to cheer on their team at the 2021 UK Orthopaedics State Football Finals. 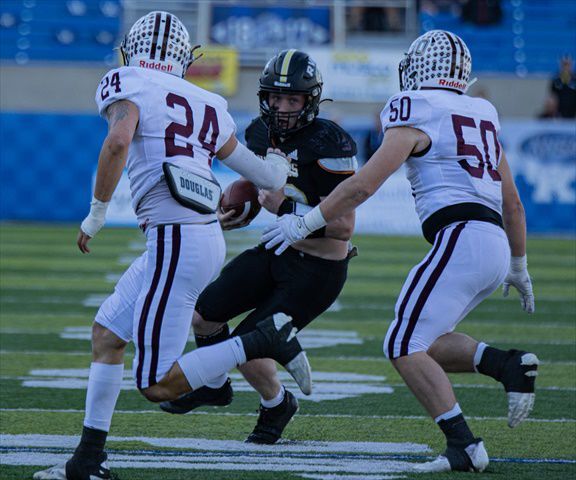 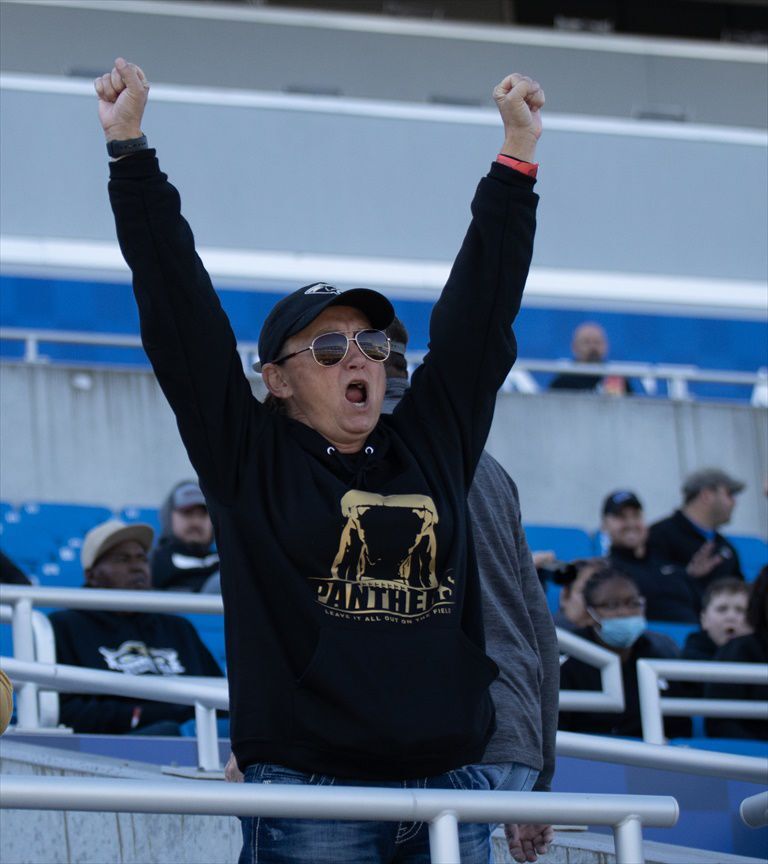 Photo by Timothy Bollenbecker Fans cheer on their Panthers. 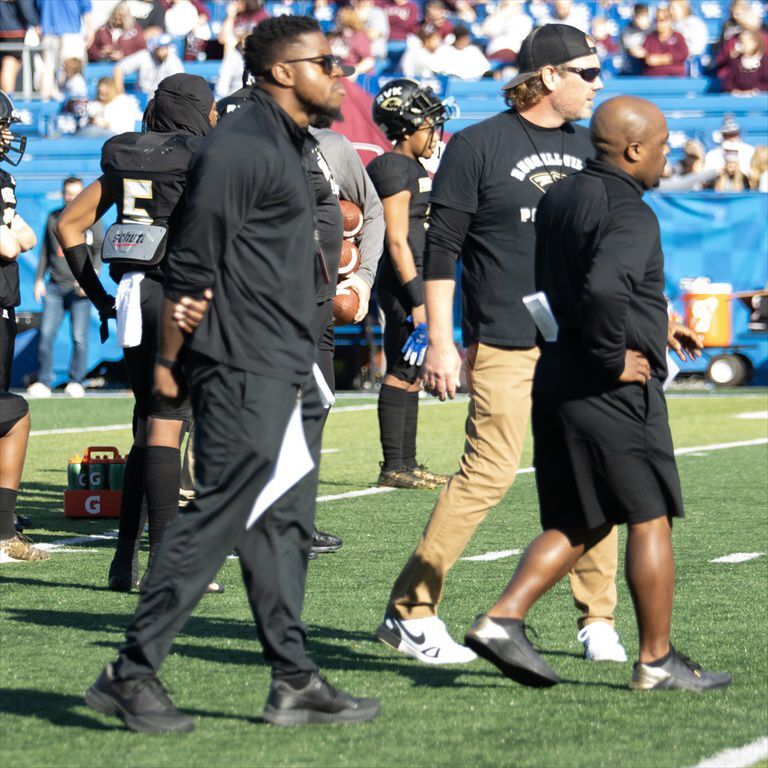 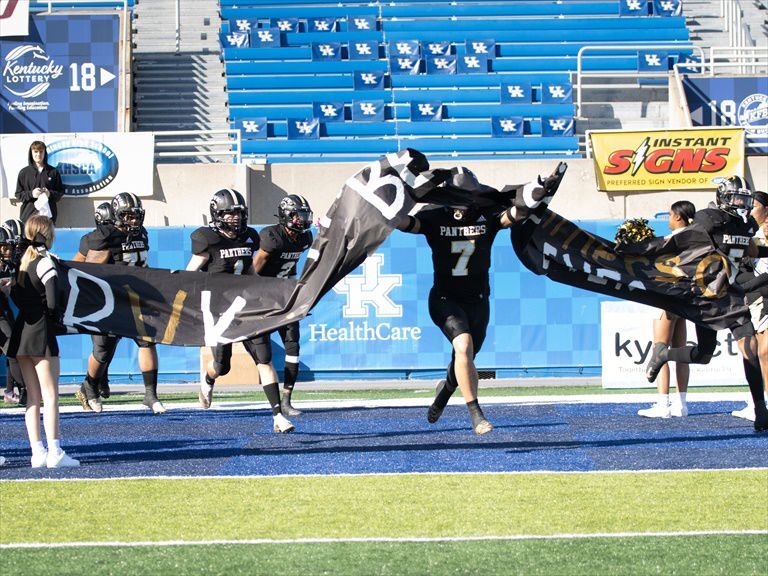 Panther players bust out of the gate during the 2021 UK Orthopaedics State Football Finals. 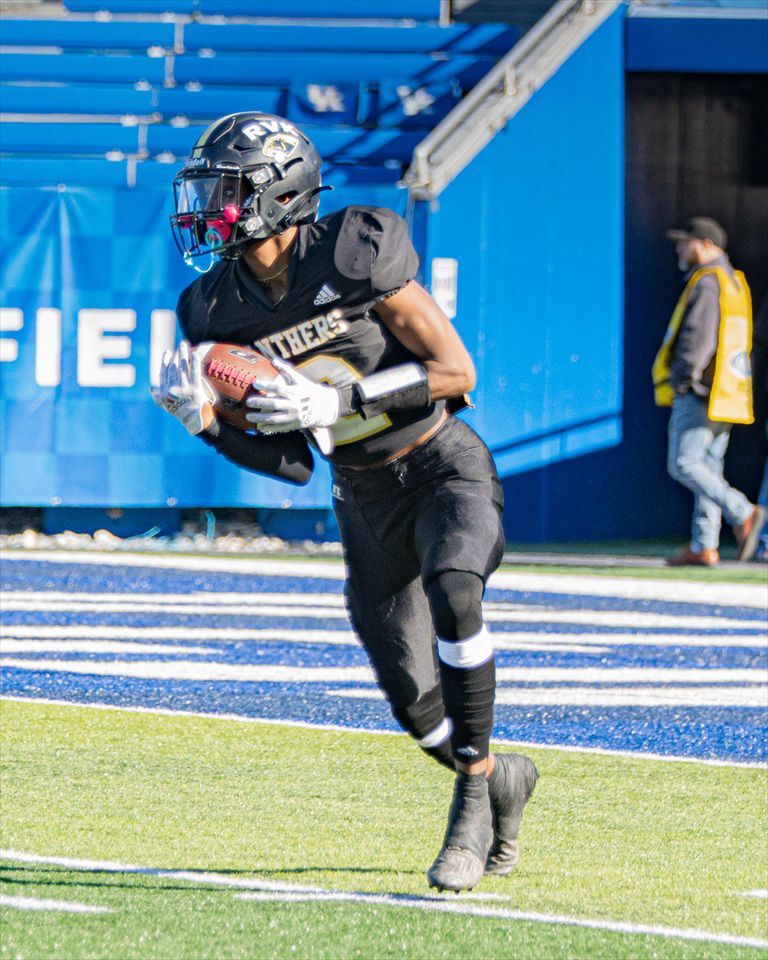 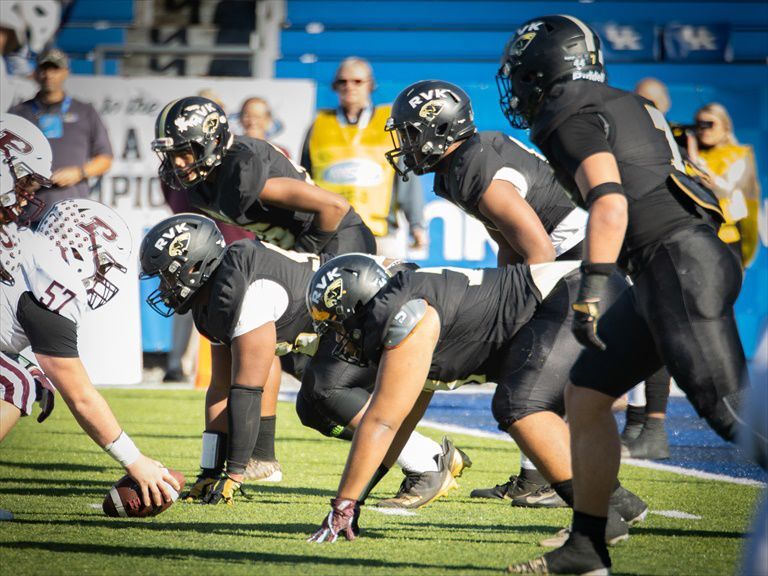 At the line, the Panther defense prepares to hold back Pikeville. 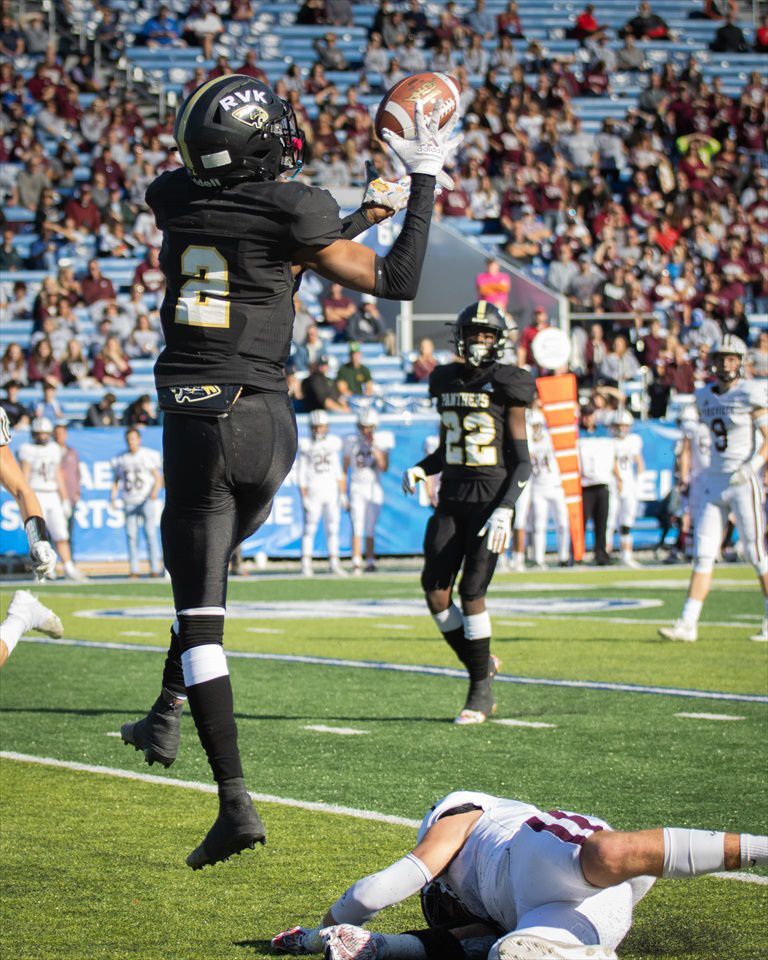 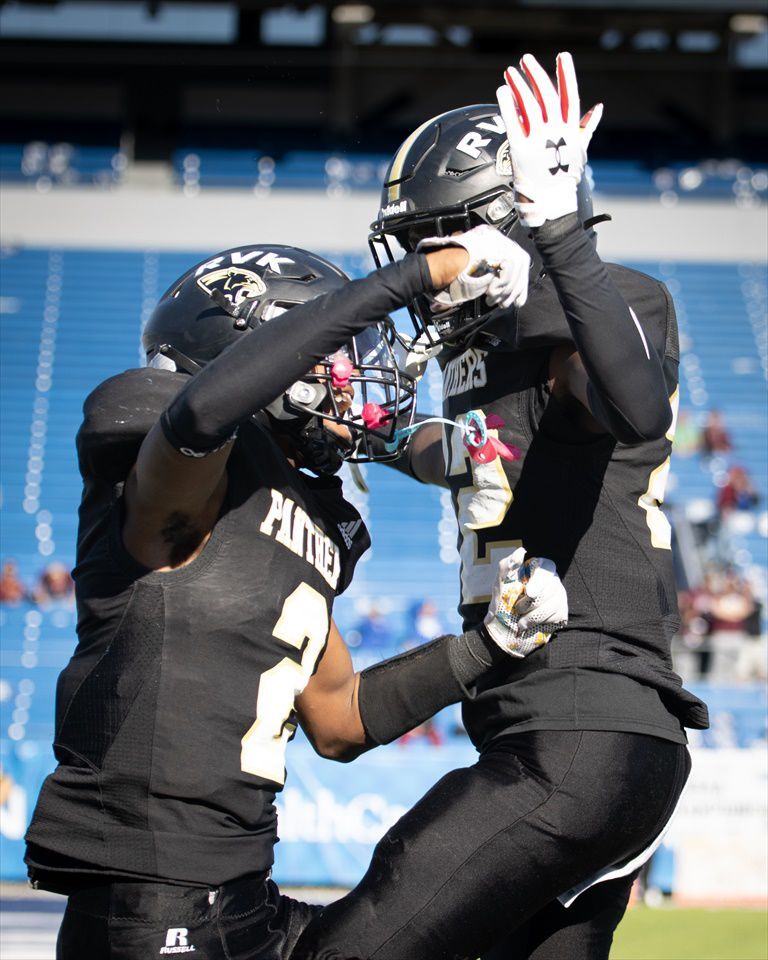 Photo by Timothy Bollenbecker Fist bumping Panthers take pride in the job they did at the 2021 UK Orthopaedics State Football Finals. 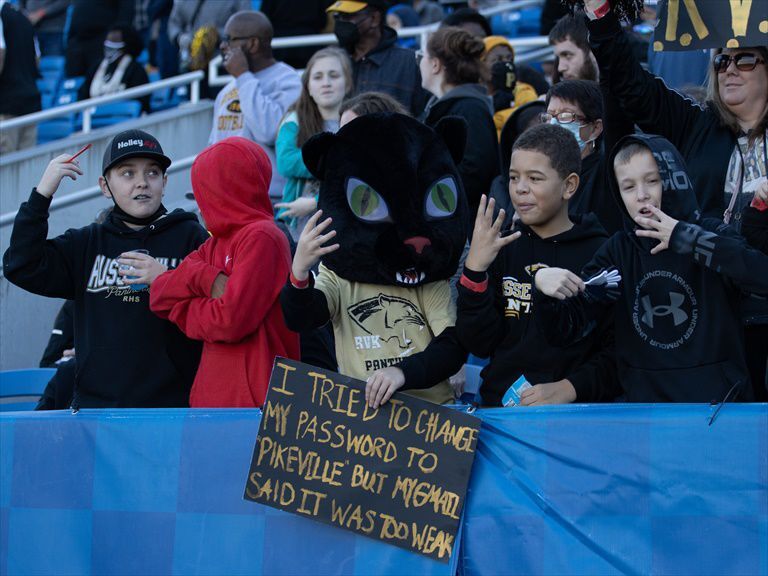 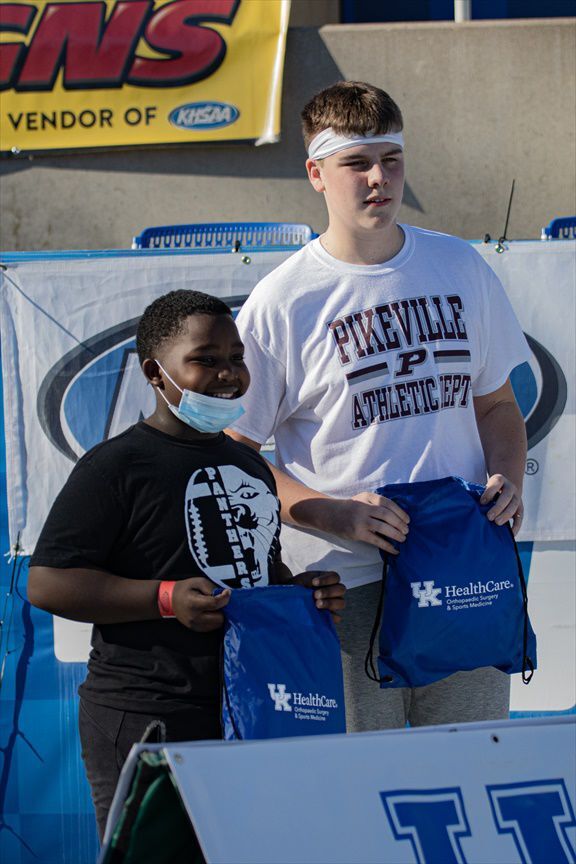 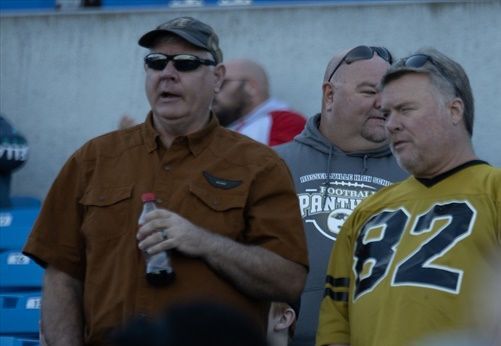 Russellville fans drove over three hours to cheer on their team at the 2021 UK Orthopaedics State Football Finals.

Photo by Timothy Bollenbecker Fans cheer on their Panthers.

Panther players bust out of the gate during the 2021 UK Orthopaedics State Football Finals.

At the line, the Panther defense prepares to hold back Pikeville.

Photo by Timothy Bollenbecker Fist bumping Panthers take pride in the job they did at the 2021 UK Orthopaedics State Football Finals.

The last time that a team from Russellville, Ky. stepped onto a football field for a state championship game before last Friday was Nov. 30th, 1990. The big game was held at Cardinal Stadium in front of a reported 3,750 fans. The Panthers were tied with Bellevue at the half with seven points each before Russellville scored 14 unanswered in the second half to win 21-7.

Friday, Dec. 3, 2021, ended the long drought of state championship appearances by the Panthers. Coach Mikie Benton marched his team out onto Kroger Field in Lexington to face the Pikeville Panthers in front of 5,187 fans.

Pikeville drew first blood in a high-scoring first quarter between the two Class 1A powerhouses. The Pikeville star running back, Birchfield found a gap and slipped into the end zone for a 3-yard score. The kick after failed and Pikeville led 6-0 with 5:33 to go in the opening frame.

Russellville struck back with a fantastic 63-yards run by Jaquis Todd. The game was tied at six after another failed extra point with 4:32 to go in the quarter. Birchfield once again found the end zone for Pikeville on the next possession. It was 13-6 with 3:28 on the clock in the first.

Sticking to the schedule of trading touchdowns with each elapsed minute on the game clock, Russellville’s Lennon Ries found Rooster Woodard for a touchdown with 2:25 left in the wild opening quarter at Kroger Field. After the kick by Dustin Brown, it was tied at 13 each.

The Pikeville Panthers went up 20-13 after a 52-yard pass and extra point. Early in the second quarter, Pikeville added another seven points to pad the lead at 27-13. Both defenses started to settle down in the second and held each opposing team out of the end zone until Pikeville’s Aaron Chang kicked a 23-yard field goal with 23 seconds left in the half. Pikeville led Russellville 30-13.

The momentum of the game shifted unexpectedly just before going into the locker room. Chevis Elliott had a huge kickoff return to the Pikeville 4-yards line. Jovari Gamble then threw a touchdown pass to Rooster Woodard with no time left in the half. Brown added the extra point and the Panthers went to the locker room down by a manageable ten at 30-20.

Coming out of the break, the Russellville defense turned up the intensity and stopped the Pikeville Panthers from finding the goal line for the remainder of the game. Russellville scored on a 46-yard Jaquis Todd run with 9:21 left in the 3rd. The score was 30-27. Unfortunately, as the Russellville defense held, so did Pikeville’s. Neither team was able to score again in the game and it would end with a final of 30-27.

Ries threw for 97 yards and a score. Jovari Gamble also threw his first touchdown pass of the year on a trick play to close out the half.

Rooster Woodard caught both touchdown passes for Russellville. He had 83 yards receiving in the game. Jackson Hampton finished with 17 yards.

Russellville fought hard in Lexington. Coach Benton’s Panthers fought hard all season. The Panthers finish the year with a record of (12-2) and the first trip to the state championship game in 31 years.