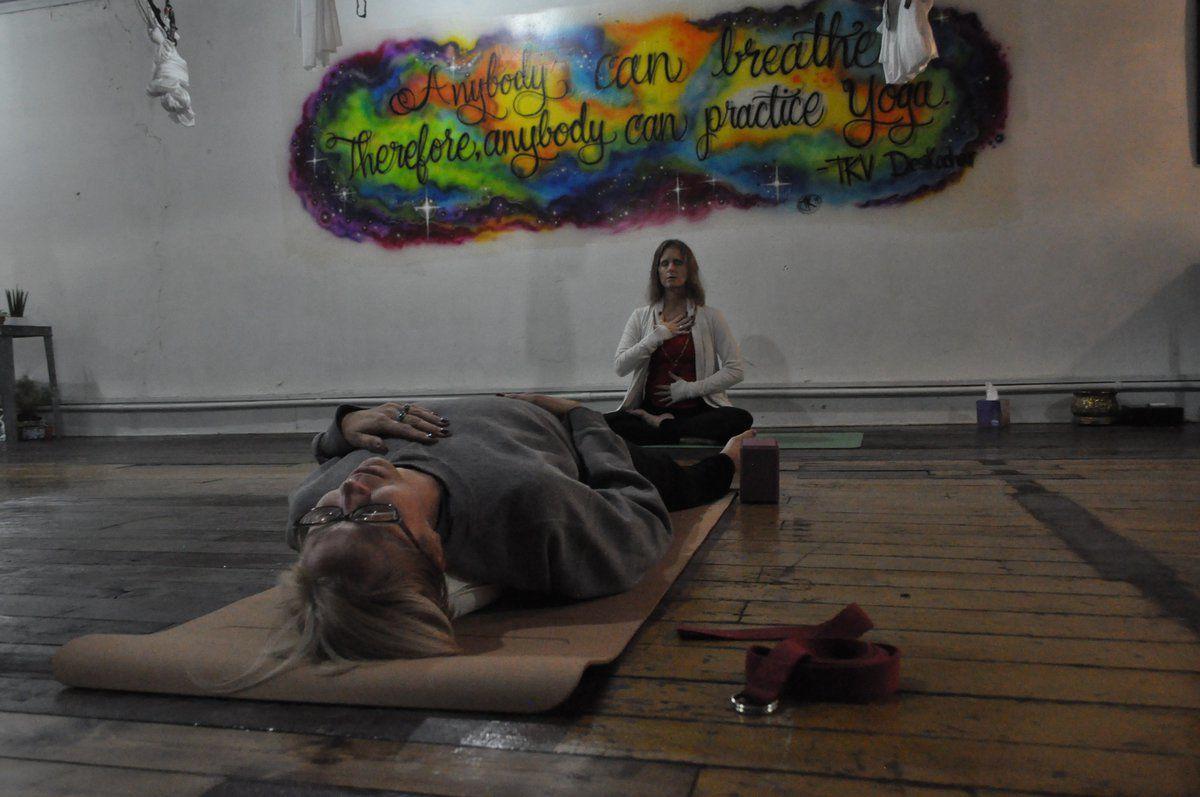 Janet Eaton lays on the floor in a relaxed position as yogi, Tj Tate, owner of Life Flow Yoga, talks her through the movements during the rest and relaxation lunch time class on November 18. 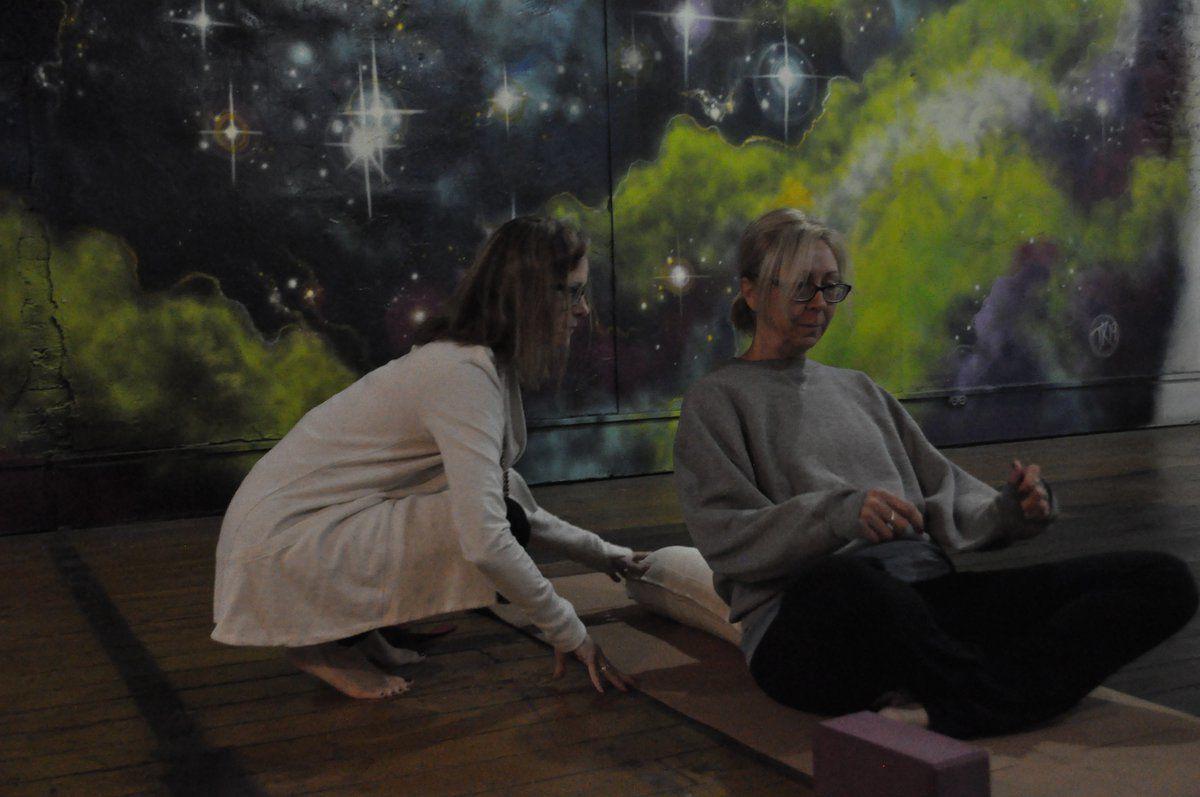 Tj Tate (left), owner of Life Flow Yoga, above Wildflower Boutique on Main Street, helps Janet Eaton with the positions for her first yoga class in front of the mural painted by local tattoo artist Thomas Kennedy with Dark Theory.

Janet Eaton lays on the floor in a relaxed position as yogi, Tj Tate, owner of Life Flow Yoga, talks her through the movements during the rest and relaxation lunch time class on November 18.

Tj Tate (left), owner of Life Flow Yoga, above Wildflower Boutique on Main Street, helps Janet Eaton with the positions for her first yoga class in front of the mural painted by local tattoo artist Thomas Kennedy with Dark Theory.

When walking up the stairs to Life Flow Yoga studio, visitors are greeted by silks hanging from the ceiling waiting to be unrolled for an aerial class -- a quote by T.K.V. Desikachar about yoga painted in various colors on the right wall and a beautiful blue velvet bench sitting in front of a wall of mirrors to the right of the door where guests can sit down and remove their shoes.

Before a class begins Tj Tate, owner of Life Flow Yoga studio, "cleanses" each student with Palo Santo, a clearing energy wood from Peru, to welcome creativity, love and good fortune into the space.

Janet Eaton attended her very first yoga class at the studio on Nov. 18. She chose the rest and restore lunchtime class because she was feeling tight-muscled.

"I feel much more relaxed and my muscles feel relaxed so I would highly recommend [the class], and I can't wait for my next one," Eaton said.

"Last week we called it a soft opening since we had a lot of things going on," Tate said.

She started her "yoga life" in 1994 in Nashville working at Lightning 100 WRLT radio station when she needed an outlet. Next door to the station was a yoga studio and that was her introduction to the exercise.

hardcore," Tate said. "I kind of got the bug and I loved it."

Later on in the 90s she moved to California, where the practice of yoga was abundant. She practiced yoga on the grass, on the beach, in studios, everywhere a person could do yoga -- she said she even played around with teaching yoga before certifications were required.

She started thinking about moving to Franklin a few years ago, where her parents have lived for 20 years, and about seven years ago it became just her mom. A couple years ago, she started talking to Amy Ellis, of Franklin-Simpson Renaissance, about renting a space on the square.

Tate said she was actually getting her hair done at Wildflower Boutique when she asked Janet Eaton what was on the top floor.

Tate said she talked to Stephanie McMillin, who is a makeup artist, lash stylist and licensed nail technician, who rented the top floor of Wildflower, to ask if they could share the space.

"Stephanie has a beautiful space and I was hoping mine would complement hers with the white of the Ariel silks and the white of her space and I think it all just flows," Tate said. "It took a couple of years, but for me it is a life long dream to have this studio and it landed here so I always look at it as the universe opened this window."

She said she is working on her health coach certificate training and should have that completed by the spring. Health coaching is not just teaching how to eat differently, but how people can live differently through lifestyle changes, she added.

She said she tried to create classes that meet everyone's needs by offering vinyasa classes, slow vinyasa classes, there is a rest and restore class for the lunch crowd and she offers aerial yoga.

"It is fabulous, you slip into this silk hammock that is all white and it just envelops you," Tate said.

Her goal for the studio is to make it very community oriented by offering classes to kids after school on Mondays and Wednesdays. She is hoping to eventually add mommy and me yoga classes on Sundays.

"I want people to feel like anybody can come, we have those intro to yoga classes so if you have never stepped in a yoga class, but you have a lot of yoga pants lets put them to some good use other than they are really comfortable and see what it is about," Tate said. "See where you have places in your body where you need to move or just get some breath in your body and yoga can do all of that."

Her signs for the business came from a local sign shop and t-shirts from a t-shirt company in town. She even collaborated with Thomas Kennedy, owner of Dark Theory, to paint the two murals inside the studio.

The murals on are on opposite sides of the room that are visible walking into the studio. Kennedy said he was able to complete both pieces within two nights, working on each one on a different night.

"She had a reference picture of something with the ideas, something she was going for, so I just used similar colors and just did it in my style," Kennedy said.

The idea was something really colorful and inspirational, but nothing too crazy for the universe themed mural, he said. For the quote mural he worked with tie dye colors as a theme.

"I like doing artwork and I like spirituality and yoga and stuff like that," Kennedy said. "It was a cool project. I think they turned out good."

Tate said she hopes to connect with other local yoga studios and teachers to create a yoga community. She said she would love to have other local "yogis" come teach at her studio and vice versa.

There are a couple of teachers coming from the Cornerstone of the Presbyterian Church that will teach similar classes at Life Flow Yoga, including Carla Phillips and Francis Strickler.

"They had some students who were really excited about having a full fledge studio here that offered a wide variety of classes, days and times and a lot of those students are transferring over here," Tate said.

She is also reaching out to yogi friends of hers from all over the country to ask if they want to teach a class or two at her studio.

"I know people are putting trust in Wildflower and Janet, but also in me and so I don't take that lightly and I appreciate people growing with us because I know we will have some growing pains," Tate said. "Bare with me because I am a one woman show who really wants to do the studio and the community proud because I just feel blessed to be here."

She said she provides mats, blocks, rugs and straps for the classes, all she asks students to bring are water bottles and a towel to use as needed.

On Dec. 11, she is offering a full moon flow class to help people understand the different energies the full moon emerges. Tate said she is also hoping to do a 30-day yoga challenge in the new year, offering prizes and random drawings.

For more information about Life Flow Yoga, visit her Facebook page https://www.facebook.com/fishfulyogi/ or her website www.lifeflow.yoga for pricing options. Tate said anyone interested can call or text her, at 904-669-8894.