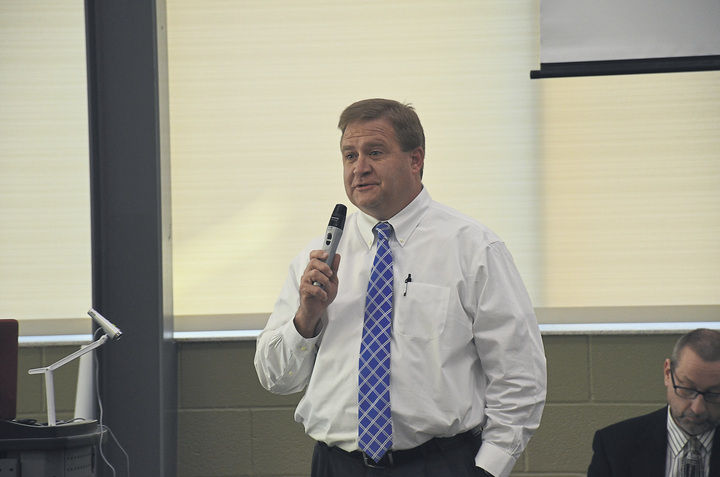 Franklin-Simpson High School principal Tim Schlosser speaks on a new pre-student teaching program at the P-16 Council meeting last week. There are 16 potential English and history teachers participating in the program this year at FSHS, according to Schlosser, who said it has been a great partnership with Western Kentucky University. 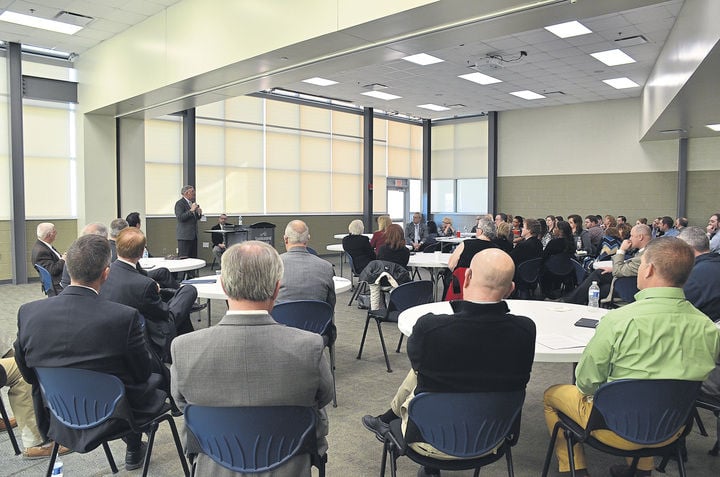 State Rep. Wilson Stone speaks to community leaders, educational administrators from around the region and fellow state representatives last week at Southcentral Kentucky Community & Technical College during P-16 Council meeting. He commended those present in the education field for their efforts.

Franklin-Simpson High School principal Tim Schlosser speaks on a new pre-student teaching program at the P-16 Council meeting last week. There are 16 potential English and history teachers participating in the program this year at FSHS, according to Schlosser, who said it has been a great partnership with Western Kentucky University.

State Rep. Wilson Stone speaks to community leaders, educational administrators from around the region and fellow state representatives last week at Southcentral Kentucky Community & Technical College during P-16 Council meeting. He commended those present in the education field for their efforts.

Though the idea might resonate more with adults, computer skills could be classified as a foreign language for students in Kentucky classrooms in the future.

Sponsored by Givens, the bill would allow computer programming language courses to be accepted as meeting foreign language requirements in public schools.

"I am here to rally you to support Senate Bill 16," he said. "If you've got a math teacher who is credentialed to teach computers, you may not have to get a foreign language teacher."

The bill passed through the Senate last year, but not the House. It has again been introduced to the Kentucky General Assembly.

Givens was joined by several other state representatives, as well as community and educational leaders from across the region at the Barren River area P-16 Council Meeting at SKYCTC.

Four other state legislators from the surrounding area spoke at the event, and each used the opportunity to discuss education measures being considered in the present legislative session, which will conclude Mar. 24.

Jody Richards, Speaker Pro Tem of the Kentucky House representing the 20th District, said the House will focus on the issues of voting rights and increased broadband access in the current legislative session.

Senator Mike Wilson of District 32 applauded Simpson County for its industrial development over the last several years. He also discussed Senate Bill 3, which he said will pass this week. Known as the AT&T bill, SB 3 allows all Kentuckians access to unlimited calls within the local exchange area, 911 emergency service and the ability to interconnect with other exchanges.

"I hear constantly from schools that we need more broadband, and I think this will help us get it," he said.

He also discussed two bills which have already passed through the Senate this legislative session. Senate Bill 1, which has been coined the ‘Kentucky Right to Work Act,' will allow individuals to work at unionized shops without paying dues to an organized labor group. Senate Bill 5 will provide more treatment for heroin abusers while increasing penalties for dealers.

Representative Wilson Stone of the House District 22, which includes Simpson County, lauded the educators present for their efforts.

"We appreciate what the P-16 council stands for and what it is doing," he said.

The final state legislator present, Representative Jim DeCesare, said the issues of minimum wage and smoking will be discussed at some point during the current session. In the realm of education, he said a new SEEK formula needs to be created.

A host of community leaders also spoke at the event to update the legislators and area officials gathered on progress within Simpson County.

Franklin Mayor Ronnie Clark welcomed all the visitors to Franklin for the meeting.

"I'd like to congratulate the (regional) school systems, especially Franklin-Simpson for their recent success, as well as our legislators," he said.

"The real secret is the cooperation between the city, county, Chamber, Industrial Authority and other community organizations," he said.

The Industrial Authority continues its search to locate a company to the new speculative building in Henderson Industrial Park, which was built last year. Broady said there are also plans to extend Henderson Industrial Park in the future, and several other projects are in the works as well. He explained that Simpson County's low unemployment rate was a "double-edged sword" in that having many available jobs in a plus, but it also limits the available workforce.

"We've had some great headlines here in Franklin-Simpson recently," he said. "I applaud P-16 for all of their great work."

Two Simpson County schools principals were present, and presented to those gathered.

Franklin-Simpson High School principal Tim Schlosser spoke about a new pre-student teaching program at the school. FSHS and Bowling Green High School both participate in the program, which is made available to individuals who want to become high school teachers one year before they would normally begin their student teaching. There are 16 potential English and history teachers participating in the program this year at FSHS, according to Schlosser, who said it has been a great partnership with Western Kentucky University.

"In my opinion, its the new way to train teachers," he said. "It allows them to realize if teaching is really for them."

Lincoln Elementary principal Joanna Jones was next joined by fifth grade students Steven Guthrie, Morgan Burk and Joe Maloney, who demonstrated the school's robotics program. Through the program, students specifically adjust censors on moving robots, which is turn follow certain paths and even move objects. The Lincoln Elementary robotics program won its regional competition, and will compete at the state competition this month.

Steve Wallace of the United Way also spoke on the organization's upcoming initiatives.

"The United Way is undergoing a transformation right now," he said.

A variety of social problems, from hunger to domestic abuse, have gotten worse in the area, he said.

"We're going to look at early education, financial stability and health care opportunities," he said. "We look forward to working with the community and legislators."

Following the comments, superintendents from around the region met with the state legislators in small groups for further discussions.

The Barren River Area P-16 Council serves Allen, Barren, Simpson, and Warren counties in Kentucky, and is composed of education, business, and community leaders. It's mission is to lead comprehensive, coordinated efforts to close achievement gaps and to raise the level of educational attainment and economic development in Kentucky.

The next meeting for the P-16 Council will take place Apr. 15 in Bowling Green.