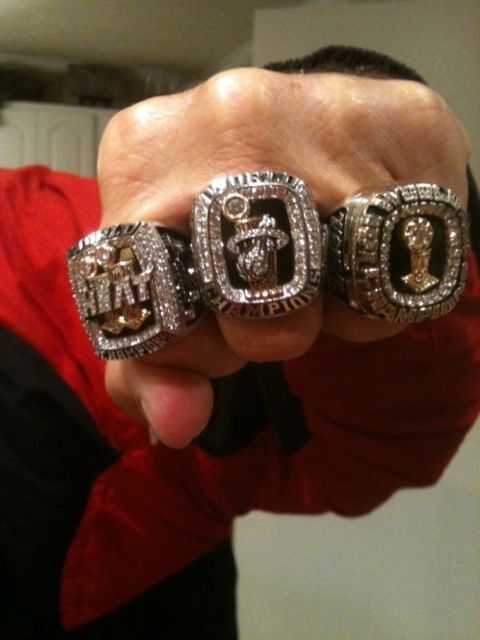 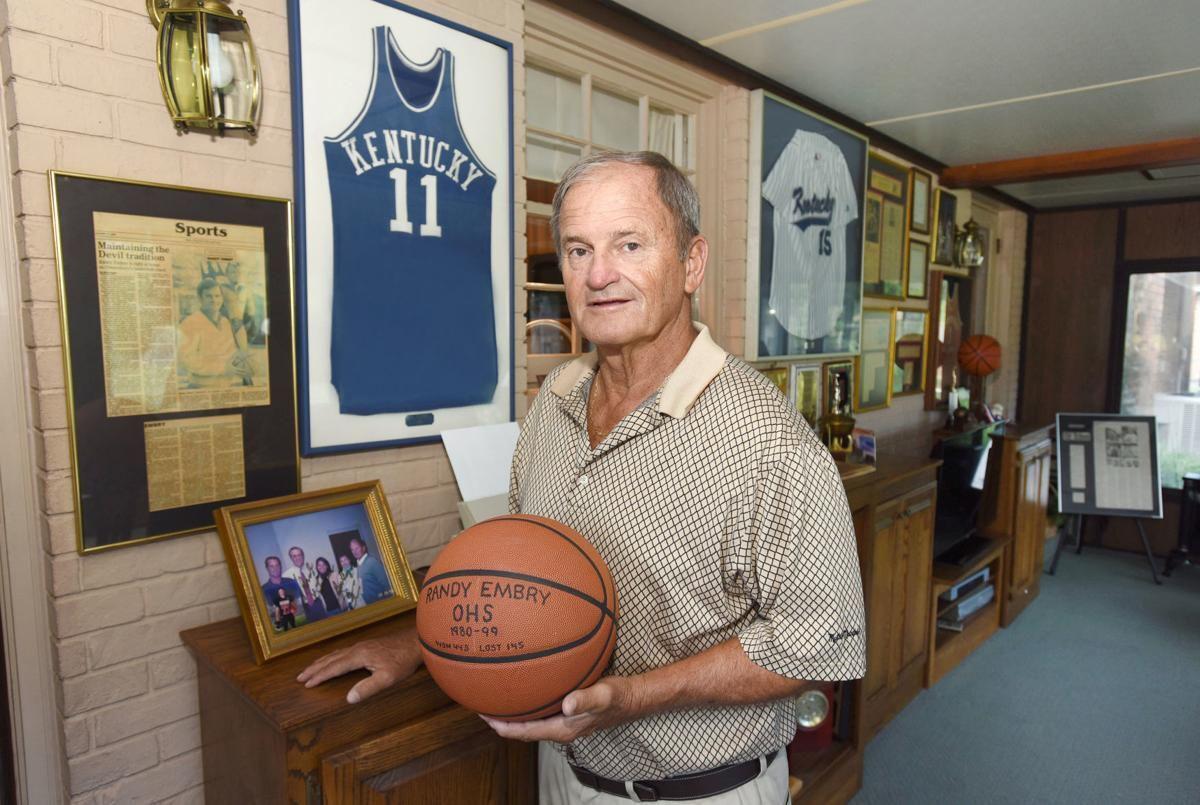 Randy Embry is pictured in front of his framed Kentucky #11 uniform.

Randy Embry is pictured in front of his framed Kentucky #11 uniform.

Randy Embry has never really thought about being anyplace else but in Owensboro. It was at Owensboro High School where he gained a reputation as a player and coach that put him in legendary status in a town as rich in athletics as any in the state.

As a Kentucky high school Mr. Basketball in 1961, he went on to play for Adolph Rupp in Lexington where he captained the team his senior year.

Chick Embry, Randy’s dad, operated a Texaco gas station at the corner of 8th and Fredericka, and it was here that Randy learned at an early age what work was all about.

“My job as a little kid was cleaning the rest rooms, sweeping the floors and doing anything dad told me,” he said.

The Embry’s had another son, Kendall, born six years before Randy, who died a few months after birth.

“I had great family support playing ball from my mom and dad, and I knew I’d rather play sports than work at the filling station,” he laughed.

Brownie Embry, his mom, had played high school basketball at Centertown and later while working at GE played on the company team.

“I looked up Centertown’s record the three years she played and they had some good teams.” Embry said.

Growing up in the 50’s in Owensboro, Randy, like most kids played all sports.

“We played in the streets a lot, throwing baseballs and footballs, but it was tennis that made me realize what the difference was between winning and losing. If you won you stayed on the court, if you lost you sat down,” he offered.

Little League baseball at 9-years-old and a basketball goal at his house was all it took as the building blocks for a great future in sports.

“I was fortunate that my dad put up a goal initially that was lower than the regular height (10-foot), Embry said.” “Because he did, I learned to shoot correctly. As I got older he raised the rim. When he got it to regulation there was very little backboard above the rim.”

The Embry home in Owensboro was a popular place in the neighborhood, especially for shooting hoops, and even when Randy was alone, he could still shoot.

Embry says there was no pressure from his parents to play ball, but that it was sort of expected just from living in Owensboro.

“It was such a sports town, and it seemed like everybody played something,” he says. “I could ride my bike in any direction and find something to play.”

Not lost in it all were the facilities (ball fields and gyms), and coaching along the way. And, kids growing up there were exposed to the successful basketball teams at Kentucky Wesleyan who played at the Owensboro Sportscenter that opened in 1949 with seating for 5,000 fans.

“I saw King Kelly Coleman play most of his games at Wesleyan,” Embry recalled. “And I saw some great teams and players at Daviess County High School. Bobby Rascoe and Don Crosley were two of the best to ever play around here. Our high school team practiced from 2 to 4 at the Sportscenter and Wesleyan from 4 to 6. I saw a lot of Kelly.”

The legendary Coleman played his home games from 1957-1960 at the Sportscenter, and Rascoe and Crosley led Daviess County to the State finals in 1958.

In addition to watching great athletes in basketball, baseball, and football, Embry had outstanding coaches. He was nine-years-old when he first met Jack Hicks when Little League baseball was started in 1952. Hicks went on to win 606 games in 22 years at Owensboro High that included state baseball championships in 1964, 69, 76 and 77.

For Randy Embry, his basketball life was about to shift into another gear.

Bobby Watson, had returned home to coach the Red Devils, where he had been a star on the 1948 team. Watson had teamed with another Owensboro great, Cliff Hagen, to help the Kentucky Wildcats win the 1951 NCAA title.

“Coach Watson came in my freshman year,” recalled Embry. “After playing under Coach Rupp there was a lot of discipline in our program.”

Embry began to draw the attention of colleges his junior year when his team finished third place in the state tourney.

“I was only 5-10,” he says. “I heard from Kentucky, Western, and believe it or not Army and Navy. I couldn’t believe it, the Naval Academy and West Point. All kinds of forms to fill out and they needed letters from Congressmen and Senators. I did okay in school, but I wasn’t that good of a student. I thought why them?”

Finally he figured it out, or at least he thought he did.

“I had an older cousin with the same last name and he was 6-8”. “Surely they had me mixed up,” he laughed.

When the 1961 year rolled around, Embry was hitting on all cylinders. His 28- points a game that included a 50-pointer, and a final four appearance in the state tournament earned him the coveted Mr. Basketball award.

“I knew I wanted to go to Kentucky, but I wasn’t sure they wanted me,” said Embry. “Coach Watson wanted me to go there, too. He took me to several games there. One time we were in the dressing room. Coach Rupp looked at me and said I was too short to play there. He yelled for someone to get a ruler or a book. He wanted to see if I was taller than Coach Watson. He put a book on our heads telling me if coach was taller he couldn’t offer me a scholarship. I got a scholarship.”

To further show how much his high school coach was set on his going to UK, Embry tells of the time Indiana sent him tickets to see Indiana and Ohio State in Bloomington.

“They were ranked one and three in the nation, and I wanted to see the game,” he offered. “I had some high school buddies playing baseball there. But Coach Watson wouldn’t let me out of practice, so my parents went and had a good time.”

Embry wouldn’t trade anything for his experience at UK even though he wasn’t an All-American. A year ahead of the Rupp’s Runts team, he played in a total of 66 games in his three year varsity career. (freshman were ineligible).

“I must have worn more different numbers than anyone in history at Kentucky,” he said. “My freshman year I was number 50, then my sophomore year I was number 10. Going into the next season, they told me Louie (Dampier) was coming up and wanted number 10. I said okay and wore number 11 the next two years.”

Although basketball was his first love, he enjoyed three years as a third baseman on the Wildcat baseball squad.

Hanging around after graduation to help as an assistant Wildcat baseball coach allowed him to attain a masters degree.

“I was ready to coach full time,” he says. “So I accepted the basketball coaching job at Daviess County High in 1967. I was there 10 years.”

Embry became the head baseball coach at Owensboro High, while, for two years, coaching the women’s basketball team at nearby Kentucky Wesleyan in 1979. The following year he became Bobby Watson’s assistant coach in time to win

Watson, the following year called it quits after 23-years, 14 trips to the state tournament and a pair of championships. For Randy Embry he was now the next man up, and he didn’t disappoint.

In 1999, he had left his own footprint when he decided to call it a day at his alma mater.

“I thought about going across the river (Indiana) to coach again, but we didn’t want to move. Owensboro was our town . . . schools, churches, athletics.”

His wife Luann suggested he call Pat to see if he had any openings.

The Pat she was talking about was Pat Riley of the Miami Heat. Embry and Riley were teammates at UK and remained in touch over the years, so the call was made.

The rest is history. For two years he worked part-time watching college kids, putting his own athletic and coaching experience to good use in evaluating and analyzing youngsters with hopes of their own in reaching the NBA and the Miami Heat in particular. In 2002, he became a full-time NBA scout traveling all over the country.

“I’m really in a good location here in Owensboro, not far from Big 10, SEC and ACC schools, plus Western and Murray. It’s like it can’t get any better. I’m getting paid to watch basketball games. Sports have been my whole life and I’m still doing it.

“So far I have three championship rings, one for each grandchild,” he says. “I keep them locked up at the bank.”

Life has been good for Randy Embry. He has done what many men and women in sports would like to do . . . play, coach, and watch games.

“I owe most of it to being able to make an open jump shot, and hit a curve ball,” he added.

Indeed it has taken him up the ladder in basketball. And just think he was almost to small to play for Adolph Rupp.