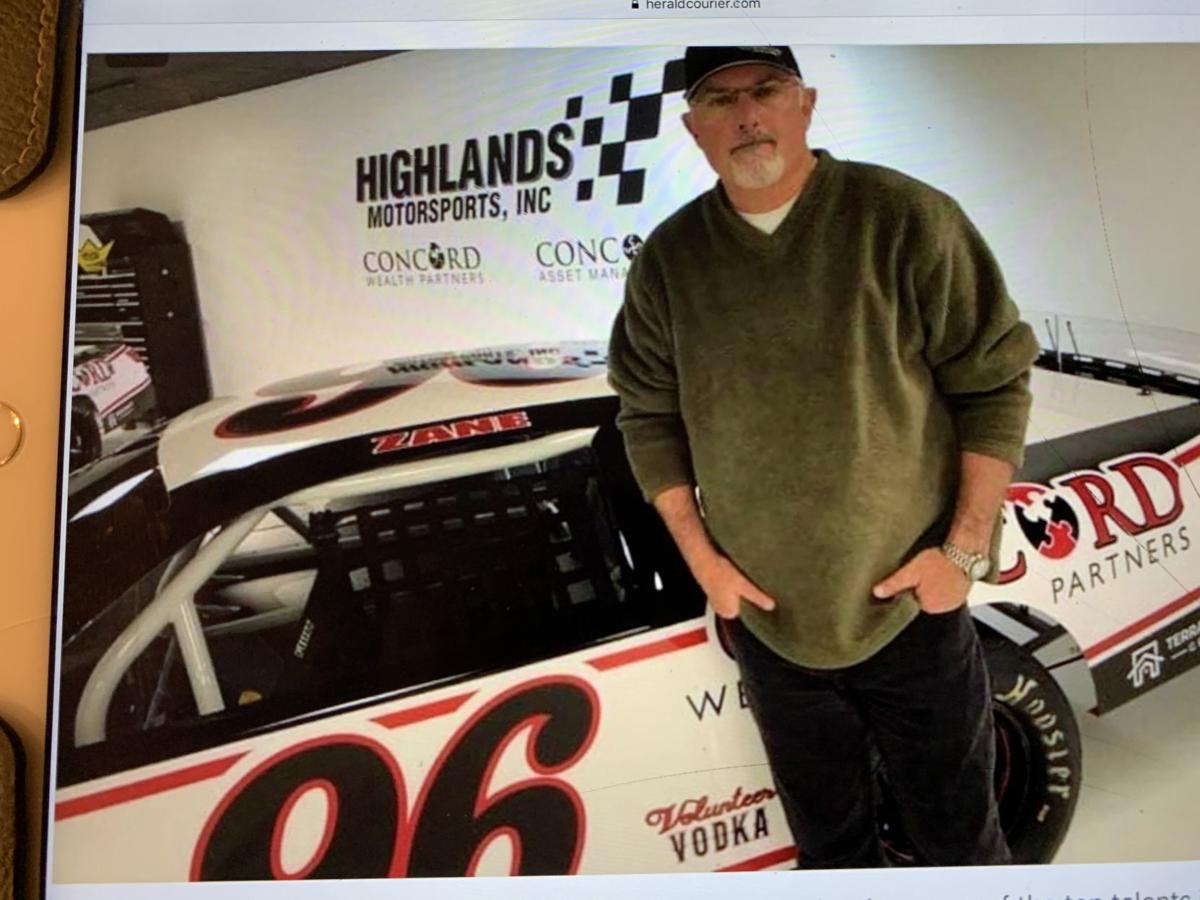 Lorin Ranier stands in front of one of his Ranier Racing cars in Prestonsburg. 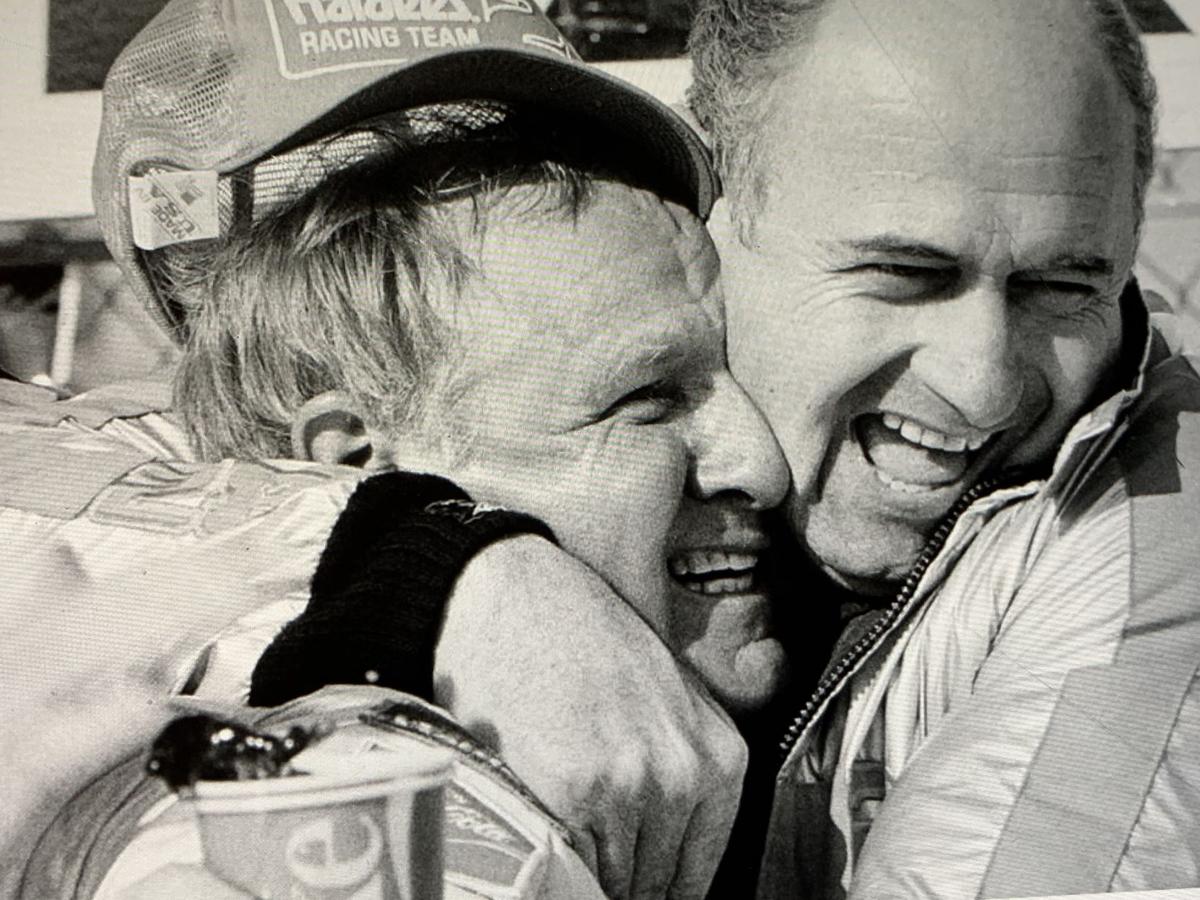 It was happy times for Harry Ranier, right, and Hall of Fame driver Cale Yarborough after winning the 1983 Daytona 500.

Lorin Ranier stands in front of one of his Ranier Racing cars in Prestonsburg.

It was happy times for Harry Ranier, right, and Hall of Fame driver Cale Yarborough after winning the 1983 Daytona 500.

There’s a good bet that when Kentuckians think of NASCAR, the first place that pops up is the Kentucky Speedway in Sparta or Owensboro, mainly because of the Waltrip brothers, Darrell and Michael.

Lost to time is the role Prestonsburg, Kentucky has played in the sports history, particularly the Daytona 500.

It’s not like Prestonsburg had been a racing hot bed, even though Corbin, two hours away, lays claim to the first official NASCAR race in Kentucky in 1954. Lee Petty, Richards father, won that race on the half-mile track that is still there.

So, how did it happen?

H.B. Ranier owned a Lincoln-Mercury dealership in Prestonsburg. It was in an era before NASCAR went mainstream, when it was called stock car racing, it meant just that . . . stock cars. H.B. would take a car from his lot and actually race it on some of the dirt tracks in the area. But H.B. Ranier wanted a little more and entered one of his cars in NASCAR’s Southern 500 at Darlington in 1954, fin-ishing fourth. Two years later in 1956, he placed 14th.

H.B. died in 1972, and that’s when his son Harry assumed the leadership of sev-eral businesses his dad had owned. But it was car racing that had him hooked. A childhood of following his dad to all of those early day races had implanted a desire to succeed.

Even when he was dating his future wife, Juda, he proclaimed to her that, “I’m going to win the Daytona 500 someday.”

The truth was few people gave much credence in Harry’s dreams. NASCAR was a big deal, even back then, so how could a little garage owner in the mountains of eastern Kentucky break into the big-time of automobile racing?

Ranier proceeded to act on his dream and he had more than enough moxy to make it happen.

He parlayed his dad’s car dealership into a very successful local business that resulted into the finances to build race cars. It was reported that when Harry sold five of his coal companies in the mid-70s, he cashed in for over $30 million.

Now that money was not an issue, Ranier latched on to some of the best race drivers in the sport. For six years, from 1979 to 1984, Ranier Racing sat on the pole at the Daytona 500 five of those years.

With the likes of future Hall-of-Famers Buddy Baker, Bobby Allison and Cale Yarborough driving Ranier’s cars, the race team from Prestonsburg had turned into a dominate force in the world of stock cars.

Juda Ranier recalled that her husband’s success didn’t seem to be such a big deal back in their hometown.

“We would win the Daytona 500, fly back home and it was as if nothing hap-pened,” she said. “Look, what we did was a real big deal.”

Indeed, the guy from Floyd County, Kentucky won three Daytona 500s, once with driver Buddy Baker in 1980, and twice with Cale Yarborough back-to-back in 1983 and 1984.

It was the Oldsmobile that Baker drove in Ranier’s first win in 1980, that became legendary. Nicknamed the “Gray Ghost,” because of its paint scheme and the way it swooshed over the gray asphalt gave it a ghost-like appearance as it set an average speed record of 177.6 mph for the 500.

For several years, Ranier’s son, Lorin, collected NASCAR memorabilia that relat-ed to his family’s racing business and led efforts to create a museum that paid homage to their success. It would let people know the role a Floyd County resi-dent had in building NASCAR to what it is today.

For years Ranier Racing had occupied space in the highly visible Mountain Arts Center in Prestonsburg, but unfortunately the local powers-to-be decided the space could be better utilized.

For the time being Ranier Racing’s exhibit is taking a pit stop.

Lorin Ranier has been a part of NASCAR for decades. Working with his father first before gaining a reputation as one of the top spotters in the sport, he led the way to bringing A-list driver’s Davey Allison, Tony Stewart, and Kyle Larson aboard.

Today Lorin is all about searching out talent that can someday drive competitively at the top level.

“The young talent seeks me out to help them,” he says. “It’s mainly the parents. I go to a lot of the tracks where the young drivers are racing.”

“The real NASCAR fans who knew its history came to Prestonsburg just to see the history,” she offered. “Lorin was so easy to work with and most appreciative

of our towns efforts to tell the complete story.”

Ranier is in hopes Prestonsburg will do its part in keeping his family’s connection to the town and NASCAR live.

“The mayor and I are working on finding another location,” says Ranier. “Pres-tonsburg is so important to our history. We have two of our cars that are in NASCAR’s Hall of Fame . . . the Gray Ghost and the Hardees car.”

The town’s mayor, Les Stapleton, says he is looking to find the “right place” for the Ranier Racing memorabilia.

“I don’t think the MAC is the right place, but we’ll find it,” the mayor said. “Their history is important to us.”

Samantha Johnson is the director of the Prestonsburg Visitors Bureau.

“We’re still looking into a place to relocate our history with the Ranier family. They have been good to us over the years.”

Let’s hope everyone sticks to their word and keeps this NASCAR connection to eastern Kentucky alive.

There’s no excuse, get up, get out and get going! Gary P. West can be reached at westgarypdeb@gmail.com.