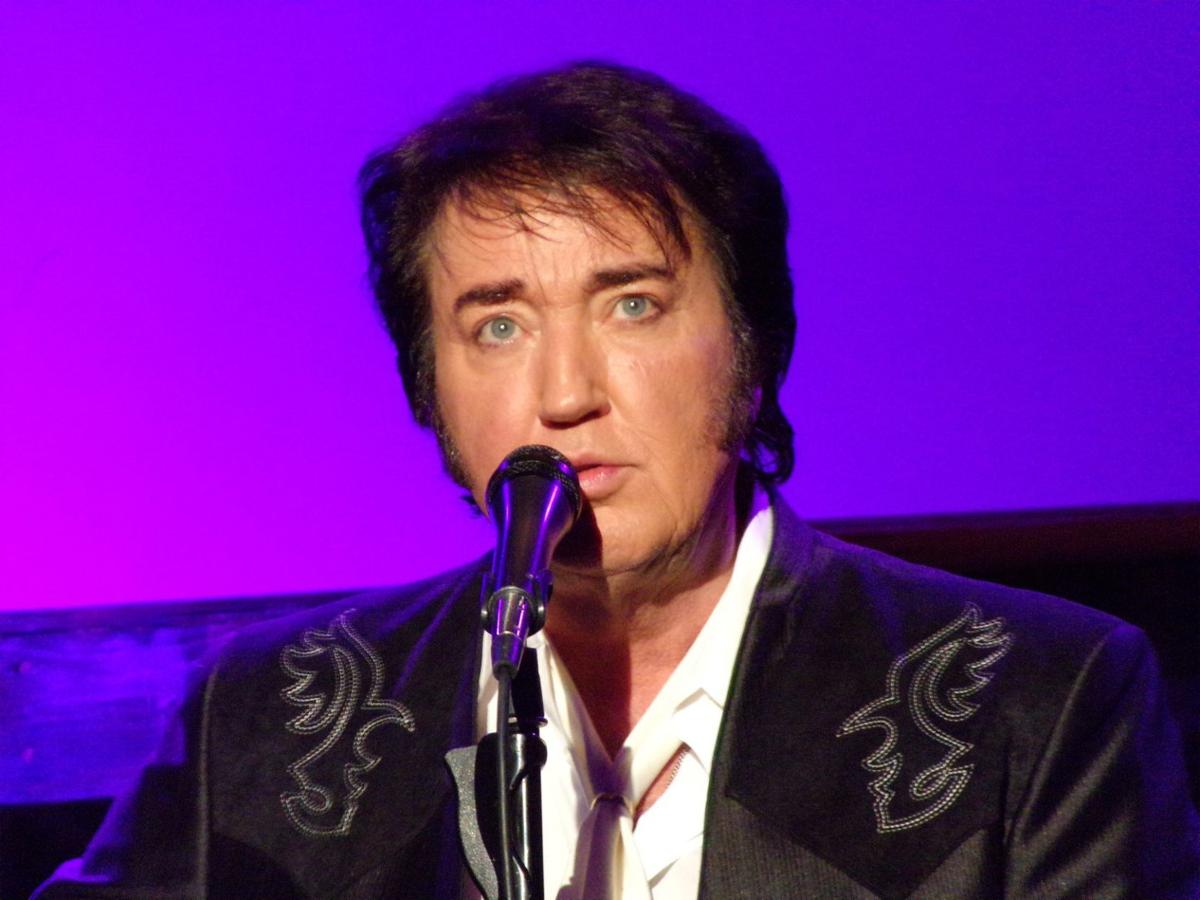 Eddie Miles is pictured with his Elvis look. 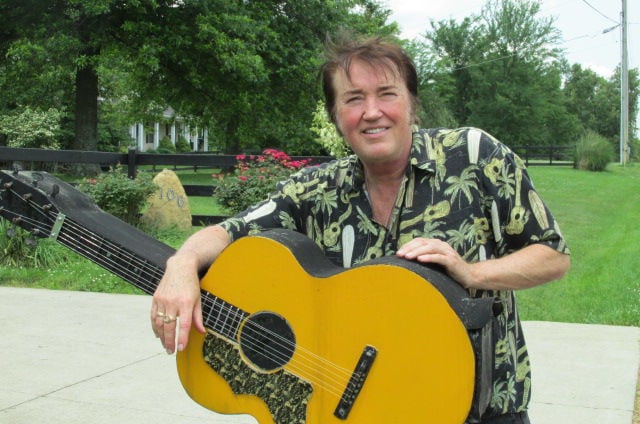 Eddie Miles stands beside his personalized mailbox at his home outside Bardstown.

Eddie Miles is pictured with his Elvis look.

Eddie Miles stands beside his personalized mailbox at his home outside Bardstown.

What does an Elvis impersonator do when he retires after more than 25 years in the business? Well, he decides he really didn’t need to retire.

That’s what Eddie Miles was faced with in 2016 when some health issues led to his walking away from a gig he had enjoyed since 1990.

Those fans have been acquired over a lifetime of music for Miles from the time he started performing with his two brothers and a sister as the “Miles Kids” at the Lincoln Jamboree in Hodgenville at 10-years-old.

“I got my first guitar when I was eight, and from the beginning I was singing Hank Williams and Johnny Cash songs about drinking, cheating, divorce, heartache and prison. We lived near a beer joint, and here I was a kid who would go over there and play songs. Those guys would tip me and I’d go home with $12 or $13 . . . a lot of money for a little boy.”

Miles, a 1973 graduate of Marion County High wasn’t sure what he wanted to do with his life. He knew he could get a construction job, so that’s the route he took.

“It was about the same time I heard a radio ad that an Elvis guy was going to be performing at the Lincoln Jamboree and I wanted to see him” recalled Miles. “He came out with blond hair, a Beatle haircut, and wiggled around a lot. He looked nothing like Elvis. The crowd went crazy.”

It was then that Miles had an idea that might be a preview of things to come.

“I knew I could do better than what I saw, so the next show in Hodgenville I did an Elvis routine. I think I did ‘All Shook Up,’ ” he recalled.

Lincoln Jamboree owner Joel Ray Sprowles was so impressed with the young Miles that he had a white, fringe-laced costume made for his new star. Pictures were made to sell to the sold out crowds and the Elvis gig was launched.

“I actually made more money from selling the pictures than Joel Ray was paying me,” he laughed.

Sprowles had another costume made for Miles, and because he was selling out his 1,000 seat theater consistently with the Elvis act, he wanted to become his manager. It wasn’t to be, and by 1978 Miles was back in construction work.

It was then that he knew he had to do something to earn a full-time living.

“I had a family to support, so I joined the Air Force for four years,” he said. “I still wanted to pursue a music career. People called me Elvis . . . I had that look, so I decided to put on my own Elvis show in January 1983.”

He rented the Nelson County High School Auditorium in Bardstown for $75, printed up his own tickets, put out his advertising, and his wife put together his outfit.

“My two brothers played with me. We had a drummer, base player, piano, and a trumpet player,” he said. “We sold tickets at $5 and sold out. I scheduled another show two months later.”

Not quitting his day job and now working for a petroleum company in Bardstown at $4 per hour, Miles was about to suffer a financial setback when he was fired from that job.

“What am I going to do?” he remembers questioning himself. “It cost me my job when I had to go to Louisville to find a spotlight for my next performance at the Nelson County High School. “My absence from work was not good.”

Struggling financially to support his family, and with no health insurance help was just around the corner.

The year before, he had sent a video of his Elvis routine to Triangle Talent, a booking agency in Louisville that booked shows for several state fairs throughout the country.

“I couldn’t believe it when they called me,” Miles said. “They had it for a year before they played it. Now they were telling me they could book me at the Missouri State Fair for $11,000. Are you kidding me? All I heard was $11,000 . . . halfway read the contract. It was 12 days, two shows a day. I had to pay my band and motel rooms. It was hot with those heavy outfits and besides that we were next to a hog barn.”

Miles had always had success selling his pictures and cassettes at his shows, but now he was even selling autographed scarves that had become part of his Elvis persona.

“We sold out of scarves and went to Walmart, bought a bunch of material, cut them into scarves and sold out again at a dollar each,” he said. “Every show was a sellout to a standing ovation.”

In spite of what looked good in the beginning, Miles made a profit of only $700 after expenses.

It was a lesson learned.

“I was really disheartened,” he said. “Thought about going back in the Air Force, but I got a call from the Coors Beer Company. They wanted to hire me to do a series of shows. They were going to put me on the road. They were all excited and so was I, but they never really followed through.”

Miles was able to land a job in 1985 with the local post office in Nelson County, and during his two week vacations he would perform at state fairs.

“I went back to the Missouri State Fair, but this time I got $22,000,” he said. “I also did the Iowa State Fair in DesMoines. They even started a fan club for me and wanted me to do some of their county fairs. When I got back to Kentucky they were sending me all kinds of gifts . . . lots of cookies. Believe it or not people from Iowa would come by the post office and take pictures of me there behind the counter.”

Over the years in Iowa he had gone from doing his Elvis routine in front of 2,000 in the beginning to 22,000 later.

He also performed at the Ohio State Fair.

Throughout his career Miles was connected to theaters in Pigeon Forge, Tennessee, and Myrtle Beach, South Carolina. He was making money, but the wear and tear of 250 shows a year had begun to take its toll.

In 1999, he underwent back surgery and the following year, by-pass surgery.

Miles loved what he was doing. He also knew he had to slow down.

He had secured the sound track from one of his live concerts and set out to take Elvis to small venues where he didn’t have the major expense of a band.

“It was like Karaoke,” he described. “I was doing okay.”

Over the years Miles had managed to avoid all of the Elvis impersonator competitions. They were everywhere. He let his talent speak for itself. He had performed in some 25 states, all of the Caribbean Islands, and Thailand. But in 2006, however, there was one of the competitions that caught his attention.

Throughout his career Miles has rubbed elbows with the likes of J.D. Summer and Stamps Quartet, Charlie Hodges and Scotty Moore all of which were part of Elvis Presley’s crew.

“I’ve traveled far and wide and Eddie is the closest to the look and sound of Elvis,” says Hodge, a man who lived at Graceland, sang backup and gave Elvis his scarves and water on stage.

Miles has his own take in describing the Elvis thing.

“Elvis impersonators are not looked on in high regard . . . sort of like lawyers . . . there are a few good ones and some really bad ones. In fact, instead of calling them impersonators we’re now called Elvis Tribute Artist.”

“I’m now only doing small venues close to home,” he said. “I’m doing a series of shows in Lebanon that works for me. It’s 250 seats and it sells out.”

The show is billed as the Eddie Miles Salute to Music Legends.

“I do a little Johnny Cash, Conway Twitty, Marty Robbins, George Jones, Roy Orbison and a few others,” he says. “I finish up with Elvis in the second part of the show.”

For a man who at one time claimed some 20 Elvis costumes, knows hundreds of Elvis songs, and was an annual staple at the Derby Dinner Playhouse across the river from Louisville in Clarksville, Indiana, he seems to be comfortable living on the outskirts of Bardstown where his back yard is taken up by a small lake stocked with catfish and colorful Koi fish. The only sign that an entertainer might live here is a large guitar that has become part of the mailbox in front of his home.

Robin Humphries is the executive director of the Center Square where Miles performs in Lebanon.

“He keeps getting better,” she says. “He seems very relaxed, really enjoying where he is at this time in his life.”

Miles has sold out the 250-seat venue in all three shows this year, Humphries said.

“He has a very loyal fan base that follows him wherever he performs. People come from North and South Carolina, and Ohio.”

“None of my shows are exactly alike,” Miles adds. “I don’t sing the same songs in every performance.”