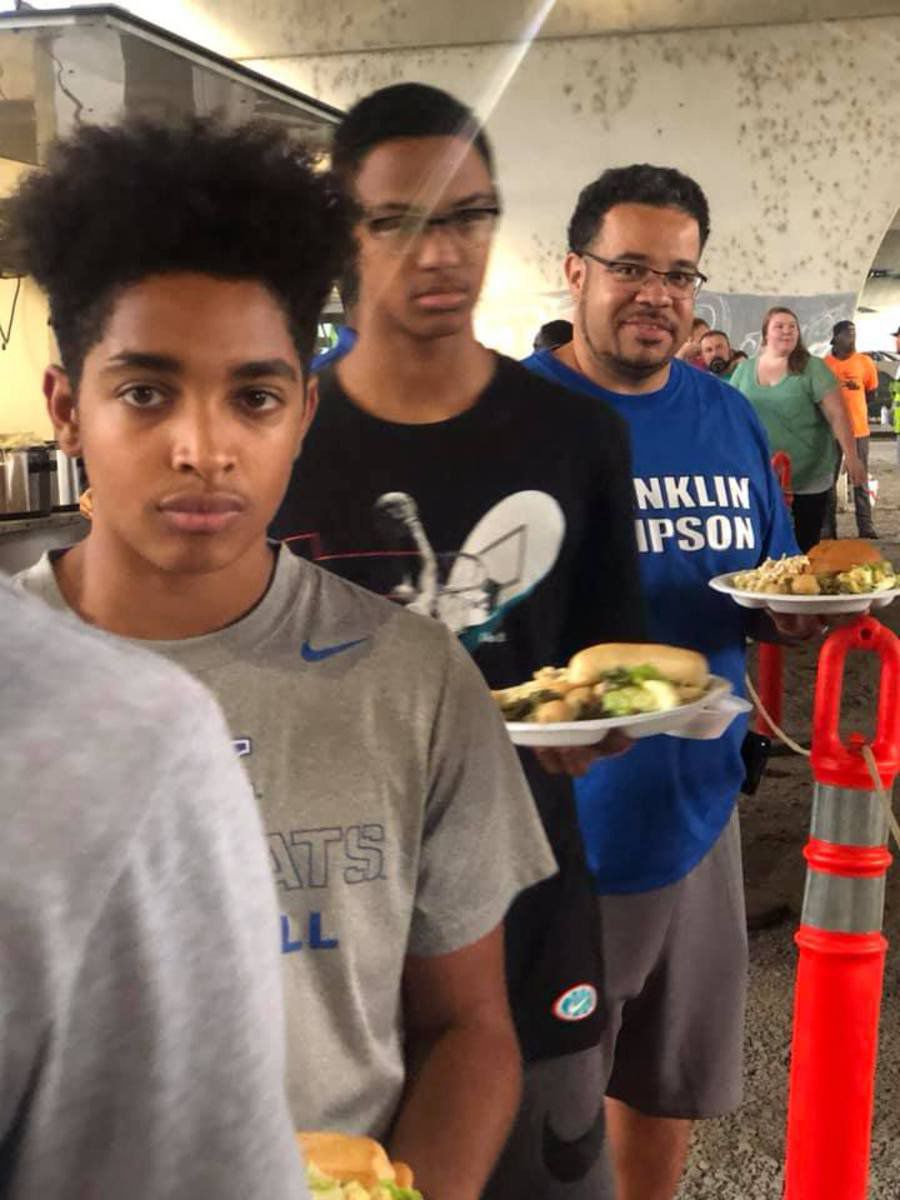 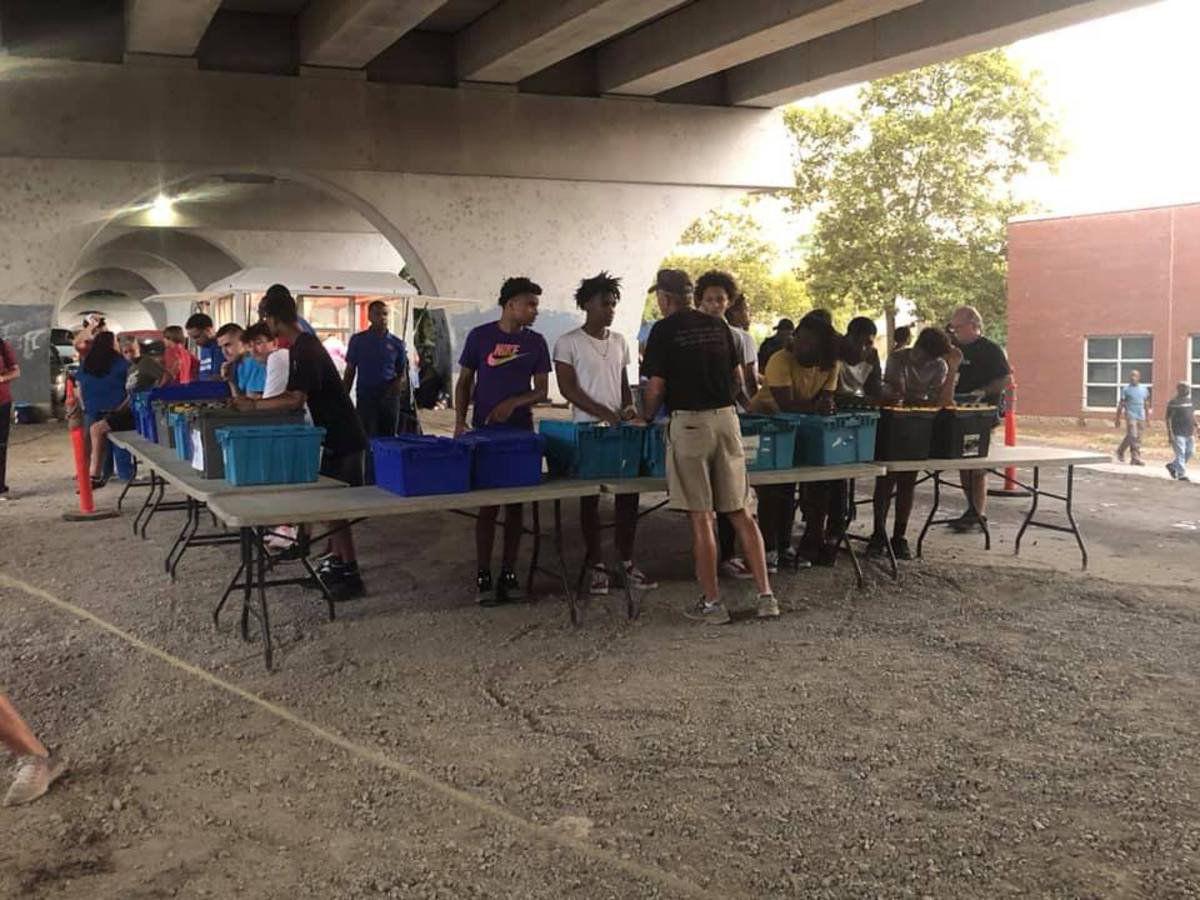 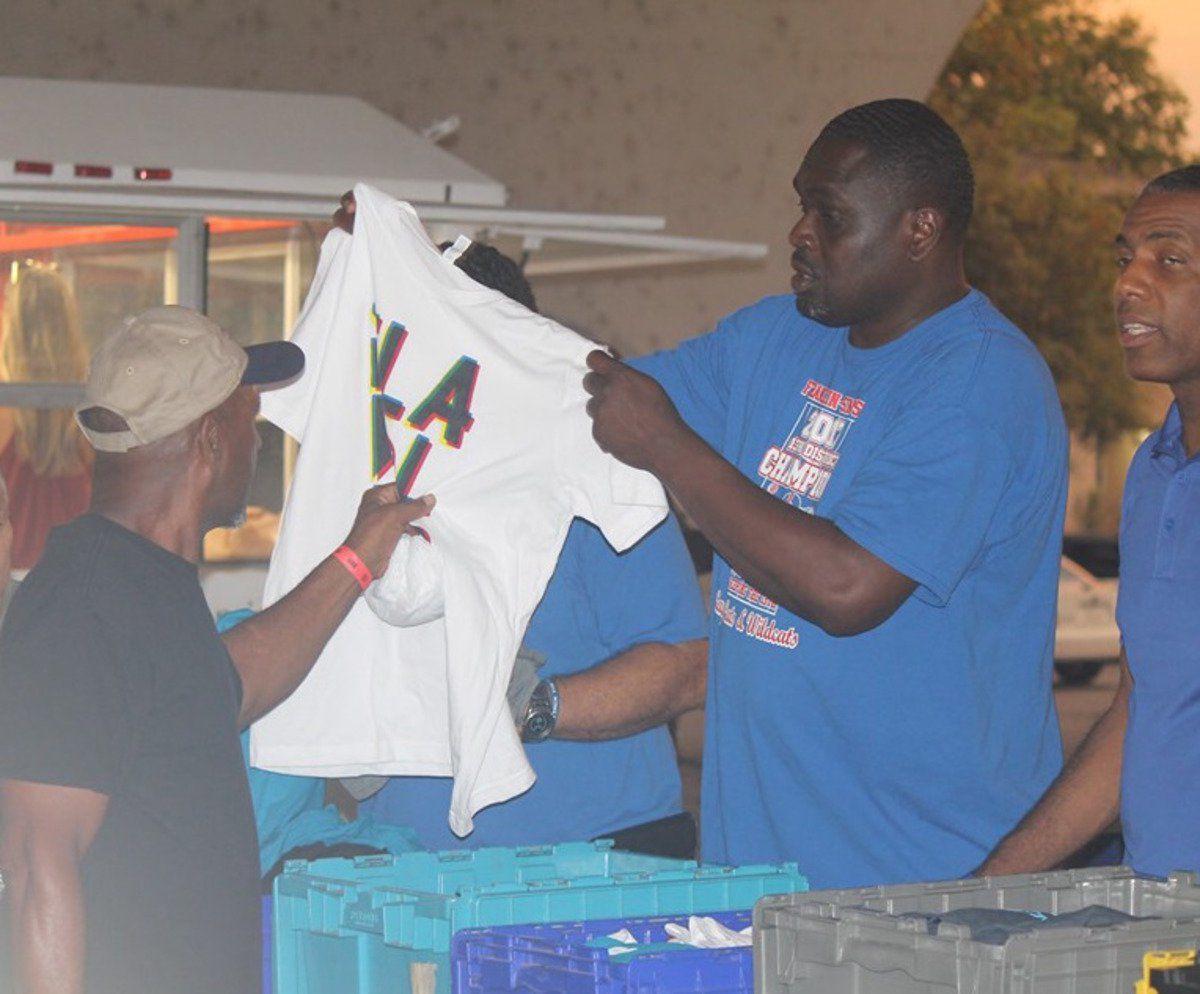 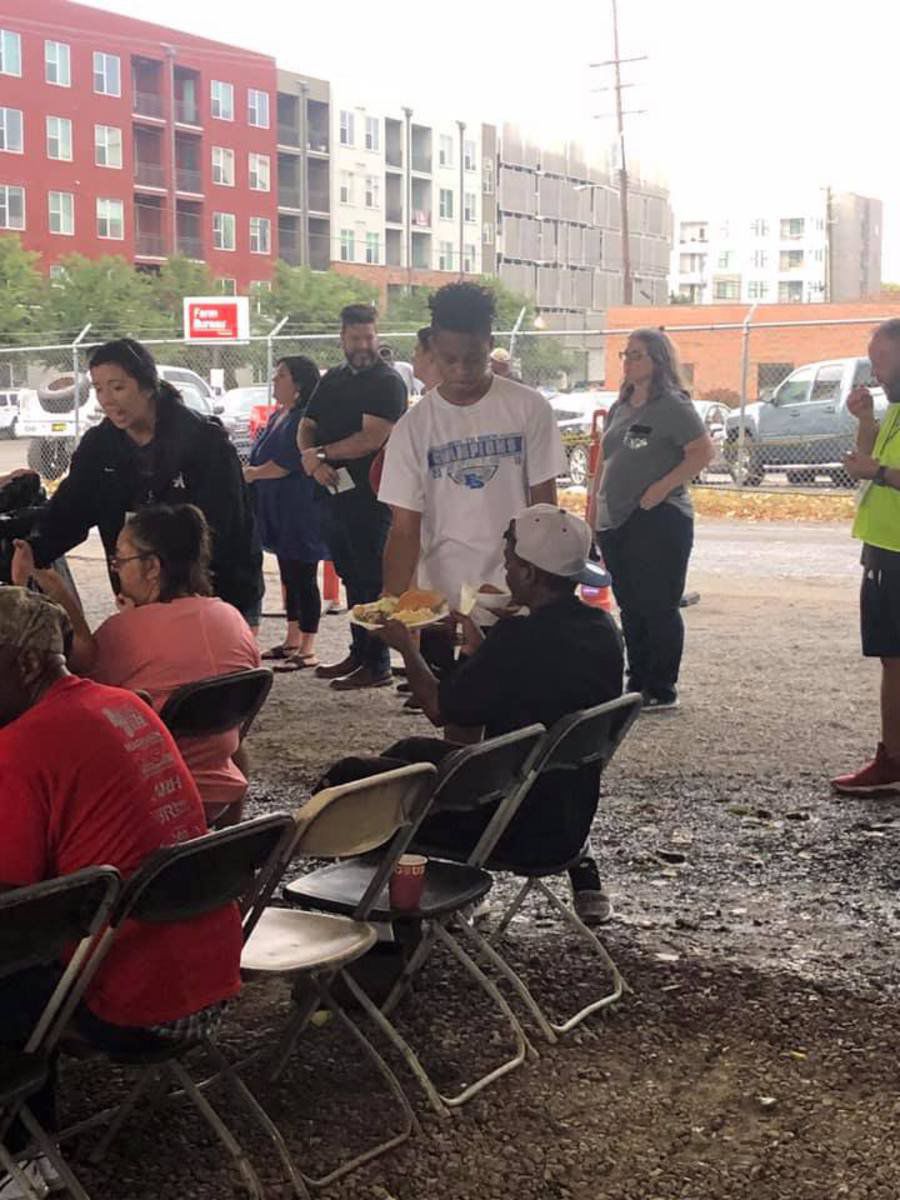 Jalen Briscoe hands a meal to a patron as part of outreach work with Bridge Ministry. 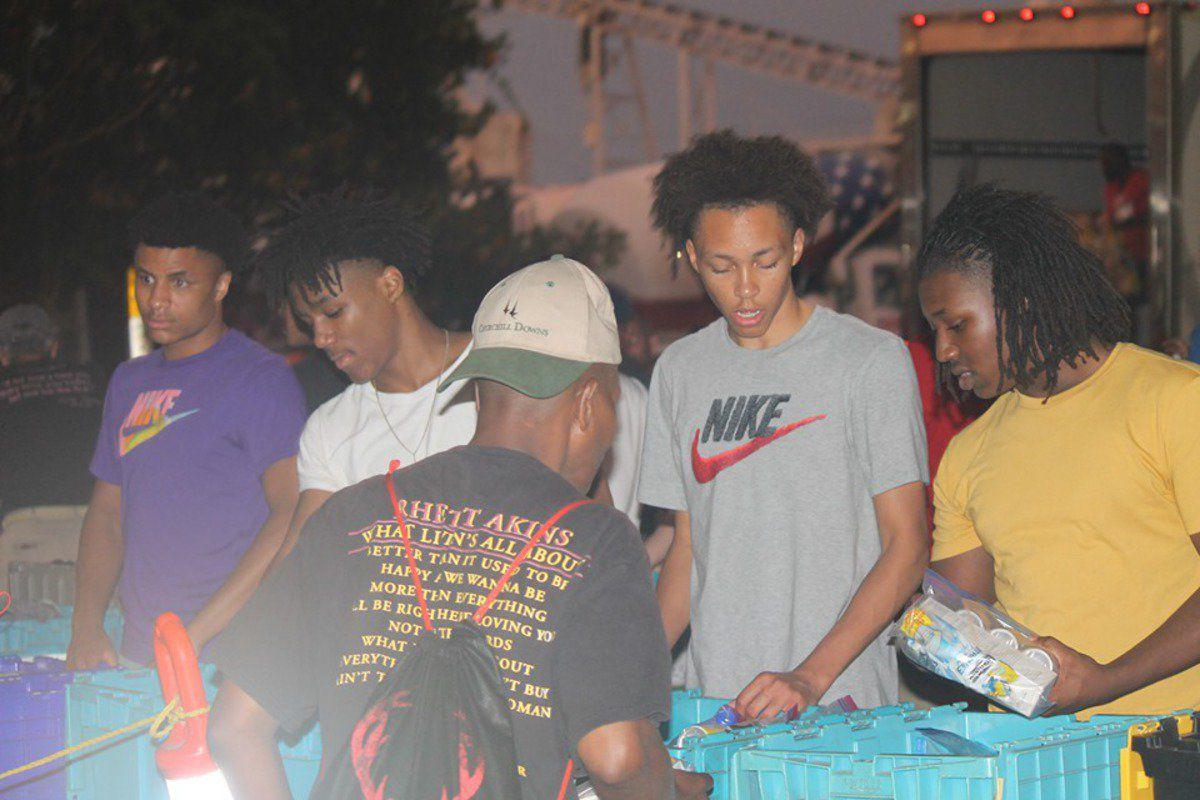 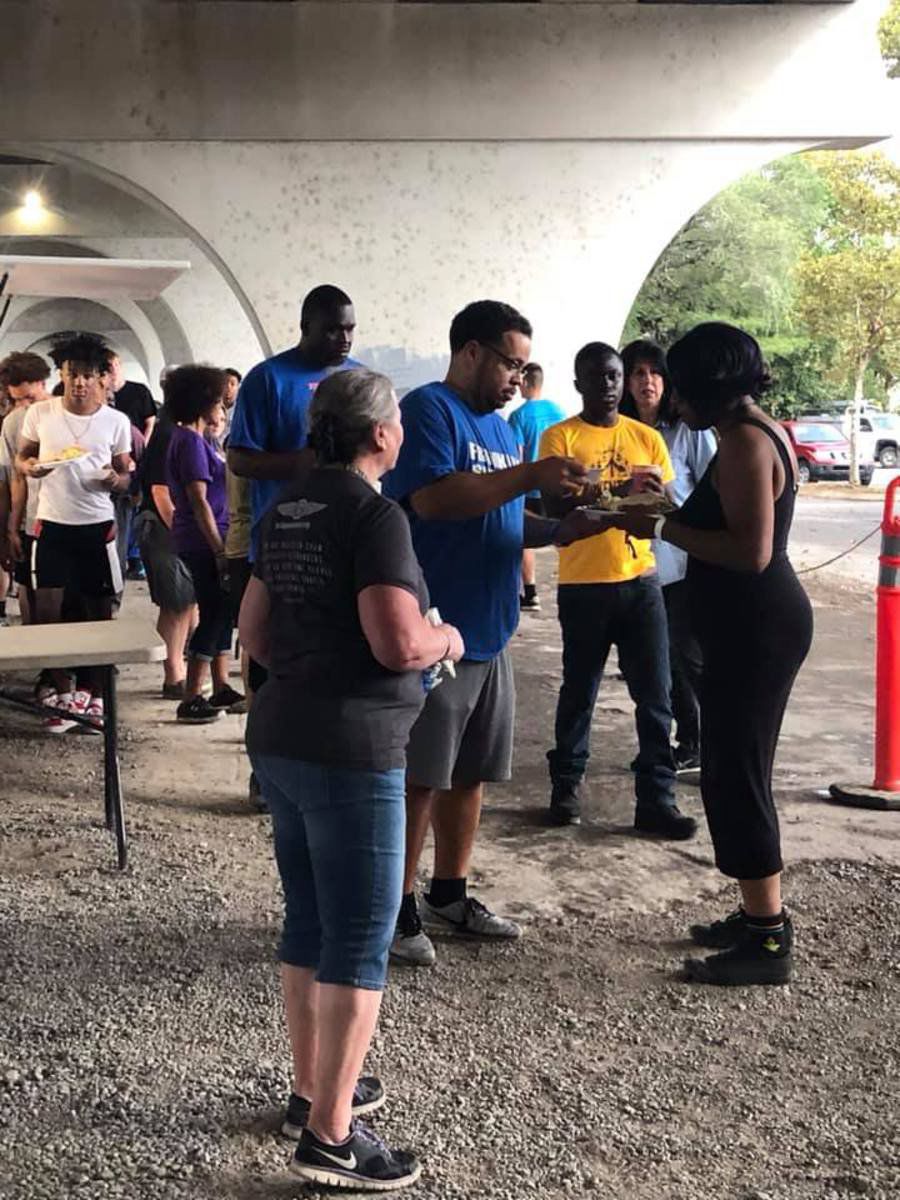 Coach Dee Spencer (right) hands a woman a plate of food as Coach Tony Lovan (center) and Kyjuan Stutzman (left) walk with plates in their hand to people in need. 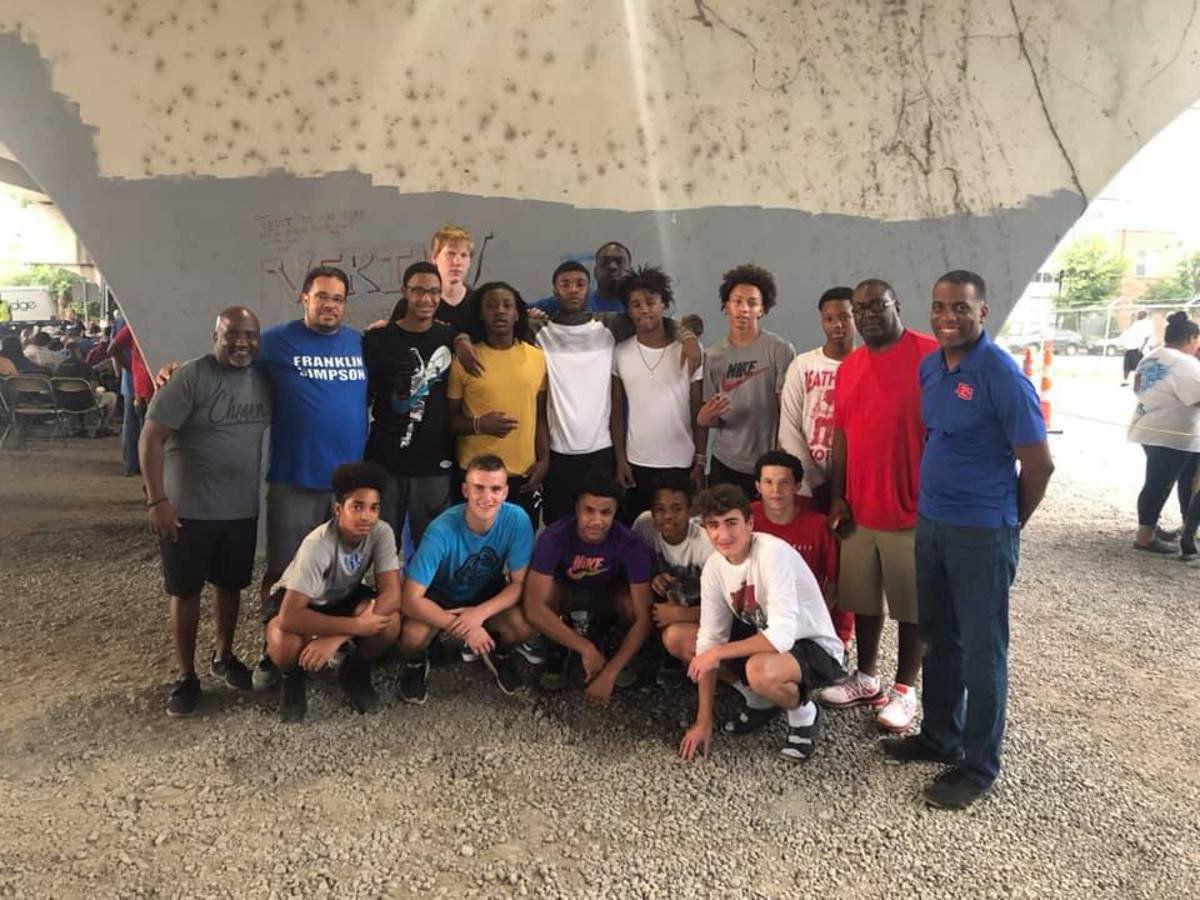 Jalen Briscoe hands a meal to a patron as part of outreach work with Bridge Ministry.

Coach Dee Spencer (right) hands a woman a plate of food as Coach Tony Lovan (center) and Kyjuan Stutzman (left) walk with plates in their hand to people in need.

Quotes like "what is here today can be gone tomorrow," "count your blessings" and "don't take things for granted" are things that have been instilled in people throughout life.

The Franklin-Simpson Wildcats boys' basketball team showed an act of selflessness when they went to feed and give clothing to the homeless in Nashville, Tenn., back in September.

Middle school boys basketball coach Derfra Holt got the ball rolling on how to get the Wildcats' basketball team involved.

"I went with a friend of mine a while back and she took her daughter there to learn about giving back and had a wonderful experience in meeting people and giving back," Holt said. "I talked to coach (Michael) Doss and (Dee) Spencer to see if the coaches could go but then Spencer had an idea about sending the basketball team there. Our school has done something like this before as our African American History Club has gone to Nashville. I called the Bridge Ministry group that runs the program and told them that we were coming and our kids were able to help give commodities, feed and clothe them."

Varsity head basketball coach Dee Spencer quickly wanted to get involved with this and also wanted to show his young men that even though the boys may have it tough sometimes, there are others that are going through a rough stage in their life.

"We, the coaches, wanted to take them to give back, " Wildcats head coach Dee Spencer said. "We are building more than basketball players. We want to have well-rounded young men and giving back is huge in the process. It was a humbling experience for all of us and no matter how bad we think we have it, there is always someone that has it worse. We will be going back for sure.

They really enjoyed the opportunity to servicing other people."

According to the players, Spencer called their parents and they agreed that they should take part in giving back. When the team arrived in Nashville, they saw hundreds of people and some with babies and young children, it was an eye opening experience.

"It was a humbling experience," Demarco Chatman said. "I thought as we were heading there that there would not be very many people there. But once I got there, I was shocked to see how many people and families were living off the street.

"I have done something like this before with my church in Bowling Green. But it was more people and families in Nashville that we were able to help," Dawson Knight said. "To see that many people especially kids our age was truly an eye opening experience."

The team made connections with small conversations with people and learned some realities about life. They also learn to make smart decisions and take your education seriously. The players will be entering the "real world" very soon and this act of selflessness has brought the team even closer. The team looks forward to going back and helping out more with the bridge ministry during the offseason. The team also learned that there is truly nothing wrong in being a good person and random acts of selflessness to those who are less fortunate actually goes a long way.