A Ford F-150 pickup truck struck one of the buildings at Garvin Point Apartments on Eddings Road near Exit 6.

A Franklin man was charged with attempted murder after a shooting at Garvin Pointe Apartments on Eddings Road near the Exit 6 I-65 interchange on Monday, Dec. 13.

Franklin Police responded to a report of an active shooting with multiple shooters and victims at about 9:16 a.m.

According to a press release, the victim, Garcia Conner, 38, of Franklin, flagged down police officers.

Conner said the shooter was still in the apartment complex. Police were given multiple locations where the shooter was. At this point, businesses were notified and locked down.

The release said through investigation, the alleged shooter, Christopher Chadick, 40, of Franklin, was located and taken into custody without incident.

Conner was taken to Medical Center at Franklin and then transported to Vanderbilt University Hospital. The release said he was in stable condition as of the afternoon following the shooting.

Police also said Conner was driving a Ford F-150 pick up truck through the apartment complex when he was shot after which the vehicle struck one of the buildings.

Chadick was lodged in the Simpson County Detention Center and charged with the attempted murder, possession of defaced firearm, tampering with physical evidence, criminal mischief and possession of firearm by convicted felon.

While presenting the County Clerk’s 2022 budget to Simpson Fiscal Court on Dec. 7, Thurman announced Jan. 1 2022 is her final day serving as county clerk.

She has been county clerk for about five and a half years and has been employed at the clerk’s office 32 years.

“Besides my family, its one of the biggest honors of my life, serving the people of Simpson County,” Thurman said.

Simpson County Judge/Executive Mason Barnes will appoint the next county clerk. Barnes has 30 days after Thurman’s official retirement date to make the appointment.

During the meeting it was also announced that Dale McCreary is returning as Franklin-Simpson Ambulance Service Director and Tony Barnett will serve as the assistant ambulance service director.

Chandler said the additional personnel keeps the ambulance service duties from being bid out to other agencies.

An emergency meeting of the ambulance service board of directors to discuss staffing was held on Dec. 6.

The court approved first reading of a county budget amendment ordinance adding $165,086 in un-budgeted revenue and appropriations to the county budget.

The revenue includes $111,288 in general fund surplus from the prior fiscal year being used to purchase election equipment and $53,798 in federal and state funding for the jail to be spent for jail costs.

The ordinance must pass a second reading vote and be published to take effect.

The court approved an agreement to receive $75,500 in federal funding to be used by law enforcement to combat drug trafficking.

Simpson County Director of Emergency Management Robert Palmer worked to secure the federal grant to pay for the signs that say “When Flooded Turn Around Don’t Drown.”

Simpson County Public Works Director Bobby Groves said numerous safety signs are being placed on curves and hills on Peden Mill Road and Roark Road. The signs were provided to Simpson County after a safety audit conducted by the University of Kentucky.

And, the county’s Nov. 30 financial statement was approved, subject to audit. 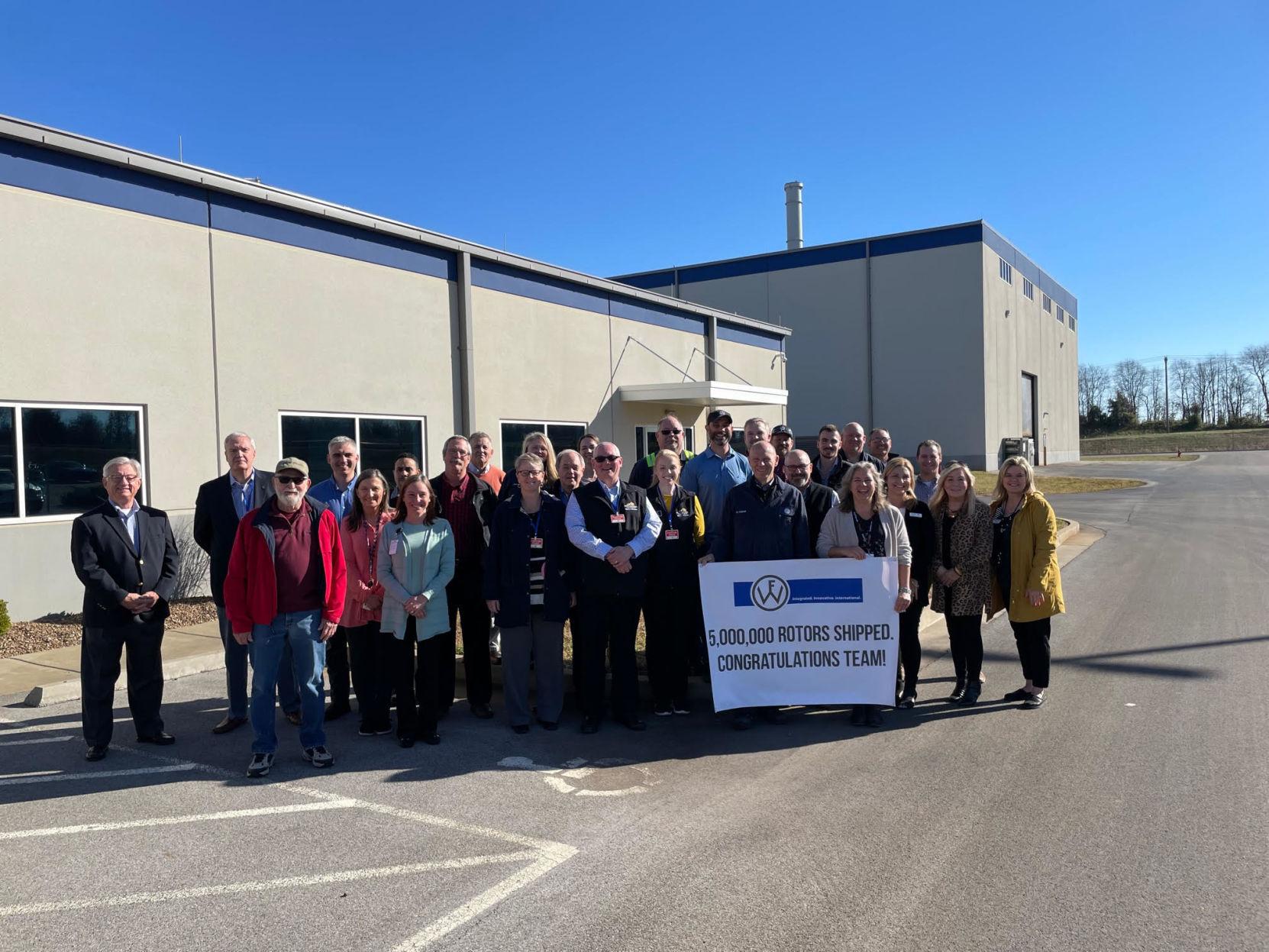 A number of local community leaders joined Fritz Winter employees to celebrate the 5,000,000th brake rotor produced and shipped from their Franklin Kentucky operation. Darryl Konsler, CEO of FW-NA, greeted community leaders and expressed his appreciation to both the Fritz Winter team and to the community for all their efforts. With ground breaking in 2017 and start of production in late 2018, Fritz Winter North America employs more than 250 employees. Fritz Winter, which was founded in Stadtallendorf Germany, serves a variety of automotive and heavy-duty truck manufacturers. Their North America operation is one of the largest manufacturers in Franklin and south central Kentucky.

The cost to improve the system is about $2.9 million and will be funded through federal American Rescue Plan Act, also known as ARPA.

There are areas in the county in which the approximately 15 year-old equipment does not work as it should. Officials say this jeopardizes the safety and well-being of first responders and the community as a whole.

“Our number one priority in government is public safety, period,” Simpson County Judge/Executive Mason Barnes said during the meeting. “It doesn’t matter how many other things we do well, if we get public safety wrong, we have failed this community.”

Barnes talked about a recent pursuit through Simpson County in which emergency personnel could not communicate with each other using the current radio equipment.

“It is dangerous to have your emergency responders out in pursuit, out on the scene of an accident, out at the scene of a fire or anywhere and know there is a real possibility that they may not be able to communicate with anyone,” Barnes said. “I know what we are talking about here is a lot of money, what is this community worth?, what is a life worth?”

During an interview the day following the meeting Simpson County Director of Emergency Management Robert Palmer talked about when issues with the current communications system began to be identified.

“The local emergency communications committee identified we were beginning to have issues with the current system as far back as 2014 and has worked consistently since then to identify a proper replacement,” Palmer said. “The timing of this funding (ARPA) is perfect for our needs.”

The improvements are expected to begin soon and take 13 to 18 months to complete.

The final development plan is for “The Pads on Madison,” a 96-unit apartment complex at 707 W. Madison St.

The preliminary development plan is for “Magnolia Farms” subdivision on the south side of Highway 100 between Rapids Road and I-65 Exit 6.

Final development plan approval is the next step for the 63-lot subdivision to be built in three phases.

The zone changes will now go to the Franklin City Commission for consideration of approval.