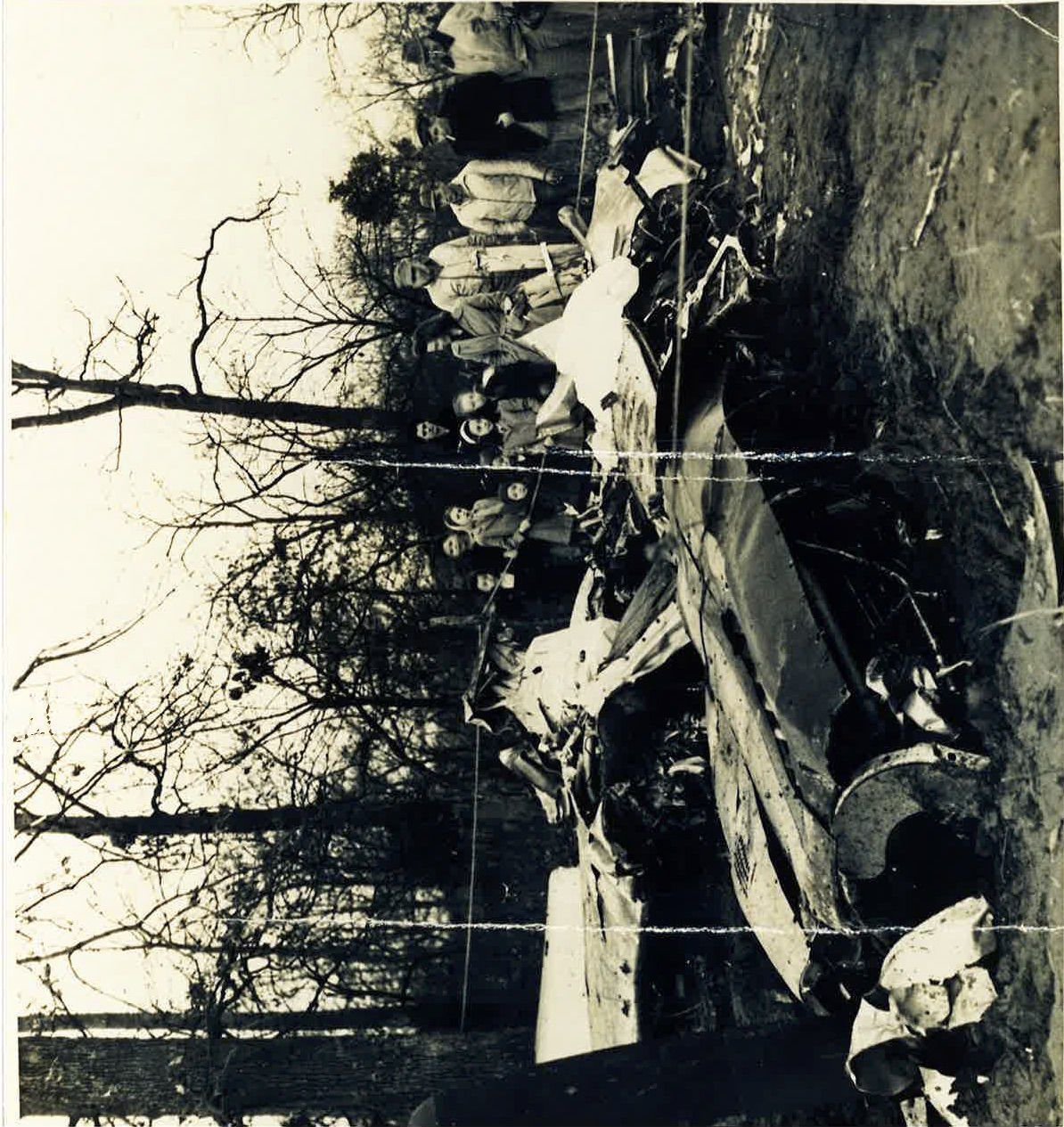 A photograph of Captain Thomas Mantell, Jr.’s plane crash on Jan. 7, 1948 on Lake Springs Road. The photo, taken by Tommy Hughes, is the only image on record of the incident. 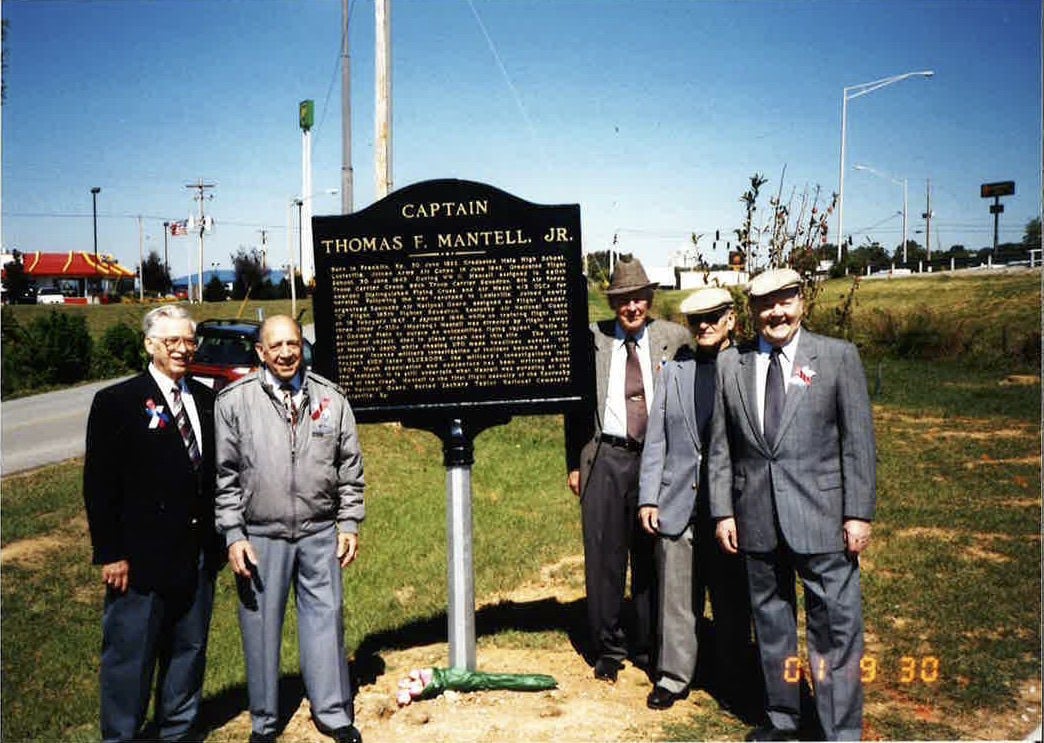 A photograph of Captain Thomas Mantell, Jr.’s plane crash on Jan. 7, 1948 on Lake Springs Road. The photo, taken by Tommy Hughes, is the only image on record of the incident.

The month of January marks the anniversary of an iconic local event.

In a January 1948 edition of the Courier Journal, it was printed that Mantell was going after an unidentified flying object or “saucer.

“I’m surprised it was revealed that they were looking for a flying saucer that quick,” said James Henry Snider, president of the Simpson County Historical Society.

According to a January 1948 edition of the Franklin Favorite, Mantell was a World War II Army pilot veteran participating in the Normandy invasion and was awarded the Distinguished Flying Cross for heroism along with other medals.

He was discharged from the Army in 1947, where he then joined 165th Fighter Squadron of the Kentucky Air National Guard flying P-51 Mustang’s.

Kentucky State Police was notified Godman Army Airfield at Fort Knox, Kentucky of people seeing an Unidentified Flying Object. According to an October 2015 edition of the Franklin Favorite the object was more specifically noted as being seen flying across Kentucky, Ohio and Tennessee cities.

In Ohio the reports were of a “flaming ball of fire” described by Staff Sargent Gale F. Walter and Corporal James Hudson, who watched the object for about 35 minutes from the patrol tower at the Clinton County Airbase in Wilmington, Ohio, the airbase was closed in 1971.

In Tennessee the callers reported a “bright blub-shaped object.” In Kentucky the Fort Knox airfield sent Mantell along with two wingmen, Lieutenant Albert Clemons, right wingman and Lieutenant B. A. Hammond, left wingman.

According to the transcripts from Godman Airfield, Mantell spotted the object and said, “The object is directly ahead of and above me now, moving at about half my speed. It appears to be a metallic object or possibly reflection of Sun from a metallic object and it is of tremendous size. I’m still climbing. I’m trying to close in for a better look.”

At 22,500 feet the two wingmen, Clemons and Hammond broke off due to lack of oxygen and went to Fort Knox to refuel.

In a January 1948 edition of the Courier-Journal it was reported that only one of the pilots had oxygen to sustain high altitude flying, Lt. Clemons.

The October 2015 article in the Franklin Favorite said, “it is believed Captain Mantell blacked out due to low oxygen, a condition known as Hypoxia, somewhere between 28,000-30,000 feet after which his plane fell from the sky.”

The article then went on to say that time of death was set at 3:18 p.m. since that was the time on Mantell’s wrist-watch when emergency crews reached him.

Many rumors flew around that the object might have been a star or a weather balloon, though no launch records were found — others thought it might be the planet Venus.

“Supposedly they told some stories that there were no parts, but obviously there were parts because there is a picture of it,” Snider said.

He said there were reports that the plane exploded in mid-air, but a pilot passing out doesn’t cause a plane to explode.

“There is another story told, he was very close to the Lake Spring School where he crashed and that it looked like his plane might crash toward the school, but that he made it a point to steer it where it didn’t hit the school,” Snider said. “Now if he did pass out due to lack of oxygen that story wouldn’t hold true.”

Snider said it became one of the country’s most famous UFO incidences and that the October 2015 article said it went down in the history books as the first death from a UFO.

He said a couple of years ago a couple came from New York just to see the exhibit and the piece of plane that was found on Alma Snider’s property.

Lisa Nix, a Simpson County Historical Society volunteer, said she had a local couple come in on the anniversary because they knew kept track of the event. The center received a call just last week from a man from Tennessee because he saw a television program on it the night before and called to see if there were any updates.

Nix said there are no updates and as far as she and Snider are concerned it is still an unsolved mystery and the truth may never be known about the crash.

The October 2015 Franklin Favorite paper reported that Mantell did not live in Franklin, Kentucky but he was born here and he died here. Snider said he always heard that Mantell lived in Woodburn, but newspapers reported Mantell living in Louisville, Kentucky.